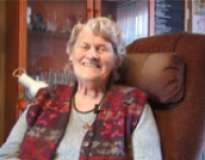 She had been given the phone number of the ward and used it to ask advice about her medication.

She had been given the phone number of the ward and used it to ask advice about her medication.

View topic summary
SHOW TEXT VERSION
PRINT TRANSCRIPT
But when I actually did come home that was the terrifying part. I was really frightened. You, you miss that all round support that you get, you know. And it always felt if anything went wrong, well there's always someone to turn to. But they did say to me 'If you're, any worries or anything,' gave me the ward number and 'just ring us.'

And I did ring that first day when I got home because I thought I had my medicine this morning, did I have any later on? And I just, I couldn't remember, I think I was just worrying so much you know. But, so I had a talk with the sister and so she said 'No you're all right, you've just taken,' with the blister packs it helps a lot.

Her symptoms got worse while she was speaking to NHS Direct and the nurse called an ambulance for...

Her symptoms got worse while she was speaking to NHS Direct and the nurse called an ambulance for...

View topic summary
SHOW TEXT VERSION
PRINT TRANSCRIPT
Well it was just Valentine's morning in 2001 and woke up, had my breakfast in bed, porridge and afterwards I got this little pain just right in the middle of my chest and I thought, 'oh my hiatus hernia.' And normally I can make myself comfortable, with eating something similar to porridge and I feel better but it didn't go away, it got more persistent and it wasn't a burning pain, it wasn't quite like it but similar.

And, this was about half past eight in the morning and my daughter lives with me so I, I called her and I said to her, I said, 'I'm having a lot of pain.' I wasn't sure, I thought, 'no it's not a heart attack,' it just didn't feel, you hear about all these crushing pains and all the rest of it, and it wasn't that and nothing, my arm was fine. And so I said to her, 'I'm going to ring the NHS Direct and have a word with them.'

So I did that and they were talking to me and so I said to her, 'I have a feeling it's my hiatus hernia, yet it's not quite the same as normally. So while I was talking to her I began to get a bit sweaty and I could feel myself feeling nauseous and I said to her, 'I think, I think I'm having a heart attack.'

So she said, 'Yes I think you are.' So she said 'Don't worry, I'll call an ambulance for you and you just make yourself comfortable, stay there, are you on your own?' So I said, 'No, I've got my daughter.' So she said, 'I'll stay and talk to you until the ambulance arrives.'

And she did this, and the ambulance came, it came quite quickly, it was no more than about ten minutes, and they were very good, gave me oxygen and so forth because I'm asthmatic as well and got me down to the hospital, the local.

Her daughter, who lives with her, bore the brunt of her bad days.

Her daughter, who lives with her, bore the brunt of her bad days.

View topic summary
SHOW TEXT VERSION
PRINT TRANSCRIPT
Well first [laughs], first of all if you moved much you know they were a bit worried [laughs] they're sort of keeping an eye on you all the time [clears throat] but when they saw that I was coping a bit better each day then it gave them a bit more confidence.

I think it was worse on my daughter because every now and then you have a bad day and of course she would be there so she's born the brunt of it really, she's been great. My family obviously were nervous first of all but when they saw I was coping with it fairly well, it helped them too.

My daughter was the biggest worry [laughs] because she would get my bad moments, you know and when the others had come it would sort of brighten me up.