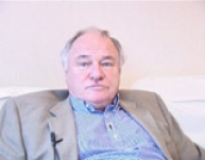 He had chest pain that got worse during the day.

He had chest pain that got worse during the day.

View topic summary
SHOW TEXT VERSION
PRINT TRANSCRIPT
I was Conservative Party Agent for the [nearby] constituency and I lived in [a different town]. I was 47 at the time. I was driving two of my children to their schools at about eight o'clock in the morning and as I drove, felt an almost finger-shaped sharp pain high in the chest and thought to myself, "That's  funny, I wonder what that is."

I dropped the two children at their various schools and went on in to my office in [nearby London] I had odd pains in the chest all day and I was preparing for a cheese and  wine party. I was buying cheese and things like that around the town and the pains were something I hadn't experienced before. At the party I drove various elderly ladies to the function and I was standing talking to my Member of Parliament and someone else and jokingly said, "I've got pains in the chest. I think I'm having a heart attack." And that was what it was, jokingly.

The function finished about ten o'clock in the evening and drove home through [town name] where I had a severe pain in the chest and tingling down in to my left little finger and the next one and drove on through it. I got home and said to my wife, "I've had pains in the chest," and she said, "You've been drinking and eating pickled onions and things, haven't you?" "Yes I have been indeed."

I went out in the car again, about I suppose quarter to eleven, to pick up my daughter from her boyfriend's about ten minutes away from the house. Came back in with her and sat down in an armchair and had a glass of red wine which had been left over from the party. With one sip, the pain came back and the family could see how distressed I was. They sent for our GP.

He felt exhausted after walking 50 yards to the newsagent a few days after he was home.

He felt exhausted after walking 50 yards to the newsagent a few days after he was home.

View topic summary
SHOW TEXT VERSION
PRINT TRANSCRIPT
I felt okay by then. I was pushing the tea trolley around the wards and dishing out the tea and I thought I was okay. However I went to make the bed on the first morning and realised I felt absolutely ghastly and very weak.

I was told not to go out for a few days and by the Saturday when my wife was home, where we lived at the time there was a newsagent about fifty yards away from the door and I went around there with her and found myself absolutely exhausted when I got back.

He returned to work part-time, then worked in another field for a few of years before returning...

He returned to work part-time, then worked in another field for a few of years before returning...

View topic summary
SHOW TEXT VERSION
PRINT TRANSCRIPT
I must say I was worried. I had a letter from my employers pointing out that I was only entitled at that time to two months sick pay. If I'd been working at that particular association a couple of months longer, I'd have been entitled to a year but I guess that was something they had to do but it was very upsetting. I went back to work part time after the two months, but I was finding it difficult.

It's an exacting job to do involving unnatural hours and a fair amount of stress. So a friend of mine who worked for himself in the Finance and Insurance Industry offered me a job running his office and from the following September, I did that. Until some years later I realised that I was working as hard at that.

By then had my own contract with Allied Dunbar, so I went back in to the Conservative Party as an agent again.

He walked the Great Wall of China two years after his second heart attack.

He walked the Great Wall of China two years after his second heart attack.

View topic summary
SHOW TEXT VERSION
PRINT TRANSCRIPT
We met at Heathrow, I'd never seen any of the people before; I didn't know any of them. They were mostly much younger than me. There were a couple of older ones. One chap I shared a room with from [town], who was the only other diabetic and there was one guy in his thirties who had a heart transplant.

But we boarded an Air China flight for Beijing, arrived there. I had made the mistake of ordering diabetic food, which one shouldn't do on an aircraft, I realise now. We saw the sites of Tiananmen Square and the Forbidden City on the first day. Then walked off to walk the lesser wall and I realised then despite having done some training on the hills around [the local area], how much of a challenge the Wall is and how fit all these other ones were.

But I must say, I got a great deal of support from the younger ones, many of whom were in nursing and things like that and they really fairly well looked after me, but I could party with the best of them.

There was a lady doctor who was the police doctor for part of South London and she walked with us. But the first day fell and broke her kneecap, but she kept up with, us, with a vehicle and her leg in weird Chinese plaster. And we walked different sections of the Wall each day; we did 20,000 plus steps, up and down, which someone counted, a lady from [town] I think.

About, I think it was 140km of the Wall in different bits and it was an amazing experience and I've kept in touch with a lot of people.