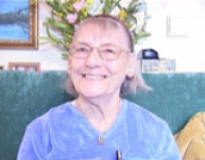 Her doctors gave her conflicting instructions.

Her doctors gave her conflicting instructions.

Oh they argue. They do, they do. Some wanted to operate, some didn't. Some said this was good. Some, one doctor come along and said “I don't want you to get out of bed at all, now you stay right there and you do not move for twenty four hours”.

Another doctor comes along, “What are you doing lying in bed, I want you walking up and down this ward.” I said, “well I don't know how I'm going to lie in bed and walk up and down the ward at the same time, it cannot be done doctor.

It can't be done. Doctor so and so told me to lay in bed, you're telling me to get up.” And he marched off, so he probably went and had a row with the doctor that said this before, I don't know what happened. So I compromised and stayed in bed for a while, then I got up for a while, it seemed to work.

Her muscles seized up so her doctor took her off the statin.

Her muscles seized up so her doctor took her off the statin.

View topic summary
SHOW TEXT VERSION
PRINT TRANSCRIPT
I couldn't take the cholesterol tablet because I got seized up all my muscles seized up. And thought well I don't suffer from arthritis I never have, why can't I walk. I got out of bed and fell on the floor.

So I crawled to the toilet and then I crawled back again and I thought something's wrong and as I made myself get up, and there was tears running down my face, I must get up, I must stand and I was in terrific pain but gradually the pain went.

Next day same thing. So I saw the doctor and he said, 'Ah' he said, 'yes I know what's happened. It's these tablets, cholesterol tablets no longer agree with you so we'll stop them.' Stopped them, no problem, no problem at all.

He gives me the cholesterol test every so often, I've got to go for another one in December, so that's, he's keeping an eye, an eye on that. There might be something he can give if he finds the cholesterol is getting too high.

Her doctors disagreed about whether she should have bypass surgery at her age.

Her doctors disagreed about whether she should have bypass surgery at her age.

View topic summary
SHOW TEXT VERSION
PRINT TRANSCRIPT
Well I had several nasty attacks in the hospital but they said well perhaps it would be wiser to just let things go for a while and see what happened. This went on for about six weeks and then I had a really nasty one and

Is this another heart attack?

I ended up in intensive care and then I ended up being taken to [the specialist] hospital where the same thing happened again. You're too old to be operated on.

We might lose you on the table and we don't want to do that so we'll see how it goes. Well this went on for another six weeks and then the doctors came and said, 'I think you better go home because it's too risky to operate on you, you know your chest is not all that good.'

He said, 'we've got to be perfectly sure that you're strong enough to go to the theatre and go through the operation.' So I said, 'Well I'm sure I'll be alright, I'm sure I will.' He said, 'I'm sure you will but I'm the only one.'

So they were getting me ready in the morning, had my breakfast, got up, went to the bathroom and had another heart attack. Right out, that's it.

Well along comes the surgeon who said he thought he could do it against the advice of all the others but he got the vote that day. And I was taken down to the operating theatre and operated on and it was a success.

You see I could quite understand they don't want to lose a patient, it's not good for them to lose a patient and if the chances are 50/50, I think they'd rather take their 50 on their side and have you die at home than on their table.

That is fair enough, but then from the patient's point of view, who hasn't got much chance anyway, she would rather take the chance on the other side of the 50 and go ahead.

She took plenty of exercise and plenty of rest, which helped her to recover from bypass surgery.

She took plenty of exercise and plenty of rest, which helped her to recover from bypass surgery.

But you can't do it suddenly; you've got to do it gradually. You've got to float around like some injured bird for a little while until your wings have healed and then you can go out. Plenty of exercise within reason, even if it's only slow walking. Slow walking and then you get faster, you get to be able to speak to people for longer periods and you get to be able to pick up where you left off. I did.

I made myself do it but I didn't overdo it, when I was tired I went to bed. Not set up but laid out, went to bed so that every part of my body was relaxed. I didn't care what people thought I went to bed whenever I felt like going to bed and maybe for just an hour and it was enough and then you get up and go again. It's just plain common sense I think.

She chose not to attend a cardiac rehabilitation programme and used the Heart Manual instead.

She chose not to attend a cardiac rehabilitation programme and used the Heart Manual instead.

View topic summary
SHOW TEXT VERSION
PRINT TRANSCRIPT
I felt I could rehabilitate myself, which I did. I didn't want to be; I didn't want to be mixed up with other people's reactions and feelings. I wanted just to have my own and sort my own out and right or wrong I did it. But no, the doctor asked me and I said, 'no, I'll do it', I said, 'I'll do it myself.' I didn't want any help to climb the mountain because if somebody fell down I'd fall down with them. I'd rather do it myself.

Oh Yes, yes I read it. Yes that's very helpful, I think all these manuals, all these leaflets and questions and answers that other people have gone through before you and experiences of doctors as well, it's good to read because you can pick out something that goes with what you have already said or done and think.

And you, and you, you felt it was better for you to just use the heart manual [R' Yes, I did] and work through that week by week?

And I used to just lay on the settee, which wasn't here then, it was in the other house, and just read and get really involved with it and then ask myself questions and then think, you know, oh yeah well yes that could happen and perhaps that's what happened to me, and you either agree or disagree but it gives you something to do.

It's obviously knowledge because without books you wouldn't have any knowledge would you unless somebody talked to you forever. Yeah, I think the leaflets and the books, which I always read are very helpful. Sometimes you wouldn't agree with them but it depends on your own experiences wouldn't it, it just depends.

Think positively and give your body time to recover after bypass surgery.

Think positively and give your body time to recover after bypass surgery.

If the healing doesn't go as quick or as well as you think, then sit down and think why, what am I doing wrong? Am I pushing myself too much? Am I not having enough exercise? And I would say, I would suggest talk to the doctor and see whether he comes up with anything but mostly if you're sensible, you'll come up with something yourself.