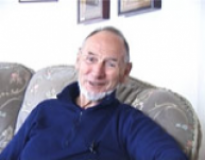 He advises others to wear running shoes for the treadmill test.

He advises others to wear running shoes for the treadmill test.

View topic summary
SHOW TEXT VERSION
PRINT TRANSCRIPT
I had my first thing at [the hospital], you know you go back and they assess you and you run on the treadmill. I was running flat out. I said "If I'd known I was going to be running flat out like this I'd have brought my trainers." I went in walking shoes, because I thought oh they'll only let me walk.

He found it hard to reduce his intake of saturated fat when his wife's diet had not changed.

He found it hard to reduce his intake of saturated fat when his wife's diet had not changed.

View topic summary
SHOW TEXT VERSION
PRINT TRANSCRIPT
So I said to her "It's very difficult sitting here watching you eating chocolate and cake," and she'll come in with a big chocolate sponge sandwich, cream with chocolate on top and I said "Well I can't really," you see I don't feel I can allow any fat now to build up.

And I said "It's no point in me taking a statin every night if in the day time I'm eating chocolate, chocolate cake and what have you. I have milk still, I buy the green top milk which she hates and if she went for milk, which she doesn't, but if she did she'd come back with blue top. And I said "Well no I have to cut down."

And you know, but she doesn't see why she should give it up so I have to sit here and watch her eating which is difficult because I like chocolate the same as her. When she was at home there last month she was home for two weeks and I, looking in the cupboard one day, you see if she's not here and I'm feeding myself that's fine I won't even buy anything that's fattening.