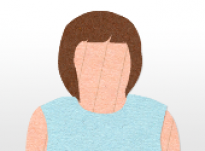 Age at interview: 13
Brief Outline: Reg has been attending a weight management programme for young people. She thinks it's important for parents to let their kids know that it doesn't matter that they're overweight and should help them by joining in. Ethnic background: White British.
Background: See 'brief outline'.

Reg has been attending a weight management programme for young people. Reg says she started gaining weight when she was five and was bigger than the other kids at school and couldn’t fit into the right size clothes for her age. Reg says she finds it difficult to understand why she’s overweight, because she eats vegetables and used to be quite active, going to dancing every night. She puts it down to her genes because most of the female members of her family are overweight.
Reg was seeing a dietitian who gave her meal plans and told her to exercise more, but Reg says this didn’t help so she was referred to the weight management programme. Reg says the dietitian told her that her friends were only her friends because of her size, which really upset Reg and made it hard for her to trust people.
Reg says she felt embarrassed about exercising because of how she looks and because she would always be slower than everyone else. She says things have been easier since she started secondary school because there’s more of a variety of kids there. Reg has also found it difficult at times because of the foods they have in their house for her younger brother. She feels it’s unfair that he seems to be able to eat what he wants. Sometimes, she says she gives in to temptation.
Since she’s been attending the weight management programme, she has lost weight and her body shape has changed. She says she used to be “like a big blob” but now she says other people have told her she’s starting to get more of a womanly figure – although she’s not too sure and still sees faults with her body. Ideally, Reg says she’d like to be a size 10, but she says it’s more realistic that she aims for a size 12.
Reg thinks it’s important for parents to let their kids know that it doesn’t matter that they’re overweight and should help them by joining in. She says sometimes kids and parents can feel like they’ve done something wrong.

Reg says that half her family is overweight so all she can do is try her best.

Reg says that half her family is overweight so all she can do is try her best.

View topic summary
SHOW TEXT VERSION
PRINT TRANSCRIPT
Well, I've always been an overweight kid. So my mum's always referred me to the doctors.
And when you say you've always been overweight, how far back would you say?
Since about four or five. I think.
How did you know that you were overweight? What made you think you were overweight?
Well, I was bigger than the other kids at school. And I couldn't really fit into the right size clothes and stuff like that. And then I used to get bullied sometimes as well. So, that's just what let it on.
I've always liked eating vegetables, so we didn't really understand why I was overweight. And I did quite a lot of exercise as well because I used to go dancing nearly every day of the week. So, we just really didn't understand.
Have you got an ideas about what made you overweight?
No not really. I know it sounds funny but I think it's genetic because half of my family, half of my family on my mum’s side are overweight. And all the women on my dad’s side are overweight. So.
So you think it's just in you genes that...?
I think so yeah.
So do you think there's anything you can do about it then in that case?
Just try my best.

Reg finds it very difficult to cope with having her little brother's 'nice' food around the house.

Reg finds it very difficult to cope with having her little brother's 'nice' food around the house.

View topic summary
SHOW TEXT VERSION
PRINT TRANSCRIPT
And so when you said that you keep having a relapse, what do you mean by relapse? Explain?
Well, you do really well and then you like think, “Oh I'm going to have a chippy”. And then you're like, “Oh I'll start that tomorrow”, but it never happens. And…
And why do you think that happens?
Well, I've got a younger brother and we've got all these sort of stuff in house for him and then that's just like a bit, a bit of a temptation. So, it's a bit difficult.
Is it hard to control yourself when there's kind of temptation around?
Yeah.
Yeah. And how old is your brother?
He's, I think he's seven now.
And does he have any problems with his weight?
No.
No. Right. And so, I mean from what you're saying, are you saying that you have to kind of watch what you're eating?
Yeah.
But he doesn't have to?
No.
How does that make you feel?
I think it's unfair. And sometimes when he gets right nice stuff and I'm sat there eating, I don't know, fish, chips, and mushy peas and it's just not right.
And what does he have then that's nice?
Pizza. He has, when his friends come over, he's got like them chocolate dips and he has them like once a week. And we've always got sweets in the house as well and ice cream. And crisps.
Right.
So, it's difficult.

Your child will feel more supported if you do things as a family.

Your child will feel more supported if you do things as a family.

View topic summary
SHOW TEXT VERSION
PRINT TRANSCRIPT
Just because your kids are overweight doesn't mean you can't be like, if some people are embarrassed of them because they're still your kids. And even though you love them,  they do have their faults like me and them faults make them what they are, so live with it [laughs].
If you think about it some people are like, “Oh I know my kid's overweight, but who cares I still love them”.
And people picking up on their kid’s being overweight and sometimes it makes them feel a bit, “Hmm what I have done wrong?” and sometimes it makes them feel like, “Why, why me?”. And that's exactly what the kids feel like as well. But obviously it's like people in the family are worried about them. And them worries can lead to different stuff. And, but if you believe your kids can do it, then believe in them, and make sure that they know you believe in them.
Family, what can they do then that would help do you think?
Well, they could get all the family members into what you're doing, to try encourage you. Get them to do like exercises, try different foods and just make them feel like they’re part of what you're doing, instead of making them feel like they've got to be excluded from family activities.

Reg worries about what excess fat does to the body. She thinks life would be better without it.

Reg worries about what excess fat does to the body. She thinks life would be better without it.

View topic summary
SHOW TEXT VERSION
PRINT TRANSCRIPT
Do you think it's important to be thin?
I don't think it's very important. But I think it's quite a big, it's got a bit of importance to it.
Why?
Because when you're overweight, the fat around your organs is quite, quite serious because it can restrict your breathing. And it can get your arteries clogged and stuff like that.
Do you worry about things like that?
Well, I do worry about it. But I don't think I'm as bad as a lot of people because a lot of people are load-, really a lot bigger than me. And I'm more worried for them than I am for me because I'm not as big as people think I am.
Why is that important?
Because well it's the fat thing again, because without the fat, then you'd be able to like do stuff that you'd never think you'd be able to do. And it’d just be a lot healthier for you. And you'd be able to live your life without faults and yeah.
And what kind of thing would you be able to do? What kinds of things do you mean?
Run faster. Run distances without getting too out of breath. Doing exercises without getting too out of breath. Probably, I don't know. I'd say go out in a skirt without leggings.
That’s what I would say [laughs].

Reg has become more confident since she joined the SHINE programme.

Reg has become more confident since she joined the SHINE programme.

View topic summary
SHOW TEXT VERSION
PRINT TRANSCRIPT
How long have you been coming to SHINE (Self Help Independence, Nutrition and Exercise)?
About three, three or four years I think. Since I started comp, so it’s about three years.
And what other sorts of things have you done that have helped with your confidence?
Well, there’s role play - I've already said that – we sometimes show our works of other people and talk about it. After they've done the course, like all the, yeah the course. There's like a little sort of awards ceremony. And they've just started doing like shows, where they can perform their talents so that's good.
And so you've been involved in all those things?
Yeah.
And, so because you did the program to start with and now, because I can see it on your T-Shirt, you're one of the assistants?
Yeah.
So what does that mean?
That means I like, I help out with the new group and I also help out with dance and swimming and stuff like that.
And you like doing that?
Yeah.
Why?
Well, it's because it's something I enjoy doing. And since I started it's sort of like made me feel better about doing it myself. And now that I help out, it's nice to see that other people are trying their best to get into what they're doing.
Yeah. And what would you say the best thing about SHINE has been?
Meeting new people, definitely. Because you meet new people like we're different religions and disorders, and but you understand what they’re like because… I don't know, because you’ve met other people like them before and it's just nice to help out.
Previous Page
Next Page