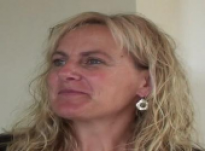 Age at interview: 42
Age at diagnosis: 23
Brief Outline: Gabrielle has experienced depression and anxiety for twenty years after experiencing postnatal depression. She has been hospitalised a number of times. She is currently taking antidepressant medication and seeing a psychologist and a psychiatrist. Gabrielle has used her own experience to help a local post-natal support group for new mothers and to help her interact with her patients in her nursing work.
Background: Gabrielle works as a registered nurse. She is married with one daughter. Ethnic background' Anglo-Australian.

Gabrielle experienced ‘severe post-natal depression’ after the birth of her daughter when she was 23. She described herself as being ‘anxious, fearful and suicidal’. Gabrielle thinks that this could have been a ‘drug-induced psychosis from narcotic pain medication’. She sought help from a psychiatrist who prescribed antidepressant medication, while family and friends advised her to ‘concentrate on the baby’. Gabrielle didn’t sleep and had difficulty maintaining her weight. Because there were no services in her area, her sister investigated interstate options and found a clinic interstate. After hospitalisation, Gabrielle remained interstate with her daughter. At that time the relationship with her partner ended. She continued to work part time as a nurse and received intense psychotherapy. During his time she was hospitalised on a several occasions. She then met a new partner and together with her daughter moved to another city to form a new family with her new partner and his children. Gabrielle found a psychiatrist for herself and a child psychologist to help her daughter, who had been affected by the separation.
Life and work stress later became too much for Gabrielle and she described herself as ‘becoming manic’. She couldn’t sleep and would often walk the streets all night. She was again hospitalised a number of times. She says that both the ‘private and public hospitals and staff were wonderful’. When her mother was killed in an accident and her partner left her, Gabrielle was too unwell to care for her daughter. Her daughter lived with her father, and she lost contact with her stepchildren. This was devastating for Gabrielle who then returned to her home state, although she doesn’t remember how she returned and estimates she lost all memory of a roughly two-year period. She reflects that this is in part due to the seriousness of her illness at that time. She was hospitalised when she returned to her home state and received ECT therapy. After more psychotherapy she began part time work and was able to live with her daughter again. Gabrielle met her husband during this time.
She currently takes antidepressant medication. She thinks that depression is both a ‘chemical imbalance' but is also 'a spiritual and social illness’. Spirituality is an important part of her life, and affirmations are a daily part of her mental wellbeing. She has also used her own experience to help a local post-natal support group for new mothers and to help her interact with her patients in her nursing work.
An important part of getting better for Gabrielle has been getting enough sleep, and she also takes multivitamins and fish oil. She has accepted her mental health condition as part of who she is. She believes that humour is an integral part of her recovery and that loving her daughter fully is wonderful. She would like to see better specific post-natal care for women in her local area and believes that access to this is very important. Gabrielle is ‘open and honest’ about her experience.

Gabrielle thought a chemical imbalance was one of several factors contributing to her depression.

Gabrielle thought a chemical imbalance was one of several factors contributing to her depression.

Gabrielle described a GP she saw while experiencing perinatal depression who was both helpful and...

Gabrielle described a GP she saw while experiencing perinatal depression who was both helpful and...

View topic summary
SHOW TEXT VERSION
PRINT TRANSCRIPT
Having - oh yes, you've got to have - goodness yeah. You wouldn't get through it otherwise. When you're that unwell you're constantly ringing - you don’t know what you're doing. You're crying, you're, having panic attacks, you're, doctor - oh. I remember one GP came out to me and I was, very unwell. And he said to me look, I'll get someone in to do your vacuuming, and I'll leave you with these tablets. And it was very inappropriate. The medication - I was breastfeeding, and they were tablets that weren’t too good for the baby. And he left me with a huge box full, and I was suicidal.
So that scared me even more [laughs]. Like, so, if you're a worrier and you, - just inadequate things. That was 20 years ago. I don’t think that - I hope to God that wouldn't happen now. I had the sense to give the tablets to someone and say take them away.

Following improvements in her health as a result of medication, Gabrielle kept working part time but moved to a less stressful area of the hospital she was employed at.

Following improvements in her health as a result of medication, Gabrielle kept working part time but moved to a less stressful area of the hospital she was employed at.

View topic summary
SHOW TEXT VERSION
PRINT TRANSCRIPT
I went – so this psychiatrist tried me on more medication, which helped me get into a sleeping pattern. I continued to work as a nurse for the last 19 years, to keep up a job, to say I can do it. I didn't keep up in a very high stressful area, but I remained employed and I remained to be a nurse, which was my saving grace.
I did that. I came back, got myself a job back at (town name) Hospital; so I had to be brave and say I can go back; and I can't go back being the emergency nurse that I was - that I was so proud of - but I'll just have to do a little bit of part time work; just to keep my, - get me out of the house and keep me alive basically. I started work part time.

Gabrielle used Alcoholic Anonymous publications, along with the Bible and other self-help...

Gabrielle used Alcoholic Anonymous publications, along with the Bible and other self-help...

View topic summary
SHOW TEXT VERSION
PRINT TRANSCRIPT
I constantly read, affirmations; every day, still. I got hold of a little guide book for Alcoholics Anonymous, and I don't know if you've ever seen their little book they have, that they carry with them wherever they're going. And it, and it's based on some Bible, readings; some teachings; and some little affirmations. And just to - just something to read you to - help you - just to help you along the way; to reassure you. And I pick that up every day.
Before I go to sleep I read my Louise Hay affirmations. I just open it up randomly and read a bit. And I think oh yes, I was meant to read that. And, my little AA book is - I didn't use that for giving up alcohol. I just used it because I really liked the little passages in it, and, and it helped me, - I am that type of person. I think on a deeper level. I, - and that is a comfort to me.
I remember when I first picked up a Bible. I, I went through a Catholic upbringing, so always had a belief in God; but never took it seriously; like yes, we'll go to church. Yeah on a Sunday, but never went to church as an adult.
I remember when I - I remember being in hospital and picking up a copy of the Bible, and I just held it. And I didn't read it. I just held it. And, as life went on, I then used to progress to going to sitting in a chapel. And then, I would start a process of lighting a candle and saying a prayer.

Gabrielle talked about the complementary approaches she used, and also mentioned the importance...

Gabrielle talked about the complementary approaches she used, and also mentioned the importance...

View topic summary
HIDE TEXT
PRINT TRANSCRIPT
If I can sleep I can get up, I can face the day. There's lots of things you can do to –the feeling of getting up when you're not medicated is something that only people who go through it know what it's like.
I think it's really unfortunate, ah - there was a stage, for a few years, where I relied on alcohol. it's not the answer.
Ah, but I understand why people use it. And I can honestly say it's also worth coming the other side of it.
So do you drink now?
Ah, I will at - probably two glasses a month.
Right. And was that sort of a conscious decision...
Yes.
I'd be dead.
Also what I chose to do - which I think has helped me a lot - is, use a multivitamin - vitamin C and fish oil - every day. And I also gave up smoking. I smoked about 30 a day. I don’t smoke anymore either. And I'm sure a combination of my medication, my vitamins and everything else - they all help. It's not, just one thing.

Gabrielle said she tried different antidepressants and sleeping tablets until she found a...

Gabrielle said she tried different antidepressants and sleeping tablets until she found a...

View topic summary
SHOW TEXT VERSION
PRINT TRANSCRIPT
I - the medication is something that is - should be looked at as a one on one type thing. It shouldn't be looked upon as a class of medicines that say okay, you've got this symptom; that will help it - because I think it - they react to people differently. And it really does clearly need to be, observed closely with your, health team.
So you had some not so good reactions with some medications?
Mm, yeah. I, I would have the reverse effect. Instead of it calming me down it would make me manic. And I'd be totally like, not with it. I tried lots of medication. I tried herbal remedies, but when I, I - I've been on two medications - two antidepressants - now for the last few years, with two other medications, and that's the best I've been. This is the best I've been.
They're old - it's an old style antidepressant. I take Anafranil (clomipramine) of a night time, and that helps me sleep. Also of a night time I take Seroquel (quetiapine) and one clonazepam, and that enables me to actually sleep. I wouldn't sleep otherwise. And then I'll take Prozac (fluoxetine) of a morning.
They're all, at the moment, being weaned down to lower doses for me. and that's a - I'm extremely lucky to have come across a very good, GP who is very with it and very, on the ball in regards to how you're feeling, how to judge it, what to do. And she is, keeping an eye on me while I'm weaning, and I, my psychiatrist, yes.
Previous Page
Next Page