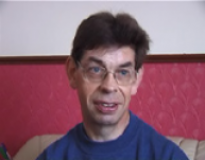 View topic summary
SHOW TEXT VERSION
PRINT TRANSCRIPT
Can you remember all the different drugs that you've tried over the years?

The first one I can remember was Mysoline and then they I started taking Epanutin with that. And then I took a third drug, Tegretol, so I was taking three drugs for quite a while. Obviously I needed three drugs and it's been, I've been changing to other drugs, Epilim I was taking, I didn't like that because I was putting on weight, that was Epilim. As I say I'm taking Tegretol and gabapentin and I've also taken Sabril, that's another drug which I started taking before it got on the market. I can't remember any of the others.

So the drugs that you're on now are working well for you?

Are they controlling the seizures or making them less frequent?

They make them less frequent yes and because I'm off work that's taken the pressure off as well.

And have you always been quite positive while you've been waiting?

I think so, yeah I know I'll get there in the end. Its been a long wait as I said but I just overcome it. I've not worried about it even though I'm a worrier, but I've always tried to forget it, this is why I tell people forget it and just get on with life. Don't just think about epilepsy because I think if you forget it you won't get so many attacks.

Explains that he is wary of changing jobs because of the difficulties with finding work in the past.

Explains that he is wary of changing jobs because of the difficulties with finding work in the past.

View topic summary
SHOW TEXT VERSION
PRINT TRANSCRIPT
I started work back in 1969 at the hospital and before that it was difficult for me to get a job, every time I mentioned the word [epilepsy] they didn't want me. They just refused to give me the job and this is how it went on over a year, so it was a bit depressing. Having to keep going again and again back to the Job Centre and find another place to go, it was a bit depressing then. And eventually the job which I'd been doing was found for me by a professor of the hospital and that's where it all started.

Well it's the way all epilepsy sufferers are concerned about, if they get a job then they're lucky and they've just got to hang on to it otherwise they may not get another job if they give it up. This is what I've been thinking in the past, worried about getting another job if I leave this one.
Previous Page
Next Page