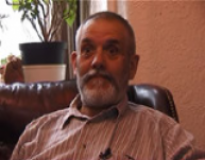 Age at interview: 57
Age at diagnosis: 30
Brief Outline: Diagnosed with epilepsy in the mid to late 70s. Seizures have been controlled since around 2000. Current medication' carbamazepine (Tegretol) and topiramate (Topamax).
Background: Retired newspaper librarian; single, no children.

Recalls losing consciousness and waking up in hospital.

Recalls losing consciousness and waking up in hospital.

View topic summary
SHOW TEXT VERSION
PRINT TRANSCRIPT
Well um, I think about the first attack I had that I can remember was when I was on my way home from a handicapped holiday. Because I used to do a lot of helping with handicapped people through the St John Ambulance, and I was driving at the time and luckily we had stopped at a, you know, a restaurant on the way back, where we normally stopped'

And the next think I know I was in one of these little country hospitals.

I'd just gone down and, but they gave me you know the once over and everything, and you know kept me there I think for, I think it must have been about an hour maybe. And they took me back to the, they couldn't find anything wrong and they just took me back to the caf' and let me drive home. And nothing else happened after that but I think it must have been oh, ages you know, it might have even been a year and then I had two, I think it was two within about a week. The same sort of thing you know, I just sort of collapsed.

Describes how his dog helped when he was having a seizure.

Describes how his dog helped when he was having a seizure.

View topic summary
SHOW TEXT VERSION
PRINT TRANSCRIPT
Now there was, we used - you can see the picture over the back there - our old dog, we lost him a couple of years ago and he always used to sit in there, and that's my chair. Now sometimes if I was um, having a funny turn it's weird because, sometimes if you just sort of flop off into a thing, people don't realise it you know. But he would, it was weird really because he would be there pushing and that, or he'd go and tell somebody else; it was weird really, you know how they knew. You know it's funny.

So he would alert somebody else?

He would alert somebody or try and push you, you know to sort of rouse you, it was weird really, you know if you were sort of um.

Did you find that quite reassuring?

Yeah, it's funny really because there was somebody there you know what I mean, really, yeah.

Yeah a couple of times you know, I mean, when you sort of pull yourself round, you know when came and there was him sitting there and pushing you know, on his chair. Weird really.