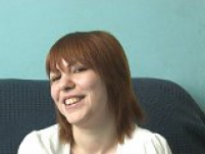 Age at interview: 16
Age at diagnosis: 15
Brief Outline: Rania has tonic-clonic epilepsy and Asperger's syndrome. She is on 600mg sodium valproate twice a day. She has seizures most nights and one every few weeks in the day time.
Background: Rania goes to college and lives at home with her family. Ethnic background / nationality' Mixed (White and Arabic).

Rania is 17 and goes to college part-time. It took her a long time to get the epilepsy diagnosis as she was told that she was just faking the seizures or seeking attention. She says she almost started believing herself nothing was wrong as everybody kept telling her that. She finally got the diagnosis when she was 16 and went to see a doctor privately. At this time she was also diagnosed with Asperger's Syndrome and attention deficit hyperactivity disorder (ADHD). Rania says the epilepsy diagnosis changed her life a lot and gave her much more confidence. She now has a tonic-clonic seizure every few weeks in the daytime but nocturnal seizures almost every night. She is on sodium valproate 600mg twice a day. She has also been on GI (Glycemic Index) diet for a year which has helped her manage the seizures.

She went to a private primary school which dealt with everything to do with epilepsy very well. Later, in secondary school things have been hard for her at times. She was having a lot of seizures in class and the teachers and other students weren't always understanding. Her mum has been in touch with school to inform them of her condition and what it requires. Now, due to her frequent seizures, she is doing her college course part-time but says she'd much prefer being a full-time student as she feels there 'not much point' in it otherwise.

Rania has her ID with her personal and medical details on her whenever she goes out. Sometimes people think she is drunk if she has a seizure in public and was once stopped by the police for being drunken and disorderly. At home she is careful not to use the kettle or glass cups so that she won't hurt herself if she has a seizure. For the same reason, she can't do the cooking or the washing up, which she doesn't mind that much! Rania says epilepsy “doesn't make a difference to who I am, just to how I live my life”.

Rania goes swimming only if there's a lifeguard at the pool. She also goes to the gym and does...

Rania goes swimming only if there's a lifeguard at the pool. She also goes to the gym and does...

View topic summary
HIDE TEXT
PRINT TRANSCRIPT
I can't swim. I know how to swim and everything but I'm not meant to. Unless the place is insured and there is a lifeguard. I can do most things and I do martial arts. And I'm allowed to go the gym and that but I have to be careful of using the equipment and that. You can't stop, you can't change your life completely, but you still have to take into sort of, you have to tell the people, the assistants and the people there so they're constantly watching as well.

Rania follows the GI diet which she feels helps both with her epilepsy and ADHD. This includes...

Rania follows the GI diet which she feels helps both with her epilepsy and ADHD. This includes...

View topic summary
SHOW TEXT VERSION
EMBED CODE
PRINT TRANSCRIPT
I try to make sure that I've slept well and I follow the GI [Glycemic Index] diet to control my blood sugar levels. Yeah. I make sure I don't get over hot, and obviously stuff where I might come in contact with you know lighting effects and that.

Are you on the diet particularly because of epilepsy?

Well it helps but I found that it also helps with the ADHD as well, and, yes just that really [laughs].

Can you tell me more about the diet? What it involves? What you eat, what you don't eat?

It's things like substituting things like, you substitute white breads and pastas and that for wholemeal, and you balance out the protein and the carbohydrates and vegetables and that. They're advertising it a lot now on TV and that, by, and they use colour charts, red, yellow and green.

And how long have you been on this diet?

For almost a year now.

And you've noticed a difference?

Well, it stabilises the blood sugar levels because I have to have a kit to make sure that they're okay every so often. Yeah, and, basically, the decrease in caffeine helps me sleep and that. Yeah and there's not so much processed food in my diet.

So no artificial things and preservatives in the food?

Do you find it difficult to follow that diet?

Sometimes. But it's not that hard really. Yeah because most places now are sort of advertising it everywhere and all the celebrities are following it now, so that helps.

Rania got much more support and passed all her exams after she changed secondary schools.

Rania got much more support and passed all her exams after she changed secondary schools.

View topic summary
SHOW TEXT VERSION
EMBED CODE
PRINT TRANSCRIPT
When I was younger and at primary school I went to a private school and they dealt with everything really well. But I remember having some difficulties, being unable to understand the questions and you don't really want to ask for help all the time as well so you just sit there not knowing what to do half the time. And then when I got to my first secondary school it got a lot more difficult. Because the teachers would complain and say I was just acting up and being difficult, and they couldn't really deal with the epilepsy or the ADHD and it just got out of hand so, I had to change schools. And in the next school they were a lot more supportive. They explained everything and they were able to cope with my seizures and you know deal with it and you know they used to send the work back and explain everything and I managed to pass all my exams while I was there.

Rania's confidence improved a lot after she got the diagnosis and it helped her to stop being...

Rania's confidence improved a lot after she got the diagnosis and it helped her to stop being...

View topic summary
SHOW TEXT VERSION
EMBED CODE
PRINT TRANSCRIPT
Well, it changed my life a lot once I got the diagnosis because you know I knew that there was something wrong. I'd get the medicine, it improved my confidence a lot more as well. Before I used to, all this going through all them doctors and them telling me all that stuff. I didn't really do much or socialise with people that much in case they all saw me as, you know that kind of person. After I'd got the diagnosis I was more confident I just went out and spoke to people and did things.

A taxi driver refused to give Rania a lift after she'd just had a seizure - she felt groggy and...

A taxi driver refused to give Rania a lift after she'd just had a seizure - she felt groggy and...

View topic summary
SHOW TEXT VERSION
EMBED CODE
PRINT TRANSCRIPT
I'm completely unconscious, and I just stiffen up and sort of spasm. My muscles tense up and that so I get a lot of injuries through it you know. And then they usually last well, one that isn't bad will last under 5 minutes. A bad one would be, well one that doesn't last five minutes you know I won't come round, then I stop for say 2 to 3 minutes, and then go into another one, and then possibly another one, and you know and need oxygen. But when I come round I'm sort of groggy and that and I get sometimes slurred speech from lack of oxygen, so I've been accused of drinking before, or being drunk. So that's quite difficult as well because we were trying to get a taxi home once and the taxi service refused me saying that they weren't going to take me because I'd drank too much and sometimes you get stopped by the police, yeah. I think once I got in trouble for drunk and disorderly.

Rania was told her seizures were 'attention seeking' and she was told just to exercise 'mind over...

Rania was told her seizures were 'attention seeking' and she was told just to exercise 'mind over...

View topic summary
SHOW TEXT VERSION
EMBED CODE
PRINT TRANSCRIPT
When I was younger, I just, I didn't really you know notice it, or see it as anything. I remember things like I use to fall down stairs or like that, but it's only when I got older, you know, into my teen years and I realised that there was something wrong. 'Cos you know I was passing out everywhere and having seizures, and I was told I didn't have epilepsy, and that, well I was diagnosed with it as a baby and I got told I'd outgrown it when I was eight. And that's about it really, there was nothing wrong, and it was you know just feinting or attention seeking they, I got a lot of different reasons from different doctors as to why.

What sorts of reasons?

Well one doctor thought it was attention seeking, another one kept speaking to me, saying it was due to mental issues and was speaking to me about mind over matter and explaining that if you want these sort of things to happen they will and that. And that was just about it really.

And how did you feel when people kept telling you know it's this, or its faking? Do you remember at that time how that made you feel?

Sometimes, you just, you know there's something there but at the same time you're doubting yourself.

You know when people tell you there's nothing there and that, and you have so many different people saying oh it's nothing, you sort of think well you know it probably is nothing because it's only me that thinks it is so.

Yeah. Did you challenge the doctors? Was it possible to say to them look this is what goes on for me everyday?

After a while you just sort of give up and think they're not going to believe me anyway, whatever I say, maybe I am just you know making it up or it's all in my head.