Ending a pregnancy for fetal abnormality 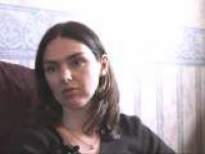 She felt something was not right about the pregnancy (her baby had Down's syndrome) and had told...

She felt something was not right about the pregnancy (her baby had Down's syndrome) and had told...

View topic summary
SHOW TEXT VERSION
EMBED CODE
PRINT TRANSCRIPT
Obviously at that point it was very shocking. It, I won't go as far as to say it was unexpected, it's very strange thing to say, but from the moment I was pregnant I felt like there was something not quite right.

I know people have said to me, 'Oh you're just pregnant, you're worrying,' but I'd already had one daughter and things were fine. This was a very, very strange feeling, it was right at the beginning, it was this underlying feeling that something wasn't quite right. And I honestly thought that in the first few months I might have miscarried - that was the feeling.

And I actually confided in a close friend of mine. She'd lost a baby at 31 weeks with a heart defect, so for me to confide something like that in her, it would be very serious because I didn't want to upset her, but it was very strange feeling that something wasn't right.

Describes how the consultant encouraged her to look at the baby on the screen as he was doing the...

Describes how the consultant encouraged her to look at the baby on the screen as he was doing the...

View topic summary
SHOW TEXT VERSION
EMBED CODE
PRINT TRANSCRIPT
I was nervous about having the amniocentesis, and I was also nervous because I read and I was told by the consultant, that there is a slight risk of miscarriage following the amniocentesis test. And one of my worries that I would have the amniocentesis test the baby would be fine but I would miscarry, and I felt that if that had happened I would blame myself because nothing was wrong and that I'd have gone for my peace of mind and I had caused this to happen.

The amniocentesis test is so I still wanted it even though that risk had been explained to me. I felt that that slight chance was a risk that I needed to take.

The test itself, it was uncomfortable and it was slightly painful, it's not the worst pain I've ever had. But, it was explained to me all the way through by the consultant, what he would do, and he encouraged me to, and my husband, to look at the screen. And he said, he was doing that to make sure that we knew that he was performing the test safely and that the baby wasn't being harmed by the needle. And he encouraged us to look at it.

Once he'd done the test, he just told us that it would be sent away, and the results would come back, and he left the room. There was no other explanation. We were basically left to get ourselves together and go home.

She took into account the effect she believed her baby's Down's syndrome would have on her, her...

She took into account the effect she believed her baby's Down's syndrome would have on her, her...

View topic summary
SHOW TEXT VERSION
EMBED CODE
PRINT TRANSCRIPT
I think to be fair to my husband it was more me and what I could cope with. Much as I love my husband and I, and we're a family, at the end of the day I think if you have got a child with a handicap a lot falls on the mother. And I think my main thinking was about myself and how I would cope.

Already having a daughter who wouldn't have been much older, how I would cope if the child was handicapped, physically and mentally, and I also weighed up how it would affect a relationship with my husband and also my daughter.

One worry was, if we proceeded that if anything were to happen to myself or my husband, it falls on my daughter to look after any brother or sister. And I was also worried that having a child with a handicap, mental or physical would mean my daughter would be slightly, not neglected in a physical or emotional way, but slightly pushed out on a day to day basis.

So I, although my, it was mainly my own feelings on the, on the problem, I needed also to take into account my daughter and my husband, and how it would affect our family as a whole rather than just me although my, how it would affect me was a main consideration. My own view personally was that I wouldn't have been able to cope as a mother with a child that was handicapped physically and mentally.

I think I was worried about every element, I was worried about how it would affect me emotionally as a person, whether it would drive me crazy to put it literal. How it would affect us financially I was working because we had to, I had to work at that point. My daughter was in a private day nursery and I didn't know what, if they would have the facility to take on a child with a mental and physical handicap.

And getting day care or respite care is very difficult. So I had to weigh emotions for me, emotions for the family, financially, how it would affect us later on in life financially. It would be nice to move in the years to come, but if we weren't, if I was unable to work then financially it would be a struggle.

She didn't 'gel' with her hospital midwife but found the community midwife helped both her and...

She didn't 'gel' with her hospital midwife but found the community midwife helped both her and...

View topic summary
HIDE TEXT
PRINT TRANSCRIPT
It's hard. Because it, at the time when you knew rather than [laughs] but, talking to somebody like they're a human being rather than just patient number, because that's how it felt for some of it, and in some ways I felt like I was on a conveyor belt 'get her in, get her out'.

But then the midwife who came to the door to tell me the news, she hadn't done it before, this was her first time that she'd ever had to break the news, but she was possibly one of the most wonderful persons for us to deal with, because we sort of gelled with her, and she asked us how we were feeling and she would walk through the door, and she would ask my husband 'How are you?' And she would sometimes ask him before she would ask me.

And we, my husband and I have both said for those first two weeks afterwards she was possibly the only thing that kept us sane, because she was the only person who actually came and spoke to us, and spoke, actually spoke about it as well, and asked us how we were and said to us, 'It's normal not to be feeling yourself, it's normal to have different emotions, it's normal to cry, it's normal to be happy.'


She and her partner decided to get married on the first anniversary of the baby's death so that...

She and her partner decided to get married on the first anniversary of the baby's death so that...

View topic summary
SHOW TEXT VERSION
EMBED CODE
PRINT TRANSCRIPT
The only other thing that my husband and I did is our daughter would be due to be born on the 17th of May, and to this day, the day that we actually had her the 2nd of January, it doesn't, doesn't upset me, it's actually the 17th of May that's more upsetting because that's when it should have been her birthday.

I don't see the 2nd of January as her birthday, I see it as when she should have been due to be born, and in May, that's when I go a little bit quiet, I get a bit low. And at that point we made a decision well instead of having something to be sad about, let's get married and we'll have something to celebrate instead.

And it was actually that year we lost my daughter in January '98 and we got married in the May '98. And at the time it was what we needed, but in hindsight I wished we hadn't. Not that I don't want to be married to by husband! I wish maybe we'd maybe left it another month or so, and left that time as the time where it would have been my daughter. I sometimes feel now I want, I don't want to celebrate my anniversary, I want to celebrate her birthday and so it sort of conflicts you-

But then I know it's always there, it's sort of celebrating her birthday in a different way from our anniversary. It's, and it's silly things that do upset you.

Says that her partner needed as much time off work as she did to recover from the loss of the baby.

Says that her partner needed as much time off work as she did to recover from the loss of the baby.

View topic summary
SHOW TEXT VERSION
EMBED CODE
PRINT TRANSCRIPT
[Name] my husband was very, very upset as well throughout this whole experience, and he actually went to the partner of my doctor who died and asked for a sick note to recover and to spend time with me, at which point the doctor says, 'Well what do you want one for, you've not lost a baby.'

And [name], my husband, for once in his life was very forceful and insisted and said, 'It affects me as much as its affecting my wife.'

And it felt that there were some parts of the medical profession who either didn't read into us enough, didn't care about us enough or just swept us under the carpet. And at that point we changed doctors. It was, he said to me later on down the line, I'd been off for, I think I was off for 6 weeks and the midwife had come to me and said, 'You take as long as you need,' she said, 'You need to recover'.

And so my sick note ran out, and I went back and said, 'I still don't feel ready,' and he says, 'Look, I'm only going to give you another week then you've got to get yourself back together and get to work'.

And it was, he was very angry at the time with a lot of people, and with what had happened with the post-mortem as well. It just felt... it felt like you were being treated, sort of as a failure, that you hadn't got a live pregnancy at the end of it.

And because you've actually, you've made the decision to terminate, maybe at certain points it felt like, 'Well, we don't deserve any sympathy. You've got to just get back to being you again.' Whereas I think if it'd had been a miscarriage or something had have happened spontaneously then I think maybe it would have been slightly different.
Previous Page
Next Page