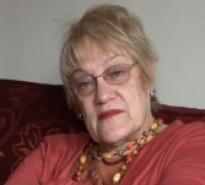 Age at interview: 63
Brief Outline: Beattie had two ECT in 1970 and 1975. She thinks that ECT should be banned and cannot remember a seven-year period after having it. She now takes no medication and lives with her family. Beattie does mental health work and is involved in group advocacy for mental health service users, and will be teaching knitting and crochet in a drop in setting. She is involved with a user group, sits on a committee and interviews panel members.
Background: Beattie has 3 children, 3 cats, is married and describes her ethnic background as White British.

Beattie first experienced symptoms when she was 16 and at school. She says she “went mad”, having been very shy. Beattie was first diagnosed with schizophrenia but later she was given the diagnosis of bipolar affective disorder.

In 1970 Beattie had ECT for the first time. She was depressed and had psychotic symptoms. Having ECT took away seven years of her memory, which she has never recovered. She can’t remember important events like the birth of her son, and says that she feels like an incomplete person because of her substantial memory loss. Beattie can’t remember a lot of the 1960s and had to ask her family about events that had happened to her. For example she didn’t know that she had had a lumbar puncture, and only found this out through reading her medical notes. Because she was under 21 in 1970, she says that her parents had to sign for her to have ECT. In 1975 when she became depressed after the birth of her daughter, she had ECT again. This treatment happened supposedly on a voluntary basis, although she says staff kept “nagging” her to have it. Although she didn't want to have ECT, she says that she was so depressed she just wanted to “go to sleep”, as she hoped she wouldn’t wake up. Beattie didn’t see her daughter until she was six weeks old. Although she only had ECT in 1970s, she has been held under a section of the Mental Health Act on other occasions. In 1990, 1999, 2001, 2003 she has been admitted to hospital.

Beattie strongly disagrees with people having ECT and compares it to other outdated psychiatric treatments that used to be carried out, such as lobotomies. She felt heavily medicated on every admission and found this highly unpleasant. She enjoyed some of the interesting thoughts and experiences that she had had and didn’t want to take the drugs as they took them away. When she was given Haloperidol, she said that it like her mind was split into ‘two halves’. In the past she has had risperidone, olanzapine, carbamazepine and Largactil (chlorpromazine hydrochloride). The physical and psychological side effects from these drugs have been significant. However Beattie didn't mind taking antidepressants. What Beattie has found most helpful are visits from her CPN and social worker. She did have psychotherapy but she became obsessed with her therapist.

During her time in hospital she was sometimes treated quite badly: she had been sat upon and has had her hand bent back whilst being restrained by staff.

Beattie now works with user groups and thinks that inpatient wards have slightly improved since her first experiences of them. Individual members of staff were kind to her but she feels it is the system that has to change. She met her husband at MIND and they had a daughter together. Beattie has had people stigmatize her because of her mental health.

Beattie would like to know if she has any lasting brain damage as a result of having ECT and would like an MRI scan. Beattie now sings in a choir, does gardening, reads and looks after her cats.

Beattie felt her psychotic episodes had a spiritual element. When she was high she felt she understood things about life, although she could also insult people or do silly things.

Beattie felt her psychotic episodes had a spiritual element. When she was high she felt she understood things about life, although she could also insult people or do silly things.

View topic summary
SHOW TEXT VERSION
PRINT TRANSCRIPT
Well I suppose I think that when you go high and you have a psychotic episode it’s a spiritual thing as well and they call it spiritual emergence and there’s a thing called a spiritual emergence network, because you have these thoughts, and in fact a woman in Scotland was having a spiritual experience, but they took her into hospital and then she actually sued the health authority and won the case, because psychosis and spiritual emergence are similar. And a lot of it’s to do with reincarnation and the meaning of life etc.

Can I hear some more about your experience?

Yes, I’m a spiritualist as well and I sort of when I went high I sort of sort of understood things about life etc., about why the world is as it is. And a lot of people who are called schizophrenic, they hear voices which could be spirit voices in some cases.

Can you talk me through some of the things you learned through those experiences?

The trouble is I can’t remember unfortunately. I mean I thought I lived during the French Revolution. That’s all.

And how are you feeling when you are on these “highs” or...?

I’m quite, I’m quite happy but no one else is because I don’t stop talking and I insult people and I do silly things, you know.

When Beattie had ECT over thirty years ago, she lost 7 years of her memory, which included the birth of one of her children.

When Beattie had ECT over thirty years ago, she lost 7 years of her memory, which included the birth of one of her children.

View topic summary
SHOW TEXT VERSION
PRINT TRANSCRIPT
And when I, in 1970 they gave me ECT when I was depressed. I had psychotic symptoms. And it actually took away seven years of my memory which never came back. And I don’t remember my son being born, I don’t remember the 1960s and that was in 1970.

And I feel like an incomplete person because of it.

What impact has it had in your life, you were saying the memory loss?

Well it bothers me you know, because there’s no one alive now that I could ask about it really. My parents I can’t ask them they’ve gone. And it’s rotten to not remember the sixties and my son’s birth and everything else.
Previous Page
Next Page