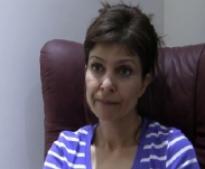 Age at interview: 50
Brief Outline: Alka has been married to her husband for nearly 30 years. 18 Months after getting married her husband had a severe episode of depression and was later diagnosed with bipolar affective disorder. He has been treated with ECT several times and they both consider it one of the only things that help during his worst episodes.
Background: Alka works for the civil service, lives with her husband and describes her ethnic background as Indian.

Alka’s husband, has had Bipolar for 33 years, although she said it took a while for it to be diagnosed. First he was diagnosed with ‘manic depression’. He first had it when he was at university as a medical student and she said ECT was the only thing that would work for him. Her husband didn’t seem to respond to antidepressants, but later was prescribed carbamazepine, a drug first used for epilepsy that was found to also work for bipolar. After first becoming ill early in their marriage, he was well for a period of 18 years whilst taking carbamazepine, but because of developing side effects, he had to change his medication and since 2006 has had a few periods of severe depression.

Alka says that her husband is very sensitive to any changes in his medication and he can go from being completely normal to incredibly depressed within a period of 24 hours. Alka didn’t know much about ECT or how it worked. The first time he had ECT she said it happened ‘behind closed doors’ when he was an inpatient. She didn’t know what ECT was and researched it in the local library: she was quite horrified by what she read. Later she researched it on the internet and finds American sites more useful as they contain more detailed information. Now she takes him for his ECT treatment, interacts with the nurses who are very friendly, and is familiar with the procedure. Alka said that he never responds to just one course of ECT (of around 12 treatments) but needs more. His latest series of treatments that started in June 2012 has included 63 separate sessions of ECT.
Alka thinks that ECT is very humane and works for her husband, although there he has experienced some short-term memory loss. She has tried to help him by creating a diary so he can see what has happened and what will happen – such as an electrician coming or when he is having his ECT treatment. Alka has cared for him over the years and when he was very ill, she pushes him to do daily tasks such as brushing his teeth and having a shower. Alka has appreciated the help she has had from the psychiatrists she has known over the years, but felt the standard of care can vary. She has felt isolated at times and felt that the level of support she receives when she is caring for him at home was pretty low.

Alka said that the dynamic of her marital relationship has changed over time. Her husband has ‘rapid cycling’ meaning he can be depressed and then shortly afterwards can have an elevated mood. She has also negotiated with his work when he is well enough to return to work. Alka has introduced him to the card game Bridge and has found that that helps him think about things other than work.

It is only recently that Alka has had the courage to talk about bipolar and ECT because of the stigma involved. She has found it much easier to talk about a recent physical illness (her husband was diagnosed with mouth cancer) than his mental health. His workplace only sent flowers when he was diagnosed with cancer and not when he was off with depression. Alka doesn’t go to support groups as she feels she is quite pragmatic and just wants to get on with stuff.

Alka explains the process of her husband’s ECT treatment.

Alka explains the process of her husband’s ECT treatment.

View topic summary
SHOW TEXT VERSION
EMBED CODE
PRINT TRANSCRIPT
You have to, because you receive an anaesthetic, you have to be nil by mouth, so after about 7.00 p.m. you’re not allowed to eat or drink anything at all. The centres for ECT have been reduced to nationally now, I gather there’s one in [city name] and one in [city name], and fortunately we live in [city name]. But on the morning or the day of the ECT as an outpatient which is what [husband’s name] was, I would drive him to the ECT suite where he would have an assessment by a nurse so he’d have his blood pressure taken and they’d take him through a series of questions, particularly to check that he hadn’t had anything to eat or drink since the previous evening. They weigh him and in doing so because you go for a course of treatment the nurse actually gets to know the patient as well but I’ll come back to that in a moment.

And then the patient is given an anaesthetic, it’s a short acting anaesthetic and once that anaesthetic has been administered the patient is given electric shock treatment as was known but through electrodes which are attached to the temples. I think they put some sort of gel on the temples and then they put the electrodes and a judgement is made by the consultant, who’s in attendance as to the level of the… is it electricity? The current that’s going to be given. And because they’d got to know [husband’s name] has well as they did they kind of upped his dose a little bit because they knew that he didn’t respond so well to a lesser dose of ECT. Once the ECT has been administered, they’re taken into a recovery room where they’re monitored, the heart is monitored to make sure that obviously they recover fully and well.

Alka’s husband was often disoriented after his ECT treatments. He would not remember having had the treatment or being given something to eat and drink afterwards.

Alka’s husband was often disoriented after his ECT treatments. He would not remember having had the treatment or being given something to eat and drink afterwards.

View topic summary
SHOW TEXT VERSION
EMBED CODE
PRINT TRANSCRIPT
[Husband’s name] was always terribly disorientated after he’d had his treatment to the extent that he didn’t even know that he’d received his treatment. He would be taken into another room where he was given something to eat and drink by the nurses after, after I’d taken him home he would have no recollection at all of having eaten or drunk something. He would always come home and have a sleep for at least two or three hours. And that’s where as I mentioned earlier his short term memory is completely shot to pieces because if you were to ask him what happened in his life during those ECT treatments he would have no recollection of those. But some of his memory would come back if I reminded him of what had happened.

Alka managed her husband’s moods through imposing routines and noticed when he started to become unwell. She said that the dynamic of her and her husband’s relationship had changed completely because of his illness.

Alka managed her husband’s moods through imposing routines and noticed when he started to become unwell. She said that the dynamic of her and her husband’s relationship had changed completely because of his illness.

View topic summary
SHOW TEXT VERSION
EMBED CODE
PRINT TRANSCRIPT
So yes the dynamic of the relationship has changed. In terms of managing it I think that we have contact with the doctors when he’s not very well and obviously we manage the illness but in terms of day to day life that’s down to me. I’m, ensure, I think, and this is a way that I found, found that it works for us is that it’s a very regimented lifestyle, so regular bedtimes, regular activities and if we do have contact with people I try and kind of get [husband’s name] to withdraw before everything gets, he, he can get very excitable because he’s quite a gregarious person anyway but it’s knowing where to draw the line I think, if I were to leave him to it the chances are, you know, he’d kind of go over the top in terms of similar behaviour to that which, which happened, you know, during one of his hyper-manic kind of episodes.
Previous Page
Next Page