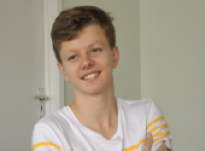 Jamie was diagnosed with anorexia nervosa at 14. Initially receiving counselling through CAMHS (Child and Adolescent Mental Health Service), he struggled to be referred to appropriate adult services. Jamie stresses the importance of raising awareness of men with eating disorders.

Jamie is 19 and in college. He is single and living with his parents. White British.

Jamie says he has had issues with eating since he was a baby. His mum had difficulty weaning him onto solids and later on he used to be a fussy eater, having problems with particular textures of food. In school, Jamie would sell his lunch and at some point started weighing himself regularly. He had no idea at all that something could be wrong until his mum took him to the GP. He was referred to an eating disorder clinic where Jamie received CBT (Cognitive Behavioural Therapy) as an outpatient.
The diagnosis of anorexia nervosa at the age of 14 came as a shock to Jamie. He had no previous knowledge of eating disorders and had no idea also boys could be affected. Transition from child to adult mental health services was difficult for Jamie; he was discharged at 16 but not referred to anywhere else as there were no specialist adult services in his area. He managed to source out counselling himself but he did not find it helpful. He is currently hoping to get a referral to a new outpatient service in his area. Over time, anorexia has affected Jamie’s confidence and body image and he is not always comfortable eating in public. He says he prefers to stay at home and wants to avoid any extra stress that might trigger him. Jamie says he also struggles to trust people, after being bullied at school.
Jamie is now working with Men Get Eating Disorders Too and B-eat to raise awareness of men & eating disorders and he wants to channel his own experiences into something positive. Jamie is in recovery but would be keen to have a bit more support to help with meal plans, for example. Jamie has always found working with animals very therapeutic; he has five cats and does voluntary work at an animal rescue centre. Jamie likes to plan ahead for the future and after finishing his degree, he hopes to find a job working with animals and one day he would like to have family and children.

Jamie had a problematic relationship to food since he was weaned as a baby. Later he would refuse...

Jamie had a problematic relationship to food since he was weaned as a baby. Later he would refuse...

View topic summary
SHOW TEXT VERSION
EMBED CODE
PRINT TRANSCRIPT
Well I’ve sort of had issues with eating ever since I was weaned as a child. Like my Mum weaned me and tried to get me on normal food and I just weren’t having any of that, I just didn’t want it.
I was just like, “No I don’t want that.” And my doctor turned round and said that my Mum was to put food in front of me, if I didn’t eat it was taken away but I wasn’t given anything else. And my Mum went two weeks and I didn’t have anything, and I just did not want it. And my Mum gave in in the end, she was like, “I’m not having my child starve.”
And it wasn’t, I wouldn’t say it was like an eating disorder or something then; it was just like I’ve just always been fussy with food. It was mostly textures like I never used to like chewing things, if I had to chew it too much I didn’t like it. I always liked that soft things to eat, so if my Mum gave me something to chew it was like, “No. Don’t like it.”
But it was never, and I was always just like I’d say like a fussy eater like, I’d like different things. I didn’t like certain foods. It was never, it was never really associated with like weight or anything like that. It was just like I just didn’t like the food.

Jamie broke down when he was told he had anorexia nervosa.

Jamie broke down when he was told he had anorexia nervosa.

View topic summary
SHOW TEXT VERSION
EMBED CODE
PRINT TRANSCRIPT
I didn’t really understand what was really going on. But like I started, when they sort of explained to me I just started crying because I just, I just didn’t realise what I was doing to myself. And to that it makes you realise, I was like, “What? I’m doing that?” I just didn’t, it was just like the realisation of what I was actually doing cos to me it didn’t seem like anything. Oh I’m just selling my lunch. Didn’t really seem like much. But to be put like in the context they put it, I was like, “Oh.” ‘Cos I just didn’t, ‘cos I was only like 14.
And to find something like that is just like a shock. I was like, okay; I just didn’t really understand what was going on. And it’s like sort of a bit of a weird feeling to, thing to understand. It was just like “What?” I was just like, “Uh?” A realisation was just like you just didn’t, I didn’t quite know what to think.
And did they mention eating disorders do you remember, or did they actually give you a diagnosis at that point?
They said there was like, mentioned there was like something wrong like I was having trouble eating and they referred me to, like, not a, sort of like a clinic but not like an in-patient clinic to get like counselling and that, but they didn’t say, they didn’t like say, “Oh yeah, Anorexic.” Or something like that. It waited, I got in the car with my Mum and I turned around and said, “Does that mean I’m anorexic?” And she said, “Yeah.” And I just went and I just lost, I completely broke down ‘cos I just didn’t, putting that name to it sort of like shocked that, and I was like, I just didn’t, that’s just not what I thought I was doing. I just did not put that to what I was doing.

Jamie was happy to stay at home to avoid the stress and anxiety he experienced when going out.

Jamie was happy to stay at home to avoid the stress and anxiety he experienced when going out.

View topic summary
SHOW TEXT VERSION
EMBED CODE
PRINT TRANSCRIPT
I’m just happy to stay at home. I just don’t, like because people will go out with their friends and I just don’t, it’s just like a lot of hassle like to arrange it and stuff like that, I just prefer to sit at home. It’s just so much less stressful and I get stressed like, ‘cos it’s like if you’re sitting in a restaurant and someone’s looking at you and looking what you’re eating, it’s just like, if I’m with a group of friends like my college friends, we went out on like our last day of college and it was just like we just sat there talking, it was just like, ‘cos they know what I’m like, they just, it just was like, it wasn’t really an effect on it.
And it just like I just find, like I will, like sometimes people will like say, “Oh do you want to go out?” And I’ll like make up an excuse ‘cos I just don’t, I just don’t like to. Like I just prefer, I’m just happy, I’ll just sit at home, watch TV in my own little world, just me going out, it’s just, I just don’t, can’t be bothered with the stress.

Jamie felt that people don't understand how eating disorders can affect men. He says the media...

Jamie felt that people don't understand how eating disorders can affect men. He says the media...

View topic summary
HIDE TEXT
PRINT TRANSCRIPT
I find it difficult ‘cos like there are people that don’t even realise, they think, “Oh, eating disorders only affect women. That’s, how it is.” Like I’ve found, I find it quite offensive like there’s been loads of articles and stuff like that like against photo shopping of women’s photos. I’m like, “Yeah but they do it to men to make them muscly and stuff like that. You ain’t gonna stop that, ‘cos like most of the people that complain, quite a lot of them are women. It’s like; they’ll like, “Oh well we want to see that. We want to see scantily clad muscly men in magazines.” I’m like, “Yeah but, that’s like a contradiction, that’s like a double standard for different people,” and I’m like, “You can’t have that.”
Like on a TV programme I watched recently, there was a competition with men in swimming trunks or something, who looked the best one. Like you wouldn’t have women in bikinis would you? No ‘cos that’s just not how they’d do it. They’d say, “Oh that that’s offensive,” or they’d turn round and say, “Oh we’re appealing to a market.” I’m like yeah but, “So what?” You know it’s not right message to give out. It’s just like, I just find it quite frustrating that they think it doesn’t, they don’t think of men with eating disorders as much, they just think, “Oh eating disorders,” they just think a woman.

Jamie never had any information about the impact of an eating disorder on men’s health.

Jamie never had any information about the impact of an eating disorder on men’s health.

View topic summary
SHOW TEXT VERSION
EMBED CODE
PRINT TRANSCRIPT
Have you been given information specifically about men and eating disorders?
No like. I think there’s like a few things, but I’ve never really seen much like, like you hear like the side effects of having an eating disorder on like women. Like they can become infertile and stuff like that but I’ve never seen any for men. So I like went and was like, “Look, well what are they for men? ‘Cos like that I could like have a side effect and I wouldn’t know.”
Like I think, I think I read somewhere that men can become infertile by it, and I’m like, “Yeah but no-one tells you that.” They need to like tell you this could happen, that could happen. Like you can get, I know you can get like osteoporosis which I’ve only seen like written about women, which is obvious it could happen in men as well. So it could lead like some people to think, “Oh there’s no side effects for men.” When there is and it’s just not, I had to like scroll through the whole of the internet trying to find bits of information. Whereas if you try, like side effects for women sort of they all come up and it’s like, “Well why haven’t you done this for men? They need this,” like something this important you need to know.
Previous Page
Next Page