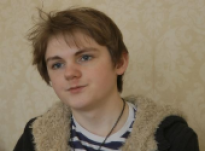 Age at interview: 18
Age at diagnosis: 15
Brief Outline: Ewan experienced bingeing and purging, and later anorexia nervosa, from the age of 14. With his mum's support, and together with CAMHS (Child and Adolescent Mental Health Service), he has overcome the eating disordered mindset and is on way to recovery.
Background: Ewan is 18 and doing his A-levels. He lives at home with his parents. White British.

Ewan says as a child he never had many friends, he used to rely on his parents and he felt larger than most of his peers. He’d always been clever and also sporty but not too bothered about his social life. As he moved to senior school things changed; he took up rugby, made more friends and his confidence grew. However, the pressure at school and peer groups, together with what Ewan calls “teenage angst” altogether got too much and Ewan turned to food for comfort. He started binge eating and purging through excessive exercise. After a while the bingeing turned to restricting food intake and dramatic weight loss.
Ewan says he could only think about his food input and output, everything else became meaningless. He was also severely depressed and had to drop out of school. Ewan was seen at CAMHS and with their help his mum tried to implement ‘the Maudsley method’ at home. Although this helped him put on some weight, his underlying mindset wasn’t addressed. That’s when his mum, together with CAMHS, came up “contract”; a reward method of addressing eating disordered behaviours and mindset and this has made a huge difference to Ewan. Every week he is set certain challenges that he attempts to take and at the end of the week gets assessed and awarded on how he has done. Ewan has been following the contract for well over a year and things that started as challenges have gradually become less and less so. At the moment his challenges are no longer related to what or how he is eating but to do with social life and friendships, to build up his confidence. Ewan has worked with his “brilliant” CAMHS psychiatrist and he has also found help in religion which he says saved him at the worst points of his life.
Ewan is looking forward to starting university, a whole new life phase and making new friends. He has been in touch with his prospective university and they have made a support plan together to enable a smooth transition. Ewan is also keen to do volunteering, to raise awareness of eating disorders, particularly affecting men.

Ewan found comfort in religion. He has searched for God in his own way.

Ewan found comfort in religion. He has searched for God in his own way.

View topic summary
SHOW TEXT VERSION
EMBED CODE
PRINT TRANSCRIPT
When I was going through my worst stage that it I had a religious experience which converted me from atheism to Christianity. ‘Cos I used to be very outspoken against religion and
Really?
And I used to upset a lot of people about that. And since then it’s mainly been trying pursue I don’t know if you’ve heard it’s processed thought theology which is that bad things happen in life you have to accept that, but if you, if you try and do good things then they’ll have a knock on effect. It’s like the Buddhist way of thinking but with God in the equation.
But good will breed more good.
And my experience as well it was sort of being an example of that.
Do you actively, do you go to church? Or do you go to meetings?
Yeah I go to my church and youth group and things and although some of some theories are controversial still they go along with me.
And is your family religious? Do you come from that background at all?
My Mum’s family, my Dad’s family is not religious, but my Mum’s was a Methodist family that were kind of forced to be Christian. And she never was a real Christian until about the same time I changed, and that’s when we both kind of being born-again so to speak, as opposed to the established church we’ve more branched out to searching for God in our own way.

Ewan’s mum used the “contract method” with the help of the doctors. He was set weekly challenges...

Ewan’s mum used the “contract method” with the help of the doctors. He was set weekly challenges...

View topic summary
SHOW TEXT VERSION
EMBED CODE
PRINT TRANSCRIPT
And then you came up with this different method, trying this contract thing. So how, who came up with it, did your Mum come across that ‘cos she did research or …?
My Mum came up, came upon it, a similar thing on this American website it was their version of Beat, I can’t remember what it’s called now.
And she thought she’d, she’d discuss it with my psychiatrist and we talked about it and we did try it but it didn’t work at first because even though we were all, though we’d agreed to trust each other, my Mum still had quite a lot of angst over what I’d done in the past so she found it very hard to trust me. And then one evening we had an argument but this time my Dad kind of saw sense with me and realised that I could be trusted. And that, it was after then that it started to change properly.
So it required mutual trust to work? So you talked about the challenges, how did it like work just in practice?
At the end of each week my Mum would go through the week with a piece of paper and we’d put down tallies for the challenges that I’d done,
And I would be honest and tell her what I’d found challenging during that week. And it pretty much, you could tell by the honesty because otherwise I’d get to the next CAMHS session and lose weight as opposed to put on weight. And it did go up and down the weigh, but it was going up and down as opposed to down. So that’s how we dealt with the trust, and my Mum finally agreed that I wasn’t lying to her.
And I think as I did things as a challenge more and more they became less and less of a challenge until they didn’t become a challenge at all. And it’s still going on that contract. But now it’s down to like very, very small things that I find challenging now. And it’s mainly challenges like used to be having certain foods, but now it’s more doing certain things like going out with my friends, and making an effort to go out with friends and stuff.
And what were the first challenges like?
They were hard to do but I always knew that I was getting something out of it, and it was probably going to make me better as well. And it was more an attitude of I’ll give it a shot rather than I can’t, I’m not doing that.
So was it mainly about eating a certain amount or certain types of foods? Was it those sort of challenges?
Yeah it was sort of, types of food where you’ve eaten it, how, who you’ve eaten it with. Cos going out for a meal was a big challenge. Some challenges were worth more like staying the full day at school would have been like 2 points as opposed to 1 point which was half a day. And no points for not going at all.
And yeah it was social things, food things and exercise related things like if I said that I had some weights today but I didn’t do as many as I usually do ‘cos I was actually tired then I’d get a point for being honest that I didn’t do all my weights ‘cos I was tired.

Ewan was diagnosed with anorexia nervosa at 17 but thinks he had EDNOS a few years before.

Ewan was diagnosed with anorexia nervosa at 17 but thinks he had EDNOS a few years before.

View topic summary
SHOW TEXT VERSION
EMBED CODE
PRINT TRANSCRIPT
I was putting a lot of stress into each day having to achieve this confidence and a lot of stress to be better than my peers and stuff.
So it [school] was quite competitive?
Mm. Yeah.
And so you felt like you made a conscious effort, you know every day to you know make it happen?
Mm. And it’s in foresight that I see it that, at the time I thought it was just, just life. But then I, afterwards when I realised other people weren’t doing that, that it was actually a problem.
Yeah. How did you realise that, “Oh actually, not everybody’s doing this?”
Well it was after my treatment and everything with a psychiatrist, yeah.
Yeah.
‘Cos even though I’ve only had anorexia for about 2 years I’ve probably had that EDNOS you know, strange behaviour with eating probably since I was 14.
And how did that sort of first start manifesting, the strange behaviours?
It was probably when, in year 10 when I got quite depressed and trying to keep up with every day and I got fed up of it, so I sort of swung from being really high to really low. From eating loads to eating nothing. And that’s when it started to kick off really and I didn’t know what was a middle ground.

Ewan will move into adult services as he moves to university in a different town. He has already...

Ewan will move into adult services as he moves to university in a different town. He has already...

View topic summary
SHOW TEXT VERSION
EMBED CODE
PRINT TRANSCRIPT
The phase between moving on from CAMHS to adult services - how is that taking place? You know is there something already changing?
Yeah there’s something in place but it’s more around, centred around as a safety net as opposed to a compulsory thing now. So when I’m at university and, if I’m struggling I can go there and they’ll, there will be someone there to talk to me.
And how do you feel about the change?
I’m looking forward to the change in lifestyle by going to university. And having a different life and knowing different people. But I don’t, am sort of feeling a bit of anticipation about the actual services because the CAMHS psychiatrist I’ve had has been so good so, it’s going to be very hard to find someone to live up to her standard.
And do you plan to apply to the university here or somewhere else?
I have done, but it’s mainly a backup choice. I’m hopefully going to do history. We’ve talked to University about back up support and things like that.
Really. Okay.
And they are very supportive about it.
Previous Page
Next Page