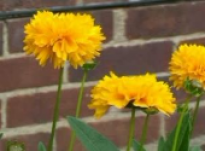 Age at interview: 22
Age at diagnosis: 16
Brief Outline: Charlotte started restricting the food she ate when she was 14. Later she started binging and purging and she avoids social occasions involving food. Charlotte finds volunteering very rewarding, and is an ambassador for Young Minds and Beat (Beating Eating Disorders).
Background: Charlotte is 22 and a part-time student. She also volunteers with a local learning disabilities group. White British.

Charlotte was 14 when she started restricting food at school - to fit in with her friends. She started to eat less at home too and, to avoid confrontation, became secretive about her eating. Charlotte also started self-harming. She describes herself as a perfectionist who was working very hard at school to deal with dyslexia. Charlotte was diagnosed with ME (Myalgic Encephalopathy) in her early teens but has been symptom free for a few years now.
Charlotte’s mum became very concerned about her weight loss and took her to the GP. The GP referred Charlotte to an eating disorder service, but whilst she was waiting for an appointment things came to a head and Charlotte took an overdose. She remembers feeling that some of the doctors were not understanding of what had happened and she felt as if she was being ‘passed around’ within the health service. Charlotte spent four months in a private treatment unit but later returned to NHS treatment. She found the NHS treatment more helpful as there seemed to be a wider range of expertise. When she was 18, Charlotte was diagnosed with Borderline Personality Disorder.
Charlotte has had both CBT (Cognitive Behavioural Therapy) and DBT (Dialectical Behaviour Therapy) and found DBT particularly helpful. She explains DBT to work on a hierarchy of harmful behaviours and includes strategies for coping with certain thoughts and actions. It is also more intensive and often spans over a longer period than CBT. She also tried hypnotherapy which she found helpful.
Charlotte describes eating in public and in front of other people difficult. She has also binged and purged, and still moves between restricting, and binging and purging. She avoids social events which involve food, but feels more relaxed and able to eat in front of her family. Charlotte says she would like for her life not to be restricted by food. She finds voluntary work very rewarding, and is involved with Young Minds and B-eat. She has found the B-eat website and forums both positive and helpful. Charlotte and her Mum have both used the B-eat helplines and think they are a great source of support.
Charlotte advises people who feel they are not well to tell somebody about their feelings, and for worried family or friends to speak to the person they are concerned about. She reminds people that there are physical and psychological aspects to eating disorders, and urges medical professionals to see beyond just someone’s size when assessing whether they have an eating disorder.

Charlotte compares the care she received between an NHS and a private clinic.

Charlotte compares the care she received between an NHS and a private clinic.

View topic summary
SHOW TEXT VERSION
EMBED CODE
PRINT TRANSCRIPT
Looking back, I mean I’ve discussed this with my Mum quite a few times, and looking back I wish that we had stuck with the NHS.
Because, we thought we were making the best decision that we could at the time, but from my experience with the NHS and kind of private, the unit that I went into was quite a new unit, and they didn’t really have any kind of procedures up and running, and also there was, there was an issue with funding after I’d been there for five months, that the health insurance weren’t going to give any more money, and so, and that made me feel awful ‘cos it made me feel like, they only wanted me for their money, and no-one cared about me, and it actually made my mental health deteriorate quite a lot.
‘Cos I like, even though I know that it it’s professionals can’t become too attached to people, it, I do like to think that they care about me and to think that they only were kind of caring for me because it was their job, and because of money, and now they weren’t getting that they didn’t want anything to do with me, was really quite upsetting, and I think also with the NHS all the people that I’ve seen there, all the NHS hospitals I’ve been in have, they’ve had quite a lot of experience in more, I don’t want to use the term severe but that’s kind of what I mean, because people who get help there are usually people that have, are quite seriously ill, whereas in private services it’s maybe less kind of extreme cases that they get and so maybe the experience is there with the NHS. Having said that, I do know people who have found private services better because in the NHS they weren’t getting any treatment so, yeah, but for me that’s how I felt.

Charlotte describes 'ice-diving' which has helped her with the urge to binge or self-harm.

Charlotte describes 'ice-diving' which has helped her with the urge to binge or self-harm.

There’s one particular skill in DBT which is called “Ice Diving,” which is when you’re very distressed, putting your face into a sink or a bowl of water with ice in, and you put your head in it. So it’s a bit like holding ice, but apparently the follicles on your face are meant to be more sensitive and it just gives you that real kind of shock and blast that I would either get from self-harming or binging. And that has worked for me on a few occasions. I guess it just, you have to get in there quite quickly to kind of prepare a bowl of water with ice in, and I think there’s also a couple of breathing exercises that work for me when I’m distressed, but I don’t know what the magic answer is. I don’t think there is one.

Charlotte kept cancelling appointments with the school counsellor because she thought she’d just...

Charlotte kept cancelling appointments with the school counsellor because she thought she’d just...

View topic summary
SHOW TEXT VERSION
EMBED CODE
PRINT TRANSCRIPT
I was eating a lot less at home and I was storing food in my wardrobe, and I’d put it all in a bin liner, and then it made me really satisfied at the end of the week to kind of feel how heavy the bin liner was and think I hadn’t eaten all of that. And my Mum was getting really concerned, and so she took me to see my GP and told them that I hadn’t been eating.
At the kind of the same time I had, I went to see the college counsellor, I’d actually made about four appointments with him but I kept chickening out, ‘cos I didn’t think it, like the situation was serious enough for me to warrant counselling and I thought he would just kind of laugh at me and turn me away.
And so going back to my GP, I went to see her, and she referred me to the local eating disorder service. I also told her that, about the other issues that I was having, aside from food, like with the self-harming I was beginning to feel suicidal as well. But she thought it would be wise to go to the eating disorder service as the kind of initial point of contact. So it took about, it took a few months actually, quite a few, it took about four months to, for the appointment to actually come around, which was just awful waiting for that point, ‘cos in that time I thought, I felt really embarrassed about having to go to an eating disorders unit, and I thought that I had to lose a lot more weight or else I’d go there and they would just laugh at me.

View topic summary
SHOW TEXT VERSION
EMBED CODE
PRINT TRANSCRIPT
I’ve tried bits of CBT, I’ve never been on an official programme but when for example I’ve been in hospital or when I’ve been with the Crisis team, they’ve kind of done bits of CBT with me. I guess DBT is more intense, it comprises of both group and individual therapy and it lasts a lot longer than CBT, it also covers things in more detail, and I think they chose that because it was, the kind of the behaviours and the symptoms that I was showing just kind of best fitted the DBT rather than the CBT.
There’s, I think a major difference is that they emphasise, the emphasis in DBT is also a balance between change and acceptance, whereas sometimes the CBT and they’re kind of the professionals that kind of going on at you to keep changing and adapting, it can be quite invalidating to how you’re feeling, whereas with the DBT it’s kind of accepting that this is the way things are at the moment, but that things can also change.
And what’s your experience with DBT? How do you feel it works for you?
I think it really helped me when I was doing it, when I was on the course of therapy. When I finished and I went to university that was quite a lot of changes that were happening in my life and it made it a lot harder to keep using the skills and things that I had learnt, but certainly whilst I was in therapy, and also for a short time afterwards it did kind of reduce certain harmful behaviours ‘cos you have to keep a diary card, a weekly diary card of your emotions and kind of certain behaviours. And those did kind of reduce and the emotions became more balanced. Yeah.
And I managed to achieve things that, you know even the simple things like sending back your coffee if it’s not what you ordered for, I would never had the kind of the guts to do that before but DBT kind of gave me the ability to be able to ask for things like that.
Is that to do with confidence do you think?
Yeah. It’s also, kind of they teach you how to ask for things and the way to go about asking for things, and it kind of gave me, I kind of thought, well I’ll try this once and see how it goes, so it’s kind of like a little experiment and then when I did it and things didn’t turn out awfully and it wasn’t a disaster, it kind of gave me the confidence to do that again.
Previous Page
Next Page