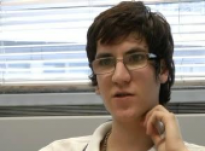 Age at interview: 19
Age at diagnosis: 18
Brief Outline: Andrew has experienced both anorexia nervosa and bulimia nervosa since he was about 17. Counselling, moving away from home to his own place and having a supportive girlfriend have all helped him through to a better place for recovery.
Background: Andrew is 19 and at college. He is in a relationship and lives in a shared house. White Scottish.

Andrew was about 17 when he started involuntarily bringing up food every time after he ate. He went to see a gastroenterologist who thought it might be an anatomical problem that could be fixed with surgery. Andrew underwent a battery of tests, all showing up as negative. The tests span over nearly a year during which time Andrew lost a lot of weight. Also during this time Andrew started seeing the weight loss as a positive thing, rather than as a worry like he initially had. He started obsessing about exercise, calorie-counting and actively wanting to lose weight. Andrew was also binging and purging at this point. Because all the tests came back negative, the doctor discharged Andrew, telling him it was “in his head” but did not refer him elsewhere.
Feeling very angered and depressed, Andrew tried to cope on his own. He had a strained relationship with his dad and being at home wasn’t easy. There was tension around meal times and Andrew didn’t want to join others for meals. Andrew was feeling increasingly depressed, he was self-harming and attempted suicide – at this point he was taken to hospital and referred to an eating disorders clinic. He was diagnosed with an eating disorder, as well as with clinical depression and bi-polar disorder.
Turning his life around was hard; Andrew describes how “every minute was a battle” and that his fear of food and eating was “primeval”. Very gradually he started gained a little more weight and “came more in favour of staying alive than dying”. In counselling he realised that he had never felt able to express his emotions freely and being sick was his way of dealing with emotions. Andrew decided to move away from home which made a huge difference to his life very quickly. He also has a very supportive girlfriend who has “got him through” all the tough times. Andrew also says the staff in the unit were incredibly supportive and there whenever he needed them. They also “re-educated” him in how to learn to eat normally again.
Andrew is a drummer and Scottish Ceilidh music is a big part of his life. He is involved in different orchestras and bands and has been touring abroad. He is just about to start a Social Science course at university. Andrew feels there is a societal stigma attached to men’s eating disorders, and very little information available that is specific and helpful to men going through anorexia or bulimia.

Show in context
SHOW TEXT VERSION
PRINT TRANSCRIPT
It was about August 2009 after I was eating food was coming back up, but I wasn’t making it. It was like as if it was coming back up, there was no retching or anything like that. I wasn’t putting my fingers down my throat, and it just started coming up. So obviously you know that’s not normal, so I went to the doctor and they started organising different tests for me, endoscopies, PH checkers to make sure everything was okay. But all this was taking months and months, and as it was going I was losing more and more weight and I was throwing up more, because I was trying to eat more to not lose weight. And after about ten months I’d lost about three stone so I’d gone down to about 7 stone and by that time it had gone from being you know something that was bothering me to my mind had changed to or you know this is good.
I started becoming obsessed with exercising, exercising all the time, obsessing over food. You know calorie counting. And all the tests came back negative and they basically said you know, there is nothing physically wrong with you. And that’s when I started to you know he said but this just something you’ve got to tell your brain to stop doing this. That’s what, that’s what the doctor told me to do.
By this time I was fuming. I was just an angry obsessed being basically. Hated everything. Angry at everyone. And I’d started doing a sports course at college, which I couldn’t, I shouldn’t have physically been doing because you know I was so hungry I couldn’t eat sleep half the time. But I was writing in that I was eating about 700 calories a day, and I was burning off probably about one and a half thousand calories a day through exercise, , and that doesn’t include like brain function calorie burning or anything like that. Just pure exercise. So I was getting lower and lower and I was so down like just wanted my life to end.

Andrew’s behaviour had traits of anorexia nervosa and bulimia nervosa. He was also clinically...

Show in context
SHOW TEXT VERSION
PRINT TRANSCRIPT
And they basically were saying well it’s all psychological, the throwing up of food, you know it’s your brain telling you to do this. I suppose I went there for a while, didn’t really seem to be helping at all. I was getting more and more down, not really putting on the weight. Didn’t feel it was helping ‘cos basically I was just getting told that it was just in my head, and you need to overcome this. It’s easy. It was easy for you to sit there and say that to me but quite a bit harder in practice.
So this time last year I pretty much to the day I was diagnosed with an eating disorder but they couldn’t set it as one, because you know I was anorexic, I was obsessed with food, not eating. I was also bulimic because I was throwing up whatever I ate. And the psychotherapist diagnosed me with clinical depression and bi-polar disorder.

Andrew’s exercising, self-harm and suicidal thoughts spiralled out of control. He was relieved to...

Show in context
SHOW TEXT VERSION
PRINT TRANSCRIPT
‘Cos there was another two weeks after that where my life went, well it didn’t go downhill but it just dropped off the edge. I wasn’t talking to anyone, I was just angry all the time, exercising more, cut myself off, and then the suicidal thoughts started coming in. And I hurt myself quite a, in quite a few different ways, and I eventually tried to kill myself. Whereas quite possibly if he’d referred me to even a psychiatric nurse I’m pretty certain they could have gone like that [clicks fingers], and this is what’s wrong.
And what about the diagnosis of the bi-polar and the depression? Do you remember did they kind of felt relevant to you or?
Yeah. I think I was actually pleased at getting diagnosed with them because then it was like, thank God, you know this isn’t just how it is to be alive; this is something that’s wrong. It can potentially be fixed kind of thing. ‘Cos I just, I just hated life ‘cos I didn’t feel anything. It was just emptiness, not wanting to ever do anything, not caring about anything.

Andrew had no doubt that it was his girlfriend who got him through the eating disorder.

Show in context
SHOW TEXT VERSION
PRINT TRANSCRIPT
What about your girlfriend? How involved has she been?
She’s not been involved as in coming to the meetings and things like that, but she knows me better than anyone else, she was my best friend first basically so she knows everything about me, she’s been really supportive. Got me through it basically I would say. No doubt in my mind. ‘Cos if I didn’t have that one thing that did manage to make me happy in life, I’d go and get to see her even for a hour day, gave me the training, going to see her then I don’t think I could have done, I don’t think I would have seen any point to keep living basically.
In what way, ways do you think that she has been so supportive or helpful or is it even possible to?
‘Cos I could just talk to her about anything. We can say, we can have a laugh and it’s just, I don’t understand it but just being around her I am a happier person. And I’m a more relaxed person, you know I’m not tense or worrying about this or that. I’m just happier and relaxed.
Previous Page
Next Page