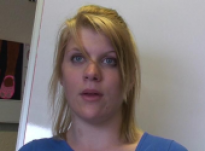 Age at interview: 19
Brief Outline: Steph lived in a supervised shared house with other teenagers who would go out to drink a lot and smoke cannabis a lot. Getting pregnant at seventeen made her more responsible, and so she didn't continue down the road of drink and drugs.
Background: Steph has a four-year-old daughter and has another baby on the way. She lives with her partner. Her mother had a heroin addiction, and Steph was adopted by someone who became an alcoholic. Ethnic background: White British

Steph and her brothers and sisters lived with their mother who was addicted to heroin. They were put into care, and at about age nine she was adopted. Her adopted mother became an alcoholic. Steph experienced four or five years of her adoptive mother drinking heavily and blaming Steph for it, just as she had been blamed for her mother’s drug use.

She says that her childhood was ruined. The day-to-day blame ruined her self confidence. She developed a form of obsessive compulsive disorder; cleaning and checking doors. She stayed in all the time after school and closed herself off from everybody. She eventually told her social worker everything, and, at fifteen, went to live with her maternal grandmother. Then Social Services placed her in shared accommodation with other teenagers. The house was supervised, though the teenagers could generally do what they wanted. They tended to drink a lot and smoke cannabis.
Steph thought that members of the group wanted to 'fit in' thought they could do this by drinking heavily and smoking cannabis. Because of her background, she didn’t believe in heavy drinking or hard drugs, and always felt in control when out with the group. When she fell pregnant at seventeen, she didn’t want to drink or smoke for fear of harming her baby. She thinks that being pregnant made her more responsible and kept her away from drink and drugs.
She is aware of the impact drink and drugs could have on others, so has always stayed sober to help others who weren’t in control. She has a four-year-old daughter, is pregnant with her second child and lives with her partner.

Steph was put into care because her mum was addicted to heroin. She says that young people in care often see drugs as a way out of problems, but she would never do heroin.

Steph was put into care because her mum was addicted to heroin. She says that young people in care often see drugs as a way out of problems, but she would never do heroin.

View topic summary
SHOW TEXT VERSION
EMBED CODE
PRINT TRANSCRIPT
Alright basically from a young age my mother was a heroin addict. And I think I basically lived in that home for six years with her being a user, a needle user also had the brothers and sisters. And obviously saw the debt of that and saw the way it can also ruin people’s lives and basically how obviously it can change a person. And so obviously didn’t get the best upbringing because of that. Ended up being put in care
And from that I lived in, fast track again, but I lived in a shared housing and that on a day-to-day basis was just teenagers drinking and I did get involved in all that and it was a day-to-day basis but it was just seen at the time as a teenage thing to do, to go out and drink with your mates and things like that. But I don’t think, like I never, but obviously I’ve never looked back and seen that I was actually in need of it every single day and things like that but you just find it as  sort of a depressant to sort of make you think the situation is not the situation itself but I don’t think I could ever, even at nineteen years old I could never turn to that as a way out because it’s not a way out and it’s highly addictive, highly expensive and it does ruin lives. And sort of you do obviously put people at second best when you choose to let that addiction take over really.
But generally from a lot of people in care and things like that, you know, they do obviously see alcohol and drugs as the way out because that’s what they’ve been brought up around and they’ve seen that. And I think that’s why it’s a very vicious circle to sort of put that on, basically drink to sort of override that problem and it sort of, you know, even a sort of nasty circle that goes around and round and round really.

Steph counts the cost of her mothers heroin addiction on her finances, criminal record, ruined...

Steph counts the cost of her mothers heroin addiction on her finances, criminal record, ruined...

View topic summary
SHOW TEXT VERSION
EMBED CODE
PRINT TRANSCRIPT
How old were you?
So. I think I was probably about seven when I noticed it like day-to-day basis. Saw my mum actually I don’t know what the word is but prostituting herself a couple of occasions for this addiction. And it’s very powerful and as a teenager now there’s a place where I used to go called the Jesus Army and that place can, a few people there can be heroin, I mean drug users or alcohol use and things like that. And you still see it day-to-day now like people using the stuff and how it can deteriorate their lives no matter what they’ve got as an addiction.
And it’s obviously very sad that they can, you know, like waste their life away because my mum’s now 37 and she has wasted a good 17, 18 years on this addiction. Spent so much money and robbed her family, took loans out in her family’s names, lost us children. She’s got six in total and we’ve all been put in care and things, you know what I mean.
So it’s, I mean it’s not a very, obviously no way near a nice addiction. It’s very powerful and overtaking and it pretty much is one fix and then you’re addicted. And everybody else sort of gets left behind and their addiction comes first which is obviously very hard as her daughter or as any family member would see because you’re sort of second best to that addiction.

Steph thinks there would be real 'shock value' if someone like her mother went into a school and told the story of losing everything to heroin addiction.

Steph thinks there would be real 'shock value' if someone like her mother went into a school and told the story of losing everything to heroin addiction.

View topic summary
SHOW TEXT VERSION
EMBED CODE
PRINT TRANSCRIPT
There needs to be more of a shock value. Maybe real life stories of people actually going in there, you know. For example I think I’d be scared if my mum had actually come in to my classroom at 37, not me personally but obviously went into a classroom at 37 and said, ‘Look I’ve lost 6 children. I’m highly addicted to heroin over the years.’ And obviously can’t calculate how much she’s actually put on that addiction, you know. And it might, you know I’m not saying obviously to try that at school but you definitely might try some drugs and then, you know, because there’s different forms of where you can take heroin and things like that but maybe they would go on to that or maybe they’ve seen it around them and not wondered or thought, you know, ‘Oh come on it’s cool’ and things like that and it’s really not. I reckon if people were to go into a school or even 6th Form at that age and things like that really, obviously youth clubs and, you know to get the real shock value of actually someone saying, ‘Look I’ve got nothing to show for my age at 37’. You know that would be a real shock value rather than so much. I’d say that would probably in my opinion, get more across than somebody giving out a leaflet saying, ‘Three units a day’ and things like that sort of thing to a young person.

Steph explains why people are vulnerable when they are when drunk.

Steph explains why people are vulnerable when they are when drunk.

View topic summary
SHOW TEXT VERSION
EMBED CODE
PRINT TRANSCRIPT
I could obviously be the opposite and go out and have a good weekend and get absolutely bladdered at a club and things like that. But it’s, obviously you’re intoxicating your body and you’re changing who you are from that and sometimes it’s not always a nice character. And you know you’re sort of putting yourself in danger, putting yourself at risk when you’re not 100% yourself and you’re out and about and you’re not at home, you are in a park or things like that and, you know, rape or anything. And for young girls especially that you are putting yourself at risk because there might be somebody there who’s going to make you vulnerable because you are drunk. So definitely it’s not all about the popularity of drinking and going to a park. I’m not saying obviously go to some park and play football and it is easy to sort of sit with your friends and drink and things like that but just remember like what you’re going to do, the fact that you are obviously at risk with the amount you actually drink.

Steph is scared of drugs because of her mother’s heroin addiction.

Steph is scared of drugs because of her mother’s heroin addiction.

View topic summary
SHOW TEXT VERSION
EMBED CODE
PRINT TRANSCRIPT
My, yeah my upbringing has definitely changed my opinion because I know a lot of teenagers. I don’t envy them but a lot of teenagers that can have that careless thing of drinking and maybe taking drugs which I’ll never have. I’ll never understand why they have the carelessness of that because I’ve seen on the news about a girl that took cocaine and within an hour was dead and things like that. So I never see the carelessness of the drug use but the carelessness of alcohol I’ll never have because of my upbringing and because in my mind psychologically I see it more of an, obviously day-to-day I see it more of an addiction than just a one time thing and I sort of, I think I’d scare myself into thinking that it wouldn’t just be that one time and I’d want to do it again and again and again sort of thing. So I sort of stop myself in case I get addicted which I probably won’t but, you know, I don’t know how to put it really. It’s kind of like a psychological thing where I think in my brain I could become addicted to this so I don’t do it. But so it’s basically why I don’t really drink over the amount and things like that because I’m sort of scared of seeing my upbringing and my life that has been that it could be potentially an addiction. And sort of I don’t know, I want, [ha] I suppose I once heard as well that it can be like, is it the word hereditary where it’s in your family things like that. But or an escape route really I’d say sort of could be seen as that like where I see my situation and I could have seen my situation with that I’m in at the minute or there was when I had my daughter and things like that with no family around and everything like that as an escape route.
Previous Page
Next Page