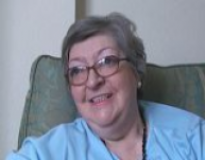 Susan's type 2 diabetes was diagnosed within the past 2 years. She was initially put on metformin by her GP, but this gave her violent diarrhoea. She is now on rosiglitazone, 4mg twice a day which suits her much better. She checks her sugar in the morning and finds the medication easy to use.

Susan was never fond of sweet things, so cutting them out of her diet was not difficult. More recently, Susan has had investigations and treatment due to bowel problems and this has made her feel tired and less able to go about her usual life. She feels that the medication, and her anaemia has reduced her appetite, and she worries that not eating properly is not good for her diabetes either. But the treatment will be over soon, and hopefully she will be able to get back to her daily routines.

She has two small grandsons who come to stay with her at the weekends and she loves looking after them.

SHOW TEXT VERSION
PRINT TRANSCRIPT
Well, be sensible, eat properly. If you're going on tablets, I know metformin is a normal tablet, but I couldn't tolerate it, but there are other things that you can have. I didn't realise this when I took the metformin. And it wasn't until I spoke to a guy at work who has diabetes and he said, "Sue, there are other things you can have. You don't have to have that one." So that's when I talked to my doctor and said, "I think I need something else." I put up with it for about six to eight weeks but it was getting, I mean when you've got to get up at 5 in the morning to go to the toilet and, if a tablet's upsetting you...

So then the doctor put me on something called 'rosa-something' [rosiglitazone]. And I've been fine ever since and my blood sugars have been brilliant.