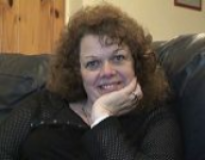 Age at interview: 50
Age at diagnosis: 44
Brief Outline: Diagnosed 6 years ago. Sallie tried to control it with diet and exercise but has recently started metformin.
Background: Sallie is a wife and mother with 3 grown up children. Ethnic background/Nationality: White British.

Sallie was diagnosed 6 years ago at a very difficult period in her life. Her mother and her brother were seriously ill and she took responsibility for providing care and support for them both. Compared to what they were going through she says, her diabetes seemed irrelevant and 'not a real illness'.

Sallie said she didn't want to face up to having diabetes and pretended she was trying to change her diet when really she was eating wrong kind of food and comfort eating - chocolate especially. Two weeks before the interview she realised she had become quite ill and went to her GP and diabetes nurse. She was prescribed metformin and now feels a lot better. Her main form of exercise is walking her two dogs everyday.

Sallie enjoys her family and her social life to the full. She says that she can be moody and finds that if she's told not to something it usually makes her even more determined to do it. She says her husband understands her very well and has always given her wonderful support. She says her medical team are brilliant and have been there for her '110%'.

Sallie has lost weight on her new diet but doesn't enjoy it much and still has cravings for...

Sallie has lost weight on her new diet but doesn't enjoy it much and still has cravings for...

View topic summary
SHOW TEXT VERSION
PRINT TRANSCRIPT
My diet changed now... My gosh, big, big time. I am not eating anything that has got flour in it. No fat. And no chocolate.

So what are you eating?

I am not eating anything I like at all. It's all absolutely bloody disgusting (sorry I swore).

What kind of things' What is the most disgusting meal that you have had to eat that you have prepared for yourself? Give me an example of something?

Really disgusting? Well, I'm having Bran Flakes with banana in which isn't my sort of thing really. And I'll have that for lunch sometimes, because I have had my Rice Krispies for breakfast. But I am trying to do the old fruit and veg thing you know. But like roast without the roast potatoes and Yorkshire pudding, it's not the same really.

Can you not even have one roast potato?

Yeah, most probably. But I think, like it's only been like this for the last two weeks. There's no way I am living like this for the rest of my life. I can't. You know, I have got to have treats now and again.

We went out for a meal on Saturday evening, and I had a starter and a main meal and my youngest son had chocolate fudge cake. And I said, 'Can I have a mouthful please, just one?' And he made such a fuss about giving me this one mouthful, but then his girlfriend gave me a mouthful, but in the meantime I had turned funny big time, I could have come home you know spoilt everybody's night - that's how much it meant, just having this one mouthful - but I knew that if I had had one to myself, I would have, you know, undone all my good work, and it's never worth it. But that one mouthful was very, very nice indeed. I didn't want to swallow it. I just wanted to keep it in my mouth. But apparently all these urges leave you if you stay off it long enough. But having said that, I have got my two tins of Roses [chocolates] all ready for Christmas.

Sallie was dreading being weighed at the clinic but said that the nurse was 'brilliant'.

Sallie was dreading being weighed at the clinic but said that the nurse was 'brilliant'.

View topic summary
SHOW TEXT VERSION
PRINT TRANSCRIPT
Well actually, within the last two weeks, when I went for my check up yesterday, because I am going to a weight clinic now apparently. I call it the fat clinic, but it is the weight clinic. And she asked how I was getting on and I said I was doing really well and feeling a lot better on the medication. She said, 'Do you think you have lost weight?' And I said, 'Well really, if I have it is a bonus, because I'm feeling so better, and the losing weight bit doesn't really matter.' And I have lost 7lb in two weeks. So, obviously what I am doing is working and' I got on the weights and she said how tall are you? I said, '8' 3''' So anyway, I was only 5' 4' which was disappointing. So I've shrunk two inches somewhere. I always used to be 5' 6'.

So do they kind of zap you with science, like talking about your body mass index. I mean do you know about stuff'?

No, no, the nurse I saw yesterday was absolutely brilliant. The first time I'd met her. I was a little bit apprehensive. Late going in. I thought I am going to leg it, I can't go through with it. But I did go in and I was glad, yeah. Then the word obese come up on the computer. And she said, 'I want you ignore that word.' She said, 'It is the most horriblest word ever.' Because it is, you know, like how they describe you isn't it? Like if you are over such and such a weight, but we were laughing about that. But she was alright, very good. Very good.

Sallie has experienced severe mood swings and is grateful that she has such a supportive husband.

Sallie has experienced severe mood swings and is grateful that she has such a supportive husband.

View topic summary
SHOW TEXT VERSION
PRINT TRANSCRIPT
We've been together, I was 15 and he was 17, so we have grown up together and we know each other, and we know where we are thinking. We don't even have to speak because we know what is going through each other's minds and thankfully, you know, like with diabetes you can have big, big mood swings. One minute I can be, you know, quite happy and laughing, the next minute 'boof', but you know, he just tolerates it all, you know, makes fun of it, gives me a cuddle and it's all forgotten. Yeah...

So why do you think it is that you have the mood swings? Is that still happening even though you are on metformin?

No. I've been better. I think the mood swings are because you feel so tired and helpless. You just can't do' Frustration, you can't do what you used to be able to do.