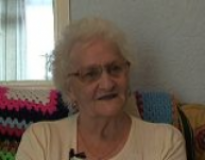 Age at interview: 74
Age at diagnosis: 68
Brief Outline: Rita was diagnosed 6 years ago, and after 6 months was put onto metformin.
Background: Rita is a housewife and mother who is married with two adult children aged 53 and 38. Ethnic background/Nationality: Welsh

Six years ago Rita noticed feeling very thirsty and tired and more irritable than usual. Type 2 diabetes was diagnosed and after 6 months, she was put on metformin.

Rita had seen her sister and her brother live with very severe diabetes. Her brother had sores on his legs and recently died from diabetic complications. Her sister lives near-by and her diabetes has also made her very ill - she is completely house-bound and Rita is concerned about her. Rita feels very lucky in comparison to her siblings, and believes that she has adapted well to her condition.

The most significant change in her health has been losing her appetite. She has lost a lot of weight since being diagnosed with the diabetes, and struggles to eat proper meals. Rita has had a number of different medical conditions over the years, most recently diverticulitis. Rita worried more about having diverticulitis than diabetes and found it impossible to eat or drink anything without it going straight through her. The diverticulitis is stable, and Rita only has occasional 24-hour flare-ups.

Rita is not able to walk much because of trouble with one of her legs but she is active in the house and the garden. She and her husband look after their young grandson which Rita enjoys.

Rita goes to see the diabetes nurse every month for a checkup.

Rita goes to see the diabetes nurse every month for a checkup.

View topic summary
SHOW TEXT VERSION
PRINT TRANSCRIPT
So how often do you see a nurse or a doctor?

Once a month you have to go, and you've got to do your things, you know. I've got all that there. And they're just keeping you in check. And then every I think it's three months or four months they check up on your pills etc, you know. Because you have to take pills that suit your diabetes. It's like cough mixture. You can't buy a cough mixture unless you h-, ask the pharmacist. Because they tend not to give you cough mixture now, the doctors.

They don't come visit, no.

But over there in the surgery?

There, oh, yes, they've got a proper diabetic clinic on that side, and the surgery is this side. Yes, there's two sisters there and there's a little nurse who does your blood and weighs you. And there's two sisters and there's another two nurses in there I think. Yes, there are. You know, they take your blood, take your blood, and then they stick needles in your feet, [laugh] feet, you know, your pressure, is it? is all right.

So how often does that happen?

I don't go very often. Maybe my fault, because I don't feel that ill with it.

But do you have to go every, on a regular basis?

You have to have, your tablets have to be checked up, and to see if you're taking the right tablets etc. And you get all this thing done to you. But other than that I don't go.

But that's, how often is that? Is it three months or six months?

I think, it's about eight weeks I think. I can't remember now. About eight weeks I think. Yes, about that. But they always say, 'If you feel, if you feel ill or anything like that, just ring the doctor and the doctor will make an appointment either with the doctor or with the nurse.' But I, if, if I'm a bit worried over anything, which isn't very often, I will phone the nurse, I'll phone the clinic, not the surgery. Although it's all in the same grounds. I will do that.

Rita says she just clams up when she goes to the GP.

Rita says she just clams up when she goes to the GP.

View topic summary
SHOW TEXT VERSION
PRINT TRANSCRIPT
And do you feel that you are able to ask questions if you have any questions?

No. You go in, you go in and they take blood. I suppose it's me, because I do tend to clam up when I go to the doctor's because I don't like the doctor's at all. Most probably it's an inward thing, you know. But I suppose if I did ask, you know, I would get an answer. I don't know. But like if you had a group, you could all discuss like we are now. Which is easier, isn't it?

I just don't know. I just clam up. I think it's maybe fear of going for surgery. It's the same when I have to go for a hospital appointment. I'm sick for three days [laugh]. I'm terrible. At 74, is that laughable, isn't it [laugh] I can't help it. That's me. I don't like any fuss and bother, you know. But I suppose I could go, no problem, if I wanted to. Well, I'd have to, wouldn't I? You know, if I come up with a problem I would have to air it like, wouldn't I? But I'm, I'm lucky because I say to my daughter, 'Oh, so and so.' 'Oh, yes, Mum, yes. I'll get that sorted out for you.' She'll ring the surgery, you see. Save me going out, all the way up in a taxi and all the way back home. She's quite good like that. Or if I have a new pill, you know, and it's made me a bit, you know, iffy, she'll ring the nurse and, or she'll ask her own sister in work.