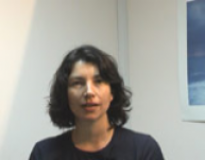 Age at interview: 39
Age at diagnosis: 36
Brief Outline: Has had 3 bouts of depression since 1998 (including a suicide attempt). Main helpful approaches include therapy, Efexor (75mg/day), alternative therapies and writing in a diary.
Background: British/Half Italian health professional, has felt like an outsider from an early age. She was bullied at school and also had a termination at the age of 16. (Played by an actor.)

Stopping Efexor resulted in nausea, depression and panic. (Played by an actor)

Stopping Efexor resulted in nausea, depression and panic. (Played by an actor)

View topic summary
SHOW TEXT VERSION
PRINT TRANSCRIPT
Ooh dear, bad news. Being stupidly pig-headed, just stopped it (Efexor) at 300mg and stopped it and that was the, I thought I was going to go mad.

I was just completely off my head with depression. I was down in a pit of despair and really quite unstable. And I thought, "What you are doing to yourself, [interviewee name]?" So I just, and I got back on it. And the reason why I know those feelings are really bad is because if I' if I forgot to put my prescription in, and I would go about a day to 2 days without it, the symptoms would start. About 48 hours of'. after stopping the tablet, if I missed a dose, and the' and the symptoms were so acute it was very frightening. You feel sick, nausea, the nausea was awful. And just panic, really.

Says it is not wrong to think about suicide. Thinking of suicide - and talking about it to a...

Says it is not wrong to think about suicide. Thinking of suicide - and talking about it to a...

View topic summary
HIDE TEXT
PRINT TRANSCRIPT
It's not bad, if you want to kill yourself. If someone's determined to kill themselves, they will. And all this crying for help and the attitudes I've heard of so many casualty nurses when I used to work as a student, 'Oh it's selfish, it's this, it's that.' Yes, okay, it's selfish. Okay, it's a selfish thought, I want to kill myself, I don't want to go on, it's awful, it's dreadful. So what if it's selfish?

It's not the primary meaning of it?

No. It's not the primary meaning of it. It's the, the meaning of it is that I just, just want to be out of it. I want to be away from this and the only way I can solve my problems at the moment is to be, is to remove myself from them. And I suppose, I suppose if you sit and think about it enough then you'll think about, well, who are you going to leave behind? But I will say, it acts as a comfort for me and it does prevent me'.. and I have got very low at times, but I just think, well okay, yeah you can do it, [interviewee name], but do you really want to do it? Is it actually going to solve any of your problems? It's not going to solve any of them but it's still my comfort. And I have a friend that understands that way of thinking as well because she feels exactly the same. And obviously'.

What's it like to have a friend who understands?

Marvellous, because she knows exactly what it feels like, and I know how she feels about a lot of stuff and she'll just say, 'Well, yeah, I just feel like killing myself at the moment so I just need to ring you up and talk to you about it.'

She gets angry and felt a need to break things, but felt frightened by her level of anger. ...

She gets angry and felt a need to break things, but felt frightened by her level of anger. ...

View topic summary
SHOW TEXT VERSION
PRINT TRANSCRIPT
And it's probably, I just have got a fiery temper. I'll take everything and it will be fine, and then all of a sudden, bang. But... but because I'm an extrovert person in that respect, I'll either scream and shout, or I'll just smash stuff up and I have to be on my own, I can't do it when there's people around [laughing]. So, the other day I just took to throwing some of my china mugs around and which... I didn't really want to do but I just had to do it, you know it just had to happen... because I didn't know where else to put this anger. So if you can control the anger it can propel you, it can make you do things positive, but you have to sit and think about it because if you let go of it, it can be quite nasty. And it frightens me, it used to frighten me at some, at one stage I remember saying that one day this, these bloody kids up the end of the road a while ago were, I don't know, there was a dog and it was chasing a cat and this cat was deaf. I knew the neighbour's cat, it was deaf and I thought, the anger was just so acute.

What was that anger about?

It was just the fact that these bastard kids were allowing this dog to chase this deaf cat and they were laughing at this cat, and I just though, you ignorant waste of skin, these kids.