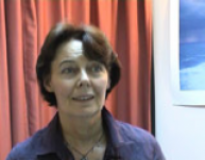 Age at interview: 54
Age at diagnosis: 32
Brief Outline: Has supportive health professionals. She reacted badly to lithium, and is now doing much better on her current medication (currently Quetiapine 200mg/day, Amitriptyline 50mg, Carbamazepine 200mg, Atenolol 25 mg, Raberazole 20mg).
Background: Lives with her husband and children. She has had a difficult childhood and ongoing problems with some family members. She has suffered from depression, paranoia and thoughts of suicide. (Played by an actor.)

Finds that when she needs help, she can rely on her mental health team, including her doctor,...

Finds that when she needs help, she can rely on her mental health team, including her doctor,...

View topic summary
HIDE TEXT
PRINT TRANSCRIPT
And I feel that I'm getting a wee bit more confidence in myself. But it only takes somebody to say a wee thing sometimes and my paranoia takes over. And it's quite frightening'.. It's about trying to control my thoughts right, convince myself, you know, that these things are in my head, that I am not in them.

But when I'm like that, it's reality to me and it's quite scary, it's quite scary. And my friend who... she has stood, she's been with me the last months, because I realised everybody that I helped in life when I'm looking for help, there is nobody there for me, except my doctor and my psychiatrist and my CPN. [laugh] They are there for me but not.... never anybody else' I tell Dr [name] and Dr [name] everything. I don't keep anything. [laugh] And I know that I don't lie about anything.

Though her friends did well on lithium, she became suicidal and very paranoid before she stopped...

Though her friends did well on lithium, she became suicidal and very paranoid before she stopped...

View topic summary
HIDE TEXT
PRINT TRANSCRIPT
The lithium. Oh it just oh, I don't know. They gave me terrible, terrible thoughts. And I do go to self help groups and I do go to the hospital where my psychiatrist sits, and I have got friends whose on lithium. Like they are manic depressives... and that works for them because it's right, a tablet which could work definitely for somebody else.

It could work for one and not work for another. But my friends who are on lithium who are manic depressives, it worked for them. They believed..... but it changed my whole personality terrible. And I've got a lot, a lot of friends and I don't know how I've still got them because it was terrible.

The suicidal thoughts they are away completely. I don't get... you know, but it was horrendous for a year. And I've been down to the underground to try and throw myself on the track.

Along with getting the right balance of medication, says she found talking to God gave her strength.

Along with getting the right balance of medication, says she found talking to God gave her strength.

View topic summary
SHOW TEXT VERSION
PRINT TRANSCRIPT
Although saying like you know never give up that is one thing I've really, really learned. You can nay, there's never, never, for nobody a magic pill. People said that to me for years and years. Ah there is no magic pill you need to just do this and you need to just do that. But I can see that now, there is no magic pill, but I thought I'm no weak. I am strong enough to [laugh]. And I don't go to church, but you see in the last few months I've never spoken with God so much in my life. I said I think this man is giving me the strength to carry on for what I am coming through. I said to him am I going to get peace in life?

Says that people can sometimes take discussions of personal experiences out of context in support...

Says that people can sometimes take discussions of personal experiences out of context in support...

View topic summary
SHOW TEXT VERSION
PRINT TRANSCRIPT
And when I went to the self-help group a lot of the people say that I helped them by just talking in the group. And that's it.  I can't help myself so how could I help them!  But there is a lot of them they are frightened when they hear about medication and I've no....I heard somebody like my friend, she went on the carbamazepine and her hair fell out but I did nay say " [Humph] Oh I'm going to tell the doctor I've got to get off that in case my hair falls out".

And sometimes at a self help group that's what happens. You can never but that.... Sometimes people.... hear you talk about your personal experiences with them, they say they feel like that or whatever but they can nay say, "Oh I'm going to ask the doctor can I get that".

She had felt 'stupid' and 'weak' and that her life was over, but her recent recovery has begun to...

She had felt 'stupid' and 'weak' and that her life was over, but her recent recovery has begun to...

View topic summary
SHOW TEXT VERSION
PRINT TRANSCRIPT
But I've never, never been ashamed of myself. As a wee girl as I said I have realised and I just thought I was weak because I was always told I was stupid, an idiot. She's an idiot, she can't do anything, she's stupid, she's this and she's that. And that is the change in my life. I thought my life was completely finished. I've missed out. But now I feel as if I've got something to offer and meet all sorts on a night out. My pal phoned last night and she said to me, "Would you like to go away for a wee weekend", and I went, "Oh I don't know about that". I said, "Oh I don't know" she said, "Well", no nay think about it, she says alright, "No, wait a couple of months down the line". So now when I come off the phone I went, this was me worrying again, about what she would think about me if I was away with her like..... so I don't know. Maybe I will give it a I try.