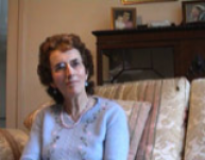 Age at interview: 58
Age at diagnosis: 20
Brief Outline: Multiple severe bouts of depression/ 'euphoria', most recently in 95. Has been hospitalised and had Electroconvulsive Therapy. Most helpful approaches include the drug venlafaxine (75mg/day), music, poetry and spiritual healing.
Background: Was initially a foster child who was adopted, and has felt different and alone since childhood. Feels she has probably had depression since childhood. Now married with one grown son.

Did not like her consultant psychiatrist who did not seem to listen to her complaints about...

Show in context
SHOW TEXT VERSION
PRINT TRANSCRIPT
So and the consultant I had... I really had..... don't think much of at all. I had perhaps about ten or fifteen minutes every week. He would not, he would have about six or seven other people in a circle with him, students, other doctors, a nurse, whatever, my key worker, whatever.

Asking very general questions, and then he'd say something like, "Oh well, continue with the paroxetine." And if I said, "Look, this isn't helping me. I've been on this for eight months, it's not making me better." "It takes time, you have to have patience." You know, "You are better really" I was told by one doctor."You're not depressed, you're just a very sad lady." [laughs].

Psychiatrist. Well, the doctor who said that was doing a six month psychiatric stint, as part of his general practice. But the... the consultant was the one who said, "Oh, you've got to have patience, you know, it takes time, takes time."

I had a slightly cynical view that possibly it was something to do with money and the drug companies and the like. I don't know.

Felt she had to present 'dramatically' in order to get into hospital.

Show in context
SHOW TEXT VERSION
PRINT TRANSCRIPT
And, well, I was quite some weeks ill before I got taken to hospital, because, certainly in 1994, I think it's still the case, it's very difficult to get a hospital bed for quite severe mental illness. You've got to be suicidal.

And were you suicidal?

I was feeling suicidal. I was also quite violent at times. I mean in my own doctor's surgery, I swept all the things off his desk you know. I mean I did realise I was really ill when they called for an ambulance to take me into mental hospital. The same time there was a part of me, kind of watching what I was doing' saying, "Right, well make it really dramatic." I wasn't pretending exactly, but I knew I had to make a song and dance to get heard.

Describes an experience of sexual misconduct by a member of staff at a hospital over 20 years ago.

Show in context
SHOW TEXT VERSION
PRINT TRANSCRIPT
It's amazing that I've forgotten this. When I was in hospital, one of the doctors actually sexually abused me.

Yup. He didn't rape me. And I have to say that I consented. And this was four days after I had thrown myself in the reservoir.

And he was an Indian doctor, I mean a properly qualified psychiatrist who was working at the hospital. I at the point where I was rescued from the reservoir, I was put into an emergency ward, and he was one of the doctors on that ward. And he approached me sexually and I kind of, half-agreed. And then, of course, was told not to tell anybody. And it was obvious from what he told me that he'd had lots of encounters of this kind. So I didn't tell anybody. But looking back, that was my first experience of sex.

At twenty, which in those days wasn't as late as it might be in these days.

You weren't well enough to'?

To know what I was doing. But of course I felt guilty, because I felt that I could have said no. But obviously my own, the own body's own natural desires at twenty are quite strong. So that was my first, and to tell it to explain just how it affected me emotionally, it was a year before I could look an Indian man in the face. I am not a racist person at all, and I don't feel that way now, but it took me a year, every time I saw a male Indian, I would recoil. That was the association with the attack.

Describes how taking a new antidepressant and doing 'Family Tree Healing' helped her to recover...

Show in context
SHOW TEXT VERSION
PRINT TRANSCRIPT
And the actual healing took the form of a Christian liturgy, in the home of a minister of religion, who devoted his time to healing; didn't have a church. Not necessarily just Family Tree Healing, but to healing altogether. But, in this particular form of healing, he put aside one room so it was like a sanctuary. I was kind of aware of the... what the energy must be like there. And he had a table, that was his altar, and you could put anything of significance on the table. So I put my book of poems, I put a letter I had written, offering up, as it were, what I felt needed to be made whole.

And anything else, I can't remember what else, but anything can be put there, a crystal, whatever that was symbolically important. The liturgy itself, because I wasn't actually a church-going Christian, and he knew this and he accepted this, but because they believed in the Christ spirit, you know the deeper meaning of all these outer teachers. That was fine, and the liturgy was able to be altered to suit. You know, I could add or subtract from it to suit. And that... that's one of the things he does do this man, yes, in Derbyshire.

What did it do for you?

Now, the interesting thing is, on the day that I went there, I was feeling not quite so bad, because by this stage I was on a different drug. I'd been on the tricyclics, I'd been on the paroxetine, which was an SSRI.

I was now on one which is in a class of it's own, venlafaxine.

Because it was working on the noradrenaline as well as the serotonin and a- I think that's what of course I'd been needing the whole time. With the adrenaline that was all around my body. That's my theory. So, I was on that but I wasn't fully well just yet. But I was, it was one of my better days. And, I had two friends tuning in at a spiritual level to what I was doing, and other people around the country, probably praying for, thinking of me at the time. And within a very short time, I began to get much better. I had one more severe dip down, for a short time, well, two or three weeks. And then, by the beginning of December, I really was getting better, and didn't look back.

Says that a book by Joan Borysenko with thoughts, prayers and meditations from a range of...

Show in context
SHOW TEXT VERSION
PRINT TRANSCRIPT
And I use a very good little book, it's called 'Pocketful of Miracles' it's just up there, by Joan Borysenko. And yes, that's a very good book actually.

Can I have a look at it?

Do have a look at it. It's published in America, and she uses many different religious traditions including native traditions. I don't know about aboriginal but certainly native American. And she does some Christian as well, and there will be a seed thought for the day. And then there will be prayer/practice. It might just be a prayer or it might just be an invitation to practise one of the meditations, and at the back of the book there are several which are quite simply explained, different ways of meditating. For example, imagining the breath coming from the earth, the energy coming from the earth. Imagining it coming from a higher energy centre, and meeting and becoming stronger in the heart centre.


Explains that prayer worked for her over such a long period of time that it could only be...

Show in context
SHOW TEXT VERSION
PRINT TRANSCRIPT
I mean, even though I didn't feel it (prayer) was doing me any good. And an image I did use, and I've used since to help other people, is of the iceberg in the sun. That although I wasn't aware that any melting was about to take place, or going to take place, of the iceberg of depression. An iceberg will be melting in the sun, and there will come a point when it's obvious and it's visible. And that's what I held on to, that there would come a point when I would begin to feel less depressed.

Understands depression as a 'breakthrough' because it helped her to become less rigid in her...

Show in context
SHOW TEXT VERSION
PRINT TRANSCRIPT
What have I learned? I've learned that the only thing that matters in life is love and peace. That, sort of, strict discipline is not important. It's balance that really matters. I've learnt that a breakdown can also be a breakthrough. I'm one of these people that's obviously had to be broken down in order to grow enough. I'm not saying that everybody needs to do that, they don't, in the severe way I have, but...

So what was the breakthrough..... the rigidity was breaking down?

The rigidity had to be broken down. I mean, after the first depression, my the religious binding, as it were, and I think religious, religion means that which is bound, but that had to be completely.... that was completely knocked out of me. Whether I liked it or not, and of course I felt, that, during that first depression, I was going about saying, "But what happens if there's no life after death?" All the doubts that I'd squashed in my teens were of course coming out now and I had to deal with them. They just hit me in the face. And I thought the end of the world had come. If this wasn't true, supposing it weren't true, life after death, you know.

Thinking about depression as a way of changing her life, rather than as the enemy, helped her...

Show in context
SHOW TEXT VERSION
PRINT TRANSCRIPT
It may be the lesser of the two evils. It may have a protective... Also if somebody is traumatised, I'm thinking of people who in the Second World War for example, who were in prisoner of war camps, they're traumatised, they keep having flashbacks. Maybe a period of depression protects them against unbearable pain. Although the depression itself feels unbearable at times, it may be protecting them from something even worse. That would do more damage. So...

So it can be seen as not the enemy?

As part of the whole story. No, not the enemy, not the enemy. It's not helpful to think of it as an enemy. And it's not helpful for me to think badly of myself because I'm depressed. It seems to me it's ok, in the sense, I am ok, not the whole of me is depressed, a part of me. This depression is a manifestation of a malaise, of a need to become more whole. That's how I look at it. If I am depressed, then I have the opportunity to change. I get to a point, when the depression is not so severe, I get to a point, and only I know when that is, and I know in my bones, when I can choose either to change certain ways I live, attitudes I have, or to go back to the old ways which will probably result in another depression. It's rather like having a dream, which is telling me something. I take no notice so it recurs and recurs until I do.