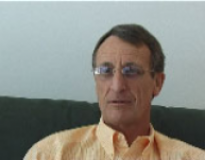 Expresses anger at having developed bowel cancer despite having followed a healthy diet.

Show in context
SHOW TEXT VERSION
PRINT TRANSCRIPT
I looked at my parents they were 80, 81, why should I worry about it? Everyone keeps telling you about your parents and keep eating 5 pieces of fruit and vegetables, I live on fruit and vegetables. I don't need red meat.

If I did eat red meat it was very lean, very small amounts. I'd go for the chicken or the fish, fish preferably always, fish preferably. I'd eat the oily fish. I'd have the E tablets every morning with the 400 IUs, the antioxidants, I'd eat grapefruits till they come out of my ears, every breakfast as much as possible even now. I love grapefruits.

All the things that I've picked up on that these would keep you on the good road to a healthy lifestyle, I've done. I really, I was angry about that because I thought well I've done everything I should do, I couldn't do any more.

Lists the reasons he invented to explain his symptoms.

And one particular occasion, the first time in my life ever we were out shopping and in the afternoon I went to the toilet in a department store. I thought well this is crazy, something's wrong and I began to think I had piles (laughs) of all things.

One particular time there was a little bit of blood in the toilet water and I thought oh it's because I've been straining, that's what people say.

And then I thought well I must watch a little bit more carefully and I began to watch and after I'd been to the toilet I'd looked in the basin and a dark red colour was coming out of the toilet and I thought oh strange, oh it's all that beetroot I've been eating, I've a passion for beetroot. I kept having reasons why I kept having these symptoms.

His pain management broke down completely.

Show in context
SHOW TEXT VERSION
PRINT TRANSCRIPT
What they'd done is in the meantime they'd tried putting me on the one where you have a little button and you can apply the morphine yourself.

It started off, I mean me pressing a button like mad but it will only give you what it will give you.

It's programmed. The switch or button failed and I could, I didn't turn my head much but I could hear and I could hear a number of nurses to my right discussing how to make it work and then I heard one young lady say well if I had a book of instructions I could work it and I thought well if I had the book of instructions I could work it but you just had to lay there and it was I suppose the worst 12 hours of my life (laughs) looking back.

Did they not have another machine to bring you?

Yes that came along and that was broken.

Looking back that was really bad. My surgeon wasn't there so he didn't see what I had to put up with.

Why do you think they waited so long before they did anything?

I don't know, I think they kept hoping something else would work, these machines and things.

At that moment in time was in so much pain I couldn't care less if I lived or died at that time.

He was confused by his surgeon's explanation of his coming surgery.

Show in context
SHOW TEXT VERSION
PRINT TRANSCRIPT
The week afterwards I went in for the operation and whether my consultant was trying to be a little bit flippant in, well not flippant maybe trying to, maybe ease my tension by talking very lightly about the operation in as much he said "We will inspect the bowel and then pop it back."

And I went away completely confused because I mean I'm the sort of guy that I know where my hand is because I can see it but anything else I'm sort of not with it.

And I assumed wrongly that the operation would all take place up my back passage and I woke up with a fright finding this great big scar down my front tummy.

When I asked the stoma nurse, when she came to visit me in the hospital before the operation, because they were going to do an ileostomy first of all as well I said to her "well where does my bowel go that people check it out and then put it back?"

And she said "no you've got the completely wrong end of the stick." And then she explained to me fully that the operation would give me a stoma which will have a bag whilst the rest of my body because he cut away my rectum and part of my colon, re-pulled the colon down past the anus, re-stitched it in that position, in a U shape, cut a hole in it, so I had a completely new area made for me.

Continued with chemotherapy to help reduce his wife's intense worry about him.

Show in context
SHOW TEXT VERSION
PRINT TRANSCRIPT
I started into chemotherapy in the January. I'd seen the oncologist previously, I was a bit astray in my brain at the time, I was finding it hard to cope. My wife wanted me to continue.

The guy I was talking to explained the symptoms that might happen, that did happen. Nausea, mouth ulcers, diarrhoea, all these things. They're in smaller doses. You don't have them all day every day, you have them some of the day some days in my particular case.

I did contemplate not having the chemotherapy. I had to go back for a second visit because I couldn't clearly make up my mind that did I want another six months out of work, did I want to drag this all out, I wanted it to end.

It was explained to me that the chemotherapy would give me a better chance of survival. Like everyone I wanted to survive but at the same time I didn't know if I could have another six months of being pulled about, in my mind of course.

I came home from the oncologist and I looked at my wife and she was falling apart. She couldn't cope much more. I had to say yes deliberately purely to see my wife's face brighten, not be so unhappy.

An accident with his stoma bag caused extreme distress.

Show in context
SHOW TEXT VERSION
PRINT TRANSCRIPT
The bag, it was very hard to cope with at first. I mean we had a stranger in the house asking me questions, about Social Security and things like this and the bag came off and I sat here and I just cried with embarrassment. I just couldn't cope with a stranger in the room as well.

And my wife took me from here to the toilet and she had to completely undress me and I just stood there crying. And I had to, my wife is such a brick, the things she's done for me, she just moons in, carries on, clears up, no tears, no nothing she's so strong and it made me upset to see her coping with me. I wanted to cope by myself and I couldn't.

I think that's the hardest thing to watch someone you love looking after you and you feel as though you should be doing it, as the man you feel you're the protector, the provider, the everything. To see your wife washing your feet or creaming your feet or taking your underwear off or cleaning you up it's so humiliating.

Even in front of your wife I thought "oh God I didn't want her to have to do things like this for me ever, ever."

Explains how he learned to manage his stoma in hospital.

Show in context
SHOW TEXT VERSION
PRINT TRANSCRIPT
I was in hospital for 14 days and then the nightmare was to look at my stoma. I'd go into the bathroom and of course the nurses were cleaning the stoma and washing part of me and well I thought I've got to look down at this.

I looked down and thought oh my God what is it? It was part of me and it was horrible (laughs). It was, first of all it made me recoil and I thought I can't cope, I just can't cope.

The stoma nurse came to visit me and she said "You must learn to look after your stoma." There was lots of instructions how to clean it, what to do, what not to do. I listened very carefully, I've got to cope with this, I'm going to be on my own and of course the nurses did not look after my stoma, it was up to me. The quicker I looked after my stoma and everything else the quicker I could go home.

Took charge, bite the bullet, once I got used to looking at it and cleaning it myself I did begin to cope with it quite easily, so much so that, I mean, my wife had sat in on the sessions saying that she would be able to help me but of course there are times when you're on your own in the hospital late at night you're on your own, you can't call the nurse, you've got to cope.

And I did and it was quite, quite reasonably easy after a while I found to cope.
Previous Page
Next Page