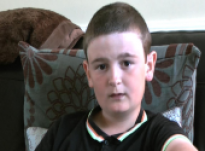 Age at interview: 11
Age at diagnosis: 6
Brief Outline: Toby was diagnosed with migraines at the age of 6 years. He recently took part in a randomised placebo controlled drug trial. Toby has completed the trial and found out that he was taking the placebo and not the drug.
Background: Toby aged 11, is White British, lives with his mum and attends a local primary school. Toby's after school activities include boxing, cycling, football and tennis.

Toby aged 11, is White British, attends a local primary school and lives with his mum. Toby loves to play football and tennis and also likes cycling and boxing. Toby was invited by the doctor he sees at the hospital to take part in a randomised placebo controlled drug trial. The trial was double-blind which means the doctors and those treating him didn’t know whether he was given the placebo or the drug. He says that everything was explained to him and his mum. He describes a placebo as being like a ‘mint’, it doesn’t do anything. He also understands about the term randomisation because the doctors and the information booklet he received explained everything very clearly. It was also explained about possible side effects. Toby was happy to take part and signed an assent form and his mum signed a consent form.

During the trial Toby had to take medication for 10 weeks. The first 6 weeks he had to take two pills and the next four weeks four pills. They were very small and easy to swallow with water. His mum also had to complete a questionnaire about how Toby was feeling during the trial including the number of migraines and if he had any side effects.

He says that at the end of the trial the researchers told him he had been taking the placebo.

He says taking part can help him and other children with migraines.

Toby explains the need for clinical trials in children and young people.

Toby explains the need for clinical trials in children and young people.

View topic summary
SHOW TEXT VERSION
PRINT TRANSCRIPT
Do you think it’s important that you do take; young people like your age do take part?
Yes.
Do you?
Yes.
Why is that?
Because adults have different, see if adults were still getting migraines it would be different so you get a couple of children then it would be better because their brains are different.

A placebo is like a mint or sugar and water, says Toby.

A placebo is like a mint or sugar and water, says Toby.

View topic summary
SHOW TEXT VERSION
PRINT TRANSCRIPT
So how did they tell you what randomisation means?
Like out of so many different pills they like shuffle them all up and grab one and then it like they gave it me and then they done that to everybody else that’s inside the trial.
Right okay so that’s how he explained it?
Yes.
Did they use words like control group and or placebo?
Placebo yes.Because a placebo inside the like the medication a placebo’s one of them.
Okay. And can you tell me what you understand by a placebo?
It means it’s basically, say out of the actual drugs and, it means it’s like basically just a mint, say something like that because it don’t really mean anything it’s just like sugar and water basically, that’s it.
Previous Page
Next Page