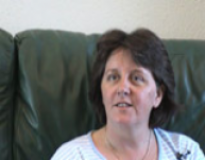 Found back exercise classes very helpful and has been able to continue with the exercise at the gym.

Found back exercise classes very helpful and has been able to continue with the exercise at the gym.

Well, when I went to the physiotherapy, initially when I first did my back, they did, as I said to you, they didn't do anything, I went to see my osteopath. But as time's gone on, it has got worse and I had been to the hospital, back to the GP sorry, and they referred me for physiotherapy and they sent me, as I say, to this back class and, I think it was about 6 or 7 weeks.

And you basically, there was about 15 different exercises and you were timed on each one for about 2 minutes. And there were things like, on a bike, you sat on a bike and you just pedaled the bike. You had, there was a trampoline, there was very small weights that you sort of lifted to your shoulder and above your head and back down again and it was, it was a very relaxed atmosphere you know. It wasn't a race or anything.

There was a set of steps that you had to walk up to and then down to and back up to and back down to again, which is quite hard work actually, you don't realise. And that, and I did that, it took roughly an hour a week that I did that for. And what they were trying to do was to get to my inner muscles in my back, the ones that you can't actually feel, to strengthen those muscles and I do have a list of exercises that I brought away with me that, when I go to the gym, I do try and do, certainly some of them. I do a lot, quite a bit of cycling anyway, well try to, time permitting, to help anyway.

So, I mean I do go to a gym. People say 'You've got a bad back, how can you go to a gym?' Certain things I don't do. I don't run and I don't go on the rower, rowing machine, and things like that. But there are' My philosophy is that if it's hurting then I'll stop doing it or I avoid doing it in the first place. But there are quite a lot of exercises that I can do that a) help obviously keep fit but also does help my back as well. So I do as much as I can to try and help myself as well.

Sees an osteopath and finds that manipulations help her headaches and thinks complementary...

Sees an osteopath and finds that manipulations help her headaches and thinks complementary...

View topic summary
SHOW TEXT VERSION
PRINT TRANSCRIPT
When my back is quite bad, I tend to ring him (osteopath) and I will go every month for quite a while. I do find once a month is enough because he basically massages my back and manipulates me and he also, I have a lot of problems with my neck. Because I asked him to explain why I have to keep going when, if he puts the joints sort of back together again, for want of a better word, put them back into place should I say, why does it all come out again.

And he basically explained that, from an evolutionary point of view, we shouldn't be standing upright. We've only got sort of a tent pole, for want of a better word, holding us up. If you damage that in anyway, it won't repair itself fully, it will always be damaged. So if, depending on what the problem is, when I first went to him he said 'Do you have any problems with your neck or between your shoulder blades', this was 12 years ago, 11 years ago, and I says 'Well no'.  I do now!

I do get quite a lot of bad headaches actually and I tend to find, when I go to him, he puts the vertebrae back sort of, it sounds like there's a crack, it's not painful at all, it sounds horrible when he's doing it, but it's very good and the headache will go virtually straight away. It's absolutely fantastic.

So I'm all for saying to people 'Look, you know, well I know somebody that can help you' because the GPs are very good at giving out anti-inflamatories, but that isn't always the answer. Not everybody wants to pop pills and, in fact, tonight I start a college course in reflexology, because I think alternative and complementary medicine is getting quite popular because I think people do want that. They don't necessarily want to pop a pill because it doesn't always work, 'cos that doesn't work with me.  So if I think, you know, if he can do that then that's brilliant from everybody's point of view isn't it?

She was originally prescribed one drug but couldn't tolerate the side effects so was given a...

She was originally prescribed one drug but couldn't tolerate the side effects so was given a...

View topic summary
SHOW TEXT VERSION
PRINT TRANSCRIPT
The actual antidepressant I'm on is Imipramine. I did, they gave me amitriptyline initially and that was awful. I only took a very short term, I was due to take it for quite a while and then I was only on, I think it was on 25 or 30mg a day, I can't remember exactly.

I took the first dosage and the next morning I felt like I was drunk. It was the most horrendous feeling. I drove to work, but I really shouldn't have done because I really did fell very peculiar. I didn't feel I was, it was almost like having an out of body experience. That's the only way I can describe it, it was a horrible feeling.

And at work, all morning I was really struggling just to work and it wasn't till about half past eleven, twelve o'clock I was actually able to be awake. And I thought, 'Well I can't do that, obviously'.  So I spoke to a friend of mine whose daughter's on it, unfortunately her daughter's got ME, and they're giving it her because she has a lot of joint pain and they've given it her for that, although they've since changed her medication.

So she said to me 'Don't take it just before you go to bed, take it about eight o'clock and the effects should have wore off by the time you go to work' and it did work, but I still didn't feel very well at all. I really... the doctor at the hospital did say that there are alternative drugs they can give, so I did actually stop it straight away because I just felt, and I was fine then, I had no problems.

So, when I went to the hospital for the injections into my facet joints, I explained what had happened, and she says 'fine, we can give you another one, that's not a problem' and that's when she prescribed imipramine, which I don't have any side effects, apart from the constipation.

Feels it is important to explain things to children when they ask.

Feels it is important to explain things to children when they ask.

View topic summary
SHOW TEXT VERSION
PRINT TRANSCRIPT
Over the years obviously because my conditions I've had for so long now, different things have come up that I've had to go into hospital for, say a laparoscopy or an appointment, just an outpatient appointment at the hospital and they've had to go say round to their grandmothers, because I'm not here when they're home from school.

I don't think I've actually sat down with them and told them exactly what it is because, as I said earlier, I tend to deal with things myself. I think I have explained to them about endometriosis, but children are children, they'd rather watch television than worry about what's up with Mum, you know.

But if the situation, or at that time has arose and they've asked questions, I've always answered them. I've never told them, you know, to go away or anything. I've always answered any of the questions that they've got and I think that's very important.  That, if you do have children and you've got a long term condition that they, if there is a question that they want answered, that you should answer it as, as clearly, so they understand, depending on obviously what age they are.

You know, I don't think they should be told to shut up and go away, you know. I think that's the wrong attitude. And that goes with other members of your family as well, not necessarily your immediate family, but because other people obviously are involved. If I've been in hospital, my parents have had to help and my husband's parents have helped and friends have helped, and so most people are aware of what's gone on over the time and they've all been very good.