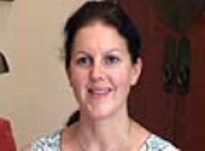 Age at interview: 41
Age at diagnosis: 33
Brief Outline: Genevieve was diagnosed with CIN3 in 2000, aged 33, and treated by LLETZ. She had a serious bleed the following day and had a minor operation to treat that. Since then, Genevieve has had two healthy babies, both delivered naturally.
Background: Genevieve is married with two daughters. Ethnic background / nationality' White Irish

In 2000, just before getting married, Genevieve went home to Ireland and had a dental check-up and routine cervical screening. She had her last smear test about eighteen months earlier so was not expecting to have any problems. Two months later, though, she received a call from her doctor who told her that she had CIN3. She was now married, living back in London again, and had just started a new business. She was shocked, particularly as the test eighteen months earlier had been normal.

Genevieve had private health insurance and decided to be treated privately. She also spoke to her father and sister, both of whom were health professionals, and said she felt reassured by all her conversations with health professionals that CIN3 was pre-cancerous and could be treated. She had a colposcopy and, in a following appointment, a LLETZ under general anaesthetic.

The following day, at home, Genevieve had an extremely heavy bleed and went back into hospital. She had a minor operation, again under general anaesthetic, and has been fine since. Genevieve said the heavy bleeding had been extremely shocking and she would have liked more information on why this had happened.

One of Genevieve’s main concerns was having children. After her first clear follow-up smear test, she started trying for a baby and became pregnant two months later. During her pregnancy, her doctor kept a close eye on her and she was given scans almost every three months. She had a healthy pregnancy and delivered naturally. Two years later, Genevieve had another baby and, again, had a natural delivery.

Genevieve said that, when she talked to friends about her experience, she was surprised at how many other women had had treatment for CIN. She now has annual smear tests at her GP’s surgery and hospital follow-up appointments every eighteen months. Since her treatment, her results have always been clear, though Genevieve said she had bleeding between periods and after sex about four years ago. This was due to some polyps on her ovaries and these were removed surgically.

Genevieve was given a light general anaesthetic and describes what happened when she went into...

Genevieve was given a light general anaesthetic and describes what happened when she went into...

Even though it was a light general anaesthetic, I was just a bit flattened by the whole thing. And I think maybe just the whole sense of relief that I felt while I was there, that I wanted it out of my body, it was actually finally removed, so I just had a huge sense of relief.

So for someone who is looking on the internet and wants to know what will happen on the day of treatment, they know that they’re going to have a general anaesthetic and then a loop diathermy. Could, can you explain what happens on that day?

Well I went in nil by mouth, so I had nothing to eat the night before. And I had to arrive in at 6 o’clock in the morning. So arrived in and just did the registration and, you know, they gave me the gown. And I was the first on the list so there was not too much hanging around, which was nice.

And the anaesthetist came to have a chat with me. Just asked me some general questions about my health. If I was allergic, had any allergies, and then they gave me, they took me down, wheeled me down. And I went into the sort of pre-op room and they gave me, put the needle in just to give me my pre-med. So, you know, needle, not very nice, but that’s fine. And, yeah, and then I had the pre-med which makes you feel quite wonderful actually.

And then, you know, count backwards from 100, and I think I made it to 97. And the gynaecologist surgeon had already come in before that and just said ‘welcome’ to me. And, you know, “Do you understand the procedure, this is what I’m going to do.”

And I came round in the post op and obviously just a bit groggy and very thirsty, and felt fine. And then was up, back up to the room. And had a long sleep, and had a big cup of tea with loads of sugar and a slice of toast. And that was it. My husband came, came back to pick me up and went home then.

No pain whatsoever? There was no discomfort?

No, but I was on, they’d given me just oral painkillers. So I was just having, I think paracetomol or something like that.

Genevieve has annual cervical screening tests (smears) at her GPs surgery and regular...

Genevieve has annual cervical screening tests (smears) at her GPs surgery and regular...

Everything was fine, and just once a year you just continued having regular screening?

Yes I do. I mean I actually go through, just through my regular GP, NHS GP practice, and I do their screening. So they’re obviously appraised, have all my notes and appraised of what I’ve been through, my history.

But I have been advised to go back to my original gynaecologist because the tests that they do would be more thorough and would cover the Papilloma Virus. Just to check if there’s any reoccurrence. So I was a bit surprised at that because I was sort of happily going along to just my NHS practice.

And who advised you to go back to the original consultant?

His secretary. Because she called me and said, “You haven’t been for eighteen months.” And I said, “Oh it’s okay, because I had my tests and everything’s fine.” And she said, “I recommend that you, that we also do it, absolutely fine to do that as well, but that we do it because it’s a more thorough examination.” Which I was a bit surprised at. And so I continue to go to both.

So you have two smears a year?

Genevieve got pregnant shortly after trying for a baby. She was well looked after by her doctors...

Genevieve got pregnant shortly after trying for a baby. She was well looked after by her doctors...

I had a test then just before Christmas. The doctor said everything was clear and looked fine, but he obviously took cells and they were all checked, and I got the results in January. Started for a baby immediately and got pregnant in the March. So literally about two months later we were pregnant. So I did have some concern about my cervix because they’d taken quite a piece of my cervix away, that I might have an incompetent cervix.

But I was referred by the original doctor who did the treatments, to a good obstetrician who was aware of my treatment, in the same hospital, and he kept a very close eye on me. And I had a very normal pregnancy all the way through, and went through and delivered naturally 42 weeks later. And now have a seven year old who goes to school and two years later we had our second daughter. So I’ve got a seven and five year old. I continue to go and see the original gynaecologist and I have regular, annual smear tests.

Genevieve was happy with the information she was given and felt well informed.

Genevieve was happy with the information she was given and felt well informed.

The doctor’s secretary was very knowledgeable and she told me not to worry, that everything was fine. And I was concerned that waiting three weeks was too long, and she said it wasn’t a problem.

And then she explained what was going to happen, so they sent me out some information about CIN3, about the cervix, what I could expect from the treatment. That I was having a colposcopy, that that was like a smear test but they just put some, a bit like vinegar, acetic acid, that it wouldn’t be painful and that they’d use a camera and that that was the procedure. That it was little more than a smear test. And then they’d check the results and we’d see how we would go from there.

I got a sort of information pack sent out with diagrams, showing exactly what was, what I should expect. And about the, that it would be, I’d have a light anaesthetic, that I’d be in for the day, that I’d come out that evening. And that they thought the cell, whatever they removed would be sent off for further tests. Just to, I suppose to see the extent of the pre-cancerous cells, or see if anything had developed further.

So yeah, I felt very well informed. Sort of read the pack, went “Okay,” put that away. I have my appointment, and I had my appointment at that stage, and it wasn’t for another month. And I just thought, right, well there’s nothing really I could do, so I just you know got on with life. And obviously it was always in the back of my mind. But I just felt I was on the right road to being looked after.

And you felt that you had all the information you needed. Did you look elsewhere at all? Or generally you felt, ‘I’ve got good information I don’t need too much more.’

No, I genuinely felt I had good information. I obviously did look on the internet, but I felt more comfortable actually speaking to people, because if I had questions then they were able to be answered.

Genevieve bled extremely heavily the day after having LLETZ under general anaesthetic. She went...

Genevieve bled extremely heavily the day after having LLETZ under general anaesthetic. She went...

I had a light general anaesthetic. Went in that morning and my husband came with me. And it was, you know, it was absolutely fine. I knew what to expect. I actually thought I would be more uncomfortable afterwards than I was, given what they were doing.

But I left at six o’clock that evening, and felt fine. Was reassured that everything had gone very well and that they’d be in touch. And then I took a few days off work, but the next day I had been sitting down doing some ironing, trying to rest. And I stood up to go to the toilet and just had a huge bleed. I don’t know why, but something hadn’t been sealed, or I don’t really know, but I…

So you just started bleeding?

Poured out. So I called the hospital number, of the ward I’d been on and they said, “Well that’s not abnormal for you to bleed afterwards.” So they said, “Go to bed, take a couple of paracetamol and just go to bed and drink plenty of fluids.” And let them know. And I had sanitary towels that I was using, which they had given me when I left the hospital. And I was going through one every sort of 15 minutes, and was just feeling quite shocked at that stage and shaky. And my husband had gone back to work at that stage, so I called him. I called my sister, and called the hospital again, and I just said, “I just don’t feel right.”

So I just got straight into a taxi and went in and yeah, they just couldn’t stop the bleeding. So I had to have another, a minor procedure to stitch or cauterise, whatever it is they had to do to stop it. And then I was fine. I’d a very quick recovery after that.