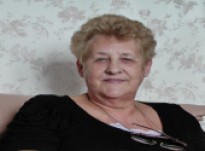 Age at interview: 69
Brief Outline: Val's husband Fred was diagnosed with cancer in his kidney which could not be cured. Val describes him as an amazing man and she cared for him in his final years.
Background: Val is widowed and has three daughters. She works as an estate manager. Ethnic background' White British.

Val’s husband Fred was diagnosed with kidney cancer in 1999. At the time Val remembers how Fred’s diagnosis was a real shock for them both. Fred had a kidney removed but his recovery period was prolonged because of previous heart surgery he had had. Two and a half years later they discovered that the cancer had spread to his other kidney and although they were able to remove part of his kidney they could not replace it due to his previous health issues.

From this point on everything changed in their lives; Fred had to have regular hospital check-ups and blood tests to evaluate his kidney function. Val describes how the care he required became constant and amongst other things, she helped him to shower, go to bed and take medication. Val did not feel she got enough help or information during caring for Fred and believes that it all seemed to be left to her.

About a year after the diagnosis Fred had to go on dialysis and Val describes this period as ‘horrendous’. Fred would be collected in the mornings and taken to the hospital renal unit and put on dialysis. Val was very dissatisfied with how the renal unit was organised. She describes how they were very dismissive and did not seem to listen to Fred’s concerns. As a visitor she felt very unwelcome on this unit; she wanted to be involved in the care and go into the room while he was on dialysis, but they would not allow her to do so.

Fred’s condition was deteriorating and Val describes how he started to behave out of character, being disagreeable, disorientated and confused. Later, after Fred had died, Val discovered he had also been diagnosed with vascular dementia but she was never told. Thinking back she discusses how, with this knowledge, his out of character behaviour suddenly made more sense to her.

After a difficult dialysis session, the doctors suggested that they should stop future dialysis and Val accepted this. At this point she knew he only had two or three days left to live and desperately wanted him to come home to die. Unfortunately they were unable to get him home in time and Val describes how Fred died on a busy hospital ward with lots of commotion around them and little privacy. She still feels very upset about this and believes more should have been done to provide a more peaceful and calm environment.

Val discusses how both Fred’s and her daughters have provided her with great emotional support after Fred’s death. She describes his funeral as, ‘amazing’ as there was between three and four hundred people there and they collected over £800 in donations for the Salvation Army, which will be used to make bibles and a flag in his memory. Before Fred died he had underlined a piece in his bible which Val happened to stumble across. This was read at his funeral and she describes how this was a great comfort to her. Caring for her husband really took its toll on Val’s finances and health which makes it more difficult to deal with his death. She advises others to ask and push for help, and not to run themselves into the ground as she feels she did.

Val found it easier to help her husband with personal care herself than try to organise help...

Val found it easier to help her husband with personal care herself than try to organise help...

No, no. No, none at all. I had contacted social services I must admit and that’s when we started the meals on wheels and it was case of, you know, “Well, can Fred wash and dress himself?” “Well, yes he can but I have to be there to supervise.” So it never really worked out and, in the end, I used to think, because I know I have a job to get things out worked out for, you know, some of the residents, so I knew it was going to be difficult for me for Fred.

So in the end it was just easier for me to do it. You know, I saw to him before I went downstairs to work, give him his breakfast when he wasn’t on dialysis and then, as I say, I’m in the house so it was always a case of, but no, I didn’t get in any help.

Finances were difficult when Vals husband had kidney cancer and they continued after he had...

Finances were difficult when Vals husband had kidney cancer and they continued after he had...

Did you find that Fred being unwell put a financial strain on you?

Huge financial strain. Yes, it did and it’s left me in a huge ball of, I don’t know what to say, but it is now because I lost Fred’s money when he died and there is quite a good chance now that I will become bankrupt. Yes, it was awful, really, I couldn’t get any help because I still worked. I couldn’t get any benefits. Fred had attendance allowance but it cost me forty pound a month for his hospital car and then you’ve got to think about all the other things. I mean, how many times I’ve been sent for to go to the hospital. There’s no bus service from [Town] or very little, every hour or every two hours, whatever it is, but at the moment there isn’t a bus to [Hospital Name] and so it was taxis. Well, that’s ten pound each way and I’ve done that so often but I’m not putting all the blame on Fred for the situation I’m in but most of it is. The extra food I had to buy. The clothes, he went down to about six stone from about a twelve stone man. Clothes just wouldn’t go near him. He ended up just living in training bottoms and things because he you couldn’t buy him decent clothes because the weight was just falling off him.

Heating in the house, that I had to have the heating going, you know. We only got them one night storage heater but I had to have extra heating for him because he was so cold. Oh, yes. It was awful. Great and again, it was silly little things like Fred would have a shave and he would say, “Val, this razor is not working. Have to buy another one.” Okay but then he’d find another electric razor. He ended up with about five electric razors. I did it to help him to keep the peace but really I don’t think there was anything wrong with these razors but I couldn’t argue with him. I just did it, you know. So yes, maybe it was all my own fault, maybe it was, I don’t know, but I just wanted to give Fred everything that he needed be it the cost to go and visit our daughter in Wales was a, you know, she’d got a young family.

There was no room as such. There were stairs. I couldn’t trust Fred on stairs, you know, on his own. Here we got the lift. So we stayed in little hotels or Travelodges but, you know, it would cost me a fortune just to go away for a weekend to give him a break, as well as to see the family. Yeah, it’s great and I don’t know how I’m going to get out of this one yet still. I think I could cope better with Fred dying if I didn’t have this worry behind me.

So that’s still with you, the financial worry.

Val wanted her husband to die in peace at home but he died on a noisy hospital ward; Val found...

Val wanted her husband to die in peace at home but he died on a noisy hospital ward; Val found...

I would have liked to have had him home just to be peaceful because Fred was on the ward. There was no, little room available for him at all. They were all too full up. We were on the ward. We were by the nurses’ station. They had the curtains around him most of the time anyway but this particular day that he died, oh God it was horrendous. They were hoovering. They were shouting, “Do you want tea? Do you want, what do you want for your dinner?” And, and we were behind the curtain and there was Fred being injected because he was, you know, getting worked up and they were trying to keep him calm. Every time the curtains opened for somebody to come in, everybody was sort of looking. Oh, dear. That was awful. It really was horrendous and I said to them, “Isn’t there anywhere please you could put us?” And they said, “No, there isn’t. We’re sorry. All those single room aren’t available.” There was a room that should we want to stay overnight, which was in the corridor, that we could have slept there because there was a bed in there. I said, “Can he go in there please? Can you put him in there just to have a bit of peace to be with him?” And they said, “No, we couldn’t.” And he actually, died on the ward and just we had to walk away and leave him there with the curtains around him. That I found, that haunts me... sorry.