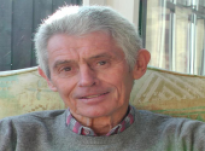 Age at interview: 69
Brief Outline: Linda has been diagnosed with a rare cancer and Brian supports her cancer journey, by attending hospital appointments and support groups with her, and also helping around the house. Brian enjoys running; it is a time for himself and for reflection.
Background: Brian is a retired from his job as cabin services director for a national airline. He is married to Linda and they have no children. Ethnic background' White British.

Six years ago Brian’s wife Linda was diagnosed with Metastic Epithelioid haemangioendothelioma (EHE) of the aorta, a very rare cancer.

Initially Linda was treated for pain and a persistent cough but she was diagnosed with EHE after 2 years. The first time Brian was aware that there was anything seriously wrong with Linda was when she returned for a business trip abroad. She had been unwell whilst away and on her return sought out further medical opinions.

Linda had a CT scan which showed a tumour and marks on her lungs. This frightened Linda and although Brian was worried, he felt a little bit disjointed, as if it wasn’t happening even though he was there. They were told that Linda would need a biopsy which, due to the tumours location, would involve an operation. The medical team were unsure that Linda would survive the surgery. This was very distressing. Linda was so upset she was unable to concentrate on what the medical team were telling her, so Brian had to really pay attention so he could explain things to Linda later. This was Brian’s first experience of being told anything serious about his wife’s condition and it was frightening for him.

After several delays due to hospital; bed availability, Brian drove Linda to a major hospital a long way from home to have the biopsy. Brian found it hard to leave her there. He made the journey every day to visit her after the operation. They were still not sure exactly what the problem was and not knowing became increasingly worrying. It was another couple of months before they were given the diagnosis of EHE. The tumour was inoperable due to its position and Linda was prescribed Imatinib.

Linda decided to take action herself and contacted a specialist in New York. She was able to go for a specialised treatment which was not available in this country. Brian accompanied Linda to New York for the three weeks of treatments. Although they had to pay for the treatment themselves, Brian feels it was worth it as Linda’s tumour shrunk after treatment. This gave them both hope.

Brian accompanies Linda on her hospital appointments and sometimes attends the treatments and consultations. At one point her consultants recommended an expensive drug and the local Primary Care Trust refused to fund it. Linda successfully appealed against the decision.

Linda has become very involved in cancer support groups and Brian accompanies her to all her group meetings, often sharing the driving so Linda does not become overtired. He feels he has learnt a lot from talking to others at these meetings. Brian feels that sometimes Linda takes on too much although he doesn’t like to ‘nag ‘ her to slow down, he feels it is better for her to be happy and busy, than for her to stop activities she enjoys.
Due to some problems Linda has with swallowing, Brian is a little on edge at mealtimes in case Linda starts to choke. She did choke once and he had to administer the Heimlich manoeuvre so she could breathe. They do not feel able to go out to restaurants very often now; if they do go out for a meal they make sure they sit near the door or the toilets in case Linda starts to choke and needs to rush out.

Linda is undergoing regular scans and check-ups and at the moment she is reasonably stable. Brian recognises that Linda is going through a lot, some of which she may not tell him, but he knows that she will ask if she needs anything from him. Linda organises all her medications so Brian sees his role as supporting Linda and helping keep her spirits up. He feels if he were to start worrying all the time he would pass it on to Linda, so he tries to keep positive and takes each day as it comes. He is thankful for every day that Linda is with him.

Brian has never thought of himself as a carer – he is just taking care of his wife. He feels it is fortunate that he is retired and has the time to care for Linda as previously his work took him away from home for several weeks at a time and he would not have been able to look after Linda.

Brian gleans information from accompanying his wife to hospital appointments; at first he felt...

Brian gleans information from accompanying his wife to hospital appointments; at first he felt...

So I pick up all the information from the people that that we get at the hospital and they to, tend to give me information now. They used to sort of, at one stage, I thought I was just sitting there as, as a person that was just carrying Linda into the room to speak to them but it’s now got to the point that when they speak to Linda they actually, speak to me as well.

Does that feel better?

It does now but, of course, there’s a lot of the medical talk that I still don’t know or understand and even when Linda gets back she’ll, she’ll have the sheet of paper and she’ll look up some of the words they’re talking about. But they will explain it to her now if she asks them, which is a good thing.

Because, as you know, in the medical world some of the really long words, nobody actually knows what they mean because it’s like a mystery.

So it’s, it’s good in that sense that you do get some feedback now from the doctors and the oncologists and they don’t look upon you now as a sort of irritant being there and making sure that they don’t, you know, do their job correctly. Which I think they’re more relaxed and I think that helps.

Brian felt that professionals sometimes just gave test results and did not take the time to...

Brian felt that professionals sometimes just gave test results and did not take the time to...

I think they need to tell people exactly what’s wrong with them. Sometimes they, they tend to sort of, I have impressions sometimes, with some of the ones that we’ve met that they’re looking at the paperwork and they’re not really showing as much as interest, seemingly, as you think they ought to. They’re just pulling bits of paper up and looking at it and reading out what the results were and then saying, and leaving it all to Linda like, “How are you feeling? What do what do you want? What do you think?” Which I tend to think is if they’re the professionals they should know a bit more of what’s going on and give Linda a little bit more help and tell her that, rather than Linda have to force it out of them as to what’s going on.