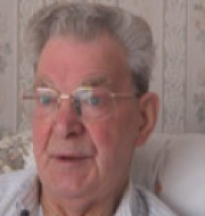 Age at interview: 78
Age at diagnosis: 68
Brief Outline: His wife developed multi-infarct dementia. He cared for her at home for about 6 years. When she went into residential care it took a long time for her to settle. She died in the nursing home.
Background: Carer is a husband who cared for his wife first at home and then later in residential care where she died. They have 3 children. Carer's occupation was a retired Civil Servant. Occupation of patient was a Housewife.

Describes the contact they had through music despite his wife's increasing dementia.

Describes the contact they had through music despite his wife's increasing dementia.

She continually asked to come home, perhaps even longer than a year, and she used to plead with me to bring her home, and that was heartbreaking. It was very difficult. I was visiting her every day and every day I was coming away knowing that I'd let her down; that is to say I hadn't acquiesced to her wish to come home.

But I found the following day that she'd forgotten all about it within a very short space of time and eventually I was able to reconcile myself to the idea that although her desire to come home, and this time we're talking about her own home, with me, was very, very strong, she soon forgot about it when I left.

And so eventually it became easier to bear. But there was still the heartbreak of seeing her deteriorate physically and mentally. I did find that by singing to her old songs, I'd got a song book which just had words in, mostly war-time but some subsequent, I found that she was able to join in, remembering the words, this I found quite amazing. Often remembering word for word some of the old songs. Including in particular one that was our favourite when we were courting and that seemed to make the visits much easier than they would have otherwise been.

But eventually even that went. And, she would still respond in some ways, she, would smile a little when she heard the songs, but she ceased to be able to remember them, just the odd word now and again. She rarely if ever knew me as her husband, she would ask 'Where's [name], have you seen him?' and of course by this time I'd become so used to it I used to accept that I wasn't [name] and I used to tell her that he was OK but he hadn't been able to get here, you know, and that I was her good friend and she could rely on me. And there's no doubt that she became to accept me as being a reliable substitute anyway.

But eventually of course she reached the stage where she was first of all refusing food and over a fairly long period of months the, an attempt to feed her with liquid foods, but then she started to refuse liquids as well, even water.

Asks people not to be judgmental of others who do not feel able to become carers.

Asks people not to be judgmental of others who do not feel able to become carers.

SHOW TEXT VERSION
PRINT TRANSCRIPT
Well what I would say to carers, and I say this at carers' meetings, not infrequently, is 'You must think of yourself'. Of course you want to do your best for the person that you're caring for and this is particularly the case in the case of ladies who are in my experience go even further than most men would go. And that's a generalisation which of course can be criticised by reference to certain cases, but generally speaking in my experience women are natural carers and pull out the stops to a much greater extent than a man would.

To give examples I'm talking now about, carers who are, have difficulties not only throughout the day but throughout the night as well. Who have to get up during the night to escort them to the toilet and things like this. I didn't have a great deal of that. It did happen but I didn't have the kind of situation where I had to stay up all night, or most of the night and didn't have any sleep and still had the following day to go through.

Impress upon them the fact that it's all right for them at a distance to say 'Well you can't let them down,' or 'You can't let her down.' 'I wouldn't like to see me Mam or me Dad treated like that.' They're speaking from a distance, they don't live with the person, they haven't lived and grown up with the person like you have.

They haven't got the emotional involvement, theirs is a different kind of involvement. So even if they feel that you should do more, you've got to impress upon them the fact that you can't do more. Remind yourself of this, it's twenty-four hours a day, seven days a week, three hundred and sixty five days a year. How would they like it? How would they cope?

It's a terrible thing to have to say and I regret having to say it but you've got to think about yourself from time to time. And I keep reminding carers whenever I see them of the number of instances I've had where a perfectly healthy carer who's stuck it out longer than they should have done, dies.

In one case in particular I remember where a, a carer died in the presence of the person he was caring for and nobody knew. She was still watching the television when several hours later a member of the family came into the house and found that the carer was dead and that the person being cared for was sitting 'happily' - in quotes - watching the television. How sad. And they then had to go into a home anyway.

His son had a different approach to his sisters to visiting their mother.

His son had a different approach to his sisters to visiting their mother.

View topic summary
SHOW TEXT VERSION
PRINT TRANSCRIPT
Well with the family I think my son was different from the girls, I've got two girls and a boy. My son used to use the expression that 'he couldn't hack it.' The fact that his mother was ill with an illness that made her not his mother made it so difficult for him that he didn't visit her very often. And when he did visit it was a fairly quick affair.

He used to occasionally go along and take his young son with him. His young son knew my wife as Nanna but he, and he used to talk to her as though there was nothing wrong with her and you could see that she enjoyed it, initially anyway. But after a while even the son, the grandson's attentions began to irritate her from time to time.

And [name] my son gradually reduced his visits and it was always a little bit of a bone of contention between us, the fact that he didn't carry on, or he didn't go to see her very often.

Both the girls pulled all the stops out. They went to see their mother as often as they could. They made a fuss of her when she was there, a greater fuss than I could make, made her face up and cut her nails and did all the sort of things that ladies like to have done to them you know.

Sometimes even though it wasn't fully appreciated at the time it did them good to do it. And throughout the relationship with the two girls was great. They knew I'd done what I could and they were concerned about me and they did their best to share the burden, there's no doubt about that.

Explains that he felt that the people from the Alzheimer's Society were helpful because they understood more about dementia, and were more friendly, than the psychiatric nurses.

Explains that he felt that the people from the Alzheimer's Society were helpful because they understood more about dementia, and were more friendly, than the psychiatric nurses.

No, I have, really, apart from the visits being a little bit less frequent than I would have liked I couldn't fault them. Of course when I got in touch with the Alzheimer's, I think what distinguished the people that I saw was the fact that they weren't quite so official or 'officious' perhaps is the word.

There was more constancy about the people that came. And they seemed to have a better understanding of the position, possibly because they were specialising, I suppose the psychiatric nurses would be dealing with all sorts of mental illnesses apart from dementia. Dementia is a vague kind of thing really.

So you know putting them in, into the category of professional advice then I was very pleased with what they did for me you know, not least of which was taking us on a holiday you know together, that was very good.


Felt guilty getting on with his life while his wife approached death.

Felt guilty getting on with his life while his wife approached death.

When she came towards what I've since realised was the end, she stopped eating and drinking. Because I then had these difficult decisions to make and I was obsessed. OK I was still going out to dance because you have to have diversions, if you don't have diversions you would go mad yourself.

But every day I had to run over the decision about whether we were doing the right thing. Whether, and every day I said to myself and I used to say when I got to the home' 'Have you tried her with food today? How did she get on?' 'She had a yoghurt and half a spoonful of custard,' and so on, that was a tremendous turning point because I, the guilt then was different. Am I condemning her to die by taking this attitude you know. And then having to reconcile the guilt with the fact that when I was out dancing I was really enjoying myself. Obviously I couldn't inflict that on other people. I don't know whether that requires a split personality but I suppose I really had one.

But of course, and of course the interesting thing about the final turning point which of course on her death was that just, after the initial emotional impact was the tremendous relief that it brought you know. Again, something that made you feel slightly guilty but you had to reconcile your feeling of guilt, you had to balance it with the fact that it was so much better for her. She'd stopped suffering, she'd gone peacefully, she'd gone without pain, you'd done your best so really you didn't really need to feel all that guilty.

And I must say that although that I wouldn't have believed it at the time and perhaps for some two or three months afterwards, I must say that I now find myself talking to my wife, or to her photograph as though she were still here. But talking without any inhibitions at all, without any feelings of guilt. So that was tremendous turning point really. What ever has happened to her since she died it's certainly made a big difference from my point of view. And we're still, we're still good mates.