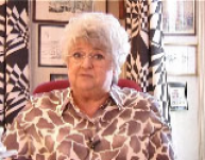 Age at interview: 70
Age at diagnosis: 70
Brief Outline: Diagnosed with breast cancer in 2001, had a bilateral mastectomy and was given Tamoxifen.

Explains why, aged 70, she saw her cancer diagnosis more as a nuisance than a disaster.

Explains why, aged 70, she saw her cancer diagnosis more as a nuisance than a disaster.

View topic summary
SHOW TEXT VERSION
PRINT TRANSCRIPT
So when he said' "Yes, I'm sorry I'm afraid it is a cancer," I thought' "Ugh." It is a slight you know.

Not because it was cancer.

I will not join in this great myth that it's the most terrible diagnosis in the world, it is not, believe me there are some nastier illnesses than cancer. I wouldn't like to have Parkinson's. I don't want to have a stroke. I don't want to have multiple sclerosis. Cancer at 70, I'm 70 is like you know not such a terrible thing. It's a slow growing thing, it's easier to treat.

But I wasn't, it wasn't, I wasn't overwhelmed.

I knew enough about the disease to know that I was not a candidate for immediate death and I don't think a diagnosis of cancer is a death sentence anyway. I think this is one of the great myths. I've known too many people have done very, very well and are doing very, well.

Explains why she opted to have a bilateral mastectomy.

Explains why she opted to have a bilateral mastectomy.

View topic summary
SHOW TEXT VERSION
PRINT TRANSCRIPT
Anyway it was arranged that I should have surgery as quickly as possible and I opted to have both breasts removed.

This was the one that was first affected.

But I thought, after I'd had a bone and liver scan and discovered that I was clear, the bone scan and the liver scan, I had no secondaries.

So I talked to my consultant and he agreed that if I wanted the bilateral job done he would do that because a) I was concerned about the weight on my back and my posture and b) maybe it was a). I'm not sure. I wouldn't have a moment's peace of mind until the second breast. You know I'd always be afraid it was coming back. In the event I was right.

I didn't have a cancer in this breast but early, well they called it a sclerosis, early cell changes. So it's no bad thing. It's made the development of a real, you know, tidying up my appearance much easier.

Explains that she fitted into several risk factor categories.

Explains that she fitted into several risk factor categories.

Let's go back, family history' my sister died of breast cancer, I had a paternal aunt who did and my mother, we were never quite sure what she died of but it was certainty gynaecological cancer, ovarian possibly, but you know it was all a bit mysterious. So that's the family history.

I had my babies latish, my first baby was born when I was almost 29 which doesn't sound late today but believe me it's later than it should be.

I couldn't breast feed them, at least the first one I couldn't, because she was a little prem, and I couldn't get my hands on her in time.

And out of some misguided sense of what is better for, I wanted to treat all the children the same so I didn't breast feed the boys either.

I had thyrotoxicosis when I was a girl. I had my thyroid removed. And that for some unknown, I don't know the details of it, but that is a predisposing factor, a bit.

And I'd been on HRT for many, many, many years. I'd done that as a gamble. I knew perfectly that HRT does have a slightly, and I mean slightly, increased risk of breast cancer. But I also knew that it did protect more slightly again coronary thrombosis and cerebral haemorrhage. And I thought right I would, on balance, I would rather cope with breast cancer than cope with a stroke or a heart attack.

Explains why losing her breasts and looking at her scars did not cause her any anxieties.

Explains why losing her breasts and looking at her scars did not cause her any anxieties.

View topic summary
SHOW TEXT VERSION
PRINT TRANSCRIPT
I had no difficulties with my scars. I'm an operating theatre sister. I'm not typical you see. A scar is a scar, you know, that didn't worry me in the least.

I chose to have both breasts off and if you're asking was I grieving over the loss of my breasts frankly, no. I'd had them for the best part of my whole 70, 60 years. They'd been pretty young things at one time just as I was. But they've served their purpose. I'm more than a pair of boobs on legs for heavens sake.

I've never had a great big thing about it. I really couldn't care less frankly. The only reason I wear falsies, I wouldn't bother. But the only reason I do is because clothes are cut that way and your clothes look really peculiar if you don't.

But otherwise I just wouldn't bother, I truly wouldn't.

Explains that she prefers evidence based medicine to complementary approaches.

Explains that she prefers evidence based medicine to complementary approaches.

View topic summary
SHOW TEXT VERSION
PRINT TRANSCRIPT
I'm a pragmatist. I like evidence-based practice and I've never yet seen any evidence that proves that these sort of 'complementary therapies', (I think of them in quotes) do anything.

They might make you feel, some people, feel more comfortable. They get your endorphins running. You know your brain can produce its own opiates that give your mood a lift and make you feel good.

Massage will produce that, eating a good dinner would produce it, sex produces it. Oh, endorphins are produced by a lot of activities.

But I have other ways, you know I go for a swim. I swim every morning, I do a kilometre, I'm still doing that. Started that within, as soon as the wound had healed, within a month. He wouldn't let me go sooner. But that's the only thing I would do.

But I wouldn't call that complementary therapy I'd call that just doing things to make you feel good.So no, I'm too pragmatic I'm afraid.
Previous Page
Next Page