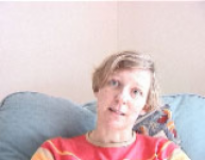 Age at interview: 42
Age at diagnosis: 32
Brief Outline: Diagnosed with breast cancer in 1991. Had lumpectomy and was given radiotherapy and chemotherapy.

Describes how some people avoided her because they didn't know how to talk about her illness with...

Describes how some people avoided her because they didn't know how to talk about her illness with...

View topic summary
SHOW TEXT VERSION
PRINT TRANSCRIPT
And people's reactions to it were, cancer sort of' "Ughhh!", you know.

Oh, I say, the oncologist didn't. And, sometimes I felt some people avoided me because they didn't know what to say. So that was, that was hard to bear really I think.

I mean some people were great but some people, and I mean it wasn't that people didn't want to help, they just didn't know what to say. And so they just avoided it. And avoided me, which was difficult.

So I think it is more difficult when you're younger, probably. And certainly people's reactions to it are probably more marked.

Explains her joy at becoming pregnant after having breast cancer and her positive feelings about...

Explains her joy at becoming pregnant after having breast cancer and her positive feelings about...

View topic summary
SHOW TEXT VERSION
PRINT TRANSCRIPT
But when I had the chemotherapy I was warned that I might not be able to have children, which did upset me. Even if, I always wanted to know I had the choice.

But when they said' "Yes you probably won't be able to have children and your menopause might start," and it did seem that my menopause was starting at one point.

And then two years ago, no three years ago now, entirely unexpectedly, I became pregnant. And I had a very good pregnancy and very good birth and I've now got a lovely little two year old who's absolutely gorgeous and absolutely healthy, touch wood.

And I love him to bits. And [coughs] excuse me, and I, I did manage to feed him, even though I was only able to feed him from one breast.

And he's wonderful. And I feel very happy and positive. Yeah life is good, definitely.

And it is now nearly ten years since I was diagnosed, and of course the longer away from the diagnosis that you're free the better.

Explains that as she has always had a healthy diet she did not need to make any changes to it.

Explains that as she has always had a healthy diet she did not need to make any changes to it.

View topic summary
SHOW TEXT VERSION
PRINT TRANSCRIPT
I mean I always had and continue to have a fairly healthy diet, I always ate lots of fruit and vegetables and so on, and I still do. And I like fruit and vegetables. I didn't eat much meat. I was almost a vegetarian for a number of years before I was diagnosed and I continue with that diet.

I like good food and I've never eaten, you know, lots of chips or anything like that. So I've made no change to my life in that way.

I've always been a bit interested in things like homeopathy but I didn't adopt any of those ideas when I was being treated. I just went along with the medical treatment.

I felt that I was in good hands and I'm sure I was, so I didn't feel the need.
Previous Page
Next Page