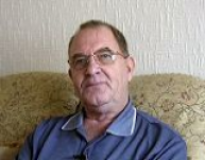 Age at interview: 65
Brief Outline: He was invited to be screened for bowel cancer in 2006. The result of the Faecal Occult Blood (FOB) test was abnormal, so he had a colonoscopy, during which one benign polyp was removed.
Background: A white British man, a part time care assistant, married with 2 children.

He was invited to be screened for bowel cancer in November 2006. The result of the Faecal Occult Blood (FOB) test was abnormal, so he repeated the test. The latter was also abnormal. Then he was invited to have a colonoscopy, during which one benign polyp was removed. There was no evidence of any cancer. He will repeat the test in two years time.

He decided to be screened when he was still young enough to fight off disease if it were...

Show in context
SHOW TEXT VERSION
PRINT TRANSCRIPT
Did you have to think for a while before deciding whether or not to do it or was it quite clear to you that it was a good idea?

No, no I thought it was a good idea.

Did you discuss it with anybody?

So your main decision to take part was that if there was anything wrong you wanted to be in a good state to fight it now?

That's right you know instead of leaving it, I mean well if it gets worse, if you've got something inside you that's getting worse it's, there's no coming back is there after a few years, it could get worse and you could do nothing about it so.

The leaflet explained that things could go wrong during colonoscopy and that the doctor could...

Show in context
SHOW TEXT VERSION
PRINT TRANSCRIPT
I think you had an information booklet at the same time.

Can you remember anything about it?

They just showed you diagrams of the, of the bowel and what would go on like you know with, if you'd got any problems in your bowel, it told you all about that. And they said what a, you know a good idea to have it done and have it checked out. So I did.

Did it tell you anything about any disadvantages there might be in having it done?

Yes it did, it told you about things that could go wrong you know and they could puncture your what's it inside your.

The bowel and you know you could be in some trouble then. But I mean I think they could do it all alright in my hospital so yeah.

So that didn't worry you?

No it didn't. I thought they was quite capable of doing it without injuring your inside anyhow so I wasn't really worried about it at all.

No I thought it was good, very much information, information in the booklet it was very good.

He was worried because at times he was constipated. Having the Freephone help number reassured him.

What did you think about that?

Did that make you wonder whether or not to try?

Well I didn't bother about that; I thought well if it takes longer than fourteen days I shall have to get in touch with them and do something about it.

Talk to someone who knows something about it [laughs].

He went to see the nurse at the hospital. She told him that the polyp removed during the...

Show in context
SHOW TEXT VERSION
PRINT TRANSCRIPT
What were you feeling at that time when you were actually waiting to find out if it was alright or not?

I don't worry about things like that, I don't bother.

You're not a worrier.

And then how did you get the results?

Well they sent me another letter from the clinic and asked me to go and see the nurse at the clinic. And I went and she said, 'We've had your results of your polyp what they took out.' I said, 'Yes.' And they said it isn't cancerous so it's a good thing.

And they said, 'Well we'll see you in a couple of years time,' so.