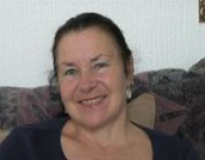 Age at interview: 57
Brief Outline: Invited to be screened for bowel cancer three times, between 2000 and 2005. The result of the Faecal Occult Blood (FOB) test has been normal each time.
Background: A white English woman, a senior school supervisor, married, with 2 children.

She thought the sample might smell, and kept the test kit in a plastic box.

She thought the sample might smell, and kept the test kit in a plastic box.

View topic summary
SHOW TEXT VERSION
EMBED CODE
PRINT TRANSCRIPT
For a start I had to think about did I want to do it, because I was concerned, do they have to have it done right away? But then of course I read about it again and I thought, 'Well I've got fourteen days so it doesn't matter.' But, but yes, I did mine possibly over a matter of about a week, mine took about a week to do it.

What was your biggest concern, were you worried about storing it?

I was worried about storing it, I was thinking well if I did one say Monday and I didn't go again till Wednesday or Thursday where would I keep it, is it going to smell? And then I just, I just kept it in a little plastic box personally, I put it in a plastic box and kept it in the bathroom until I did it, till I did the three and I was able to post them off.

At first she thought that screening might involve a film.

At first she thought that screening might involve a film.

View topic summary
SHOW TEXT VERSION
EMBED CODE
PRINT TRANSCRIPT
Your first thought on screening is, 'Is it going to be on film?' You think of a screen you think of a big film screen. You don't think of it as being sent away. You think somebody is going to come and screen you, your first thought, if you weren't, you know if you hadn't read it properly, if you just read it in the paper that, 'Oh you're doing studies for bowel screening' you think, surely people aren't going to come and screen me and watch me [laughs]. And then you think, 'No, don't be so daft, course they're not'. But for some people that might be, what they might be thinking, that might put them off.

A really interesting point. And now what's your understanding of screening?

Well my understanding of it now is you just get your kit and away you go.

Wondered why she had been 'selected' for screening.

Wondered why she had been 'selected' for screening.

View topic summary
SHOW TEXT VERSION
EMBED CODE
PRINT TRANSCRIPT
Yes my main thought was has my GP recommended me for some reason, is there something wrong with me that my GPs recommended me.

Or because over the past years I've had to have a lot of laxatives, I did wonder that, is it because I've had to have a lot of laxatives that they're thinking the use of laxatives has done something to me and there be the possibility, I might have be, have bowel cancer in the future. I didn't know that until I sat down and thought about it seriously and I talked it over with my husband and we decided no, it's everybody in this area who had been on the screening programme.

So all those things were going through your mind when you had the invitation to be screened?

These things did go through my mind when I had the invitation yes. Because you do wonder why, why me.

She sighed with relief when she read that her result was normal.

She sighed with relief when she read that her result was normal.

View topic summary
SHOW TEXT VERSION
EMBED CODE
PRINT TRANSCRIPT
Okay and then can you describe how you felt when you got the letter saying everything was alright?

When the letter came back to say everything was alright I felt relieved and I thought well all that fuss was for nothing, you know I made all, in my mind I was making all this fuss about having it done. I must admit I did worry, until that envelope came back it is on the back of your mind, is everything okay, because I mean you, you can't actually see the blood in your motion, until it's under that microscope you wouldn't know. You don't look at it and see the blood in, really see the blood in your motions. I'm not actually sure how they do it, they must have some way of doing it. But they, they know. And but once that letter comes through the door and it tell you you're okay you sort of sigh of relief.

She was impressed by the screening programme but felt a bit embarrassed about taking part.

She was impressed by the screening programme but felt a bit embarrassed about taking part.

I was part of the initial pilot study.

Did you read much about it in the newspapers or did you hear about it on the radio at all at that time?

No I didn't. The first I heard about it actually was when it came, when the letter came through the door. I didn't realise they was doing it in this area. But to be, to be part of it was a, was a big thing really. For this area I was, I was quite impressed by, by being asked actually to take part in it. Because, well as I've said before unless you do you wouldn't know, you just would not know.

Did you discuss any of this with anybody else apart from your husband, did you talk to your GP or anyone like that about it?

No I didn't speak to my GP no, in fact I don't think I spoke to anybody about it, only my husband. I did feel a little bit embarrassed about having it, about doing it so I didn't actually mention it to anybody. It's only afterwards and I thought, well what I am feeling embarrassed about it's a normal thing, everybody goes to the toilet.

Was happy with the amount of information in the booklet. Thought that more information would have...

Was happy with the amount of information in the booklet. Thought that more information would have...

View topic summary
SHOW TEXT VERSION
EMBED CODE
PRINT TRANSCRIPT
It's quite a long time ago but do you remember the information booklet that came with the invitation to be screened?

Yes, there is a booklet comes with it explaining everything that would happen.

What did you think of the information that came with it?

It was very good actually, it was you know quite good, it was really good, telling me everything about bowel cancer really.

I think in the information sheet it gives you quite a lot of detail about what might happen if they found you had an abnormal result, I think it mentions that you might be offered a colonoscopy.

And I think it goes into a bit of detail about that and even about the possible tiny risk there might be of having a colonoscopy. Was that about the right amount of information or would you have liked less or more at that stage, right back at the beginning?

I don't think I would have liked more, it would've frightened me if I'd have had more information but you know to say that you would go in for a colonoscopy and you would told that would, personally for me that would be about the right amount of information I would want at that time. And then if it was anything more the doctors would inform me then, once you'd had your colonoscopy.

So you think you had about the right amount, the information was about right?

Yes I do, I do the information was about right.

The information leaflets helped her decide whether or not to be screened.

The information leaflets helped her decide whether or not to be screened.

View topic summary
SHOW TEXT VERSION
EMBED CODE
PRINT TRANSCRIPT
I think when the, when the booklet [with the information] came through, that actually made up my mind really. If I hadn't of thought about it before once I'd read that booklet, after reading it I would think, yes, after reading this information I would definitely want to do it.

And so the information that you read in the booklet helped you decide to take part?

Yes it certainly did, yes the information did just make me decide to take part in the screening.

Did you have anybody with bowel cancer in the family?

No, I didn't have anybody with bowel cancer in the family.

Or did you know any friends who'd got bowel cancer?

No, I'd heard about, well yes actually I had heard about people who had had bowel cancer.

Mm, but again it was the information that really made you decide?

It was the information that made me decide to do it.