Bereavement due to traumatic death 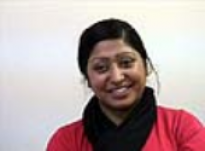 Age at interview: 28
Brief Outline: In 1993 Shazia's friend was shot by her friend's father because of 'izzat' and honour. Shazia, then aged 13, was devastated. She has found help through counselling and by supporting others in similar situations.
Background: Shazia is a Team leader (Karma Nirvana). Ethnic background/nationality: British Pakistani.

One day in 1993, when Shazia was 13 years old, the teacher told Shazia and her two friends that they could leave school at lunch time. It was a special day, ‘record of achievement’ day. The girls parents did not know that the girls had a half-day holiday and thought they were at school all day. Instead of going straight home the three girls went to the park.

While the girls were sitting in the park a man who knew Shazia’s friend saw her, and told her father that she was not in school. Shazia’s friend’s father came to the park and dragged her home. There was an argument in the house and he shot his daughter, her mother and her sister. Shazia believes that he shot her friend because of “izzat” and honour. He may have believed that playing truant brought dishonour on the family. He was a Muslim, and was part of the committee at the mosque, so perhaps felt that any dishonour for the family could not be tolerated. He then shot himself.
Shazia was devastated by the death of her best friend. She was not allowed to go to the funeral so did not have a chance to say goodbye. She was only 13 years old at the time and needed love and support but did not receive help from her parents or professional counselling. Years later she has received support and counselling from a trusted colleague, who is also a trained counsellor.
Now Shazia takes every opportunity to talk about her friend’s death to try to prevent other “honour” killings or abuse. She finds comfort by helping others who are in a similar situation, girls abused by their own families because of conduct they think might bring dishonour on the family.
Shazia was interviewed in 2008

Shazia recalls what she saw from the street and her feelings of horror and disbelief when she...

Shazia recalls what she saw from the street and her feelings of horror and disbelief when she...

View topic summary
SHOW TEXT VERSION
PRINT TRANSCRIPT
So we made our way, started heading back home and in order for me to get to my house I would have to walk up my best friend’s street to go to my street, so I couldn’t get home. And the whole street was cornered off and all I could see was police talking through a microphone saying. “Please surrender your weapon and come outside.” And we waited and waited and waited and her father... went to shoot my friend, and her mother tried to stop the argument and tried to stop the [sigh] all the noise and everything and she, she got caught up in the cross fire and she got shot by her husband. The other daughter, my best friend’s sister, she was critical and died later on in hospital. My best friend was shot… and then he shot himself. So a whole family literally…
Where you outside the house when this was happening?
We were outside the property at the end of the street where the street was cornered off by the police. And… I remember very late that evening, I could not believe that she wasn’t here anymore, I couldn’t believe that a couple of hours ago I was sitting in the park with her and we were talking about all the things that we wanted to do later on in life. For example going to college, going to university and the kind of things that we wanted to do in life and I could not believe that she had been taken away, her life had been taken away for something as trivial as truanting school. And… I quite bravely said, very late that evening when the barriers were removed at the house that I wanted to go into the property. And I just had to see for myself what had happened in that house; in order for me to accept that she wasn’t there. And I remember going home and we used to always lend clothes to each other and borrow each others cardigans and jumpers, and I had this little black cardigan, which was her cardigan, and I remember never taking that cardigan off and always wearing it with every clothes that I was wearing and I was convinced it would go with every outfit that I used to wear [laughs] and yeh I couldn’t understand that no one was making a fuss about this. Couldn’t understand why no one was questioning why she was murdered and how she was murdered. I remember the next day seeing it on the front page of the newspapers but no one in the community talking about it and just, just going along with like it was just a normal death, and it wasn’t. She had been killed doing something as trivial as truanting school when her father had killed her, killed her sister, killed her mother and killed himself. No one talked about “honour”, no one talked about “izzat”, which is honour, no one talked about it was wrong, no one said anything. I wasn’t allowed to go to the funeral.
Did your parents go?
My parents went but I never had the chance to say bye to her.
Did your parents discuss why this happened?
Not in front of me, all my parents said to me was, “She was murdered for doing something wrong; she had brought shame on the family”. And I couldn’t understand how she had brought shame on the family for doing something that every child, I believe, must do in their lifetime.

Shazia gives talks about her friend's death, in order to prevent other violent crime committed in...

Shazia gives talks about her friend's death, in order to prevent other violent crime committed in...

View topic summary
SHOW TEXT VERSION
PRINT TRANSCRIPT
How have your feelings changed about it over the years?
Over the years I’ve become, I think by sharing her [my friend’s] experiences, by getting every platform, I mean, I speak at events at least five to eight events a month and every event I speak at I open up by speaking about my friend. I think that’s helped, I think that’s helped me amazingly in order to move on to think to myself ‘I’ve carried this all of my life with me for such a long time, but now I’m using this to help other people and giving something back. And I know she’s watching me, and I know that she’d be grateful of me using her experience to help the people’. I can say that hand on heart; I think that’s helped me as I’ve moved on. I’ve been doing that for the last four years.
I think a lot more people are talking about it today, I think… a lot of people are understanding how “honour” impacts on an Asian woman’s life. How it’s a daughter’s duty to carry that family honour, I think people are talking more, wanting to learn about they could prevent honour-based violence which can lead to an honour killing. I think police, social services, education, I think all statutory organisations, health, are willing to learn, willing to understand the culture and traditions. And also to understand that it’s not a part of anyone’s religion, because all religions are built on love and compassion. Whether that’s Islam, Sikh, Christianity, all religions are built on love and compassion. But no religion supports any kind of abuse. As a survivor myself of a forced marriage, I can say, “I’ve used my religion to empower me since I’ve left home”, and to understand that actually my religion doesn’t support this. My parents said this to me, and they said it was part of my religion, well actually it’s not.

Shazia wants professionals to raise awareness about honour based violence and honour based...

Shazia wants professionals to raise awareness about honour based violence and honour based...

View topic summary
SHOW TEXT VERSION
PRINT TRANSCRIPT
Have you got any message for professionals or policy makers?
I would… I would say to professionals to please, please raise the awareness and issues around honour based violence and honour killings, please do not think it’s part of culture, tradition, to suffer any abuse, I know it’s not part of my culture or tradition to be abused. Please talk about these issues as they’re real today and they’re happening in the UK. We hear about more and more honour killings in the UK, we hear that we have 10 to 15 a year in the UK, and to please use this opportunity to raise the awareness on honour killings and honour based violence to help other victims. And don’t be frightened to deal with the issues which relate to ‘honour’ or relate to ‘izzat’ because you may be preventing someone being harmed or seriously killed.

Shazia was bereaved when she was still at school. She said that it is essential to talk to others...

Shazia was bereaved when she was still at school. She said that it is essential to talk to others...

View topic summary
SHOW TEXT VERSION
PRINT TRANSCRIPT
Have you got any message to other people who might bereaved in this way, in a sudden manner like that?
I would say to somebody who is suddenly bereaved that please, please do your best to speak to somebody, somebody close to you, somebody even a teacher, anybody that you can find some comfort in or sharing what you’re feeling and that burden, if there’s any burden. Or anything that you’ve been involved with that person in order for you to receive some support some intense support and not carry this around with you for a number of years, it’s very difficult. I’m sure there is always somebody out there that hear and support and guide you, if you’ve been through something like this. Definite.

Shazia would have liked support from her parents after her friend was shot, but they offered her...

Shazia would have liked support from her parents after her friend was shot, but they offered her...

View topic summary
SHOW TEXT VERSION
PRINT TRANSCRIPT
Did you have any support from anybody at that time?
No.
Just your other friend who you could talk to?
Just the other friend that I could talk to who was with me in the park at the time, yes.
How did she react?
She lived next door to our friend who had passed away. She was heartbroken, she was heartbroken, and but her mother spoke to her about it, her mother said that it was wrong, her mother comforted her, gave her the affection, gave her the love and a listening ear, whereas she was trying to do that for me, my friend, because I didn’t have that.
You had no comfort from your parents?
Not at all, no comfort whatsoever.
Previous Page
Next Page