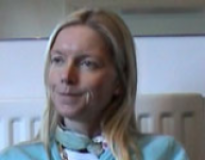 She found out at a scan that her first pregnancy was a blighted ovum (the baby had not survived).

She found out at a scan that her first pregnancy was a blighted ovum (the baby had not survived).

View topic summary
SHOW TEXT VERSION
PRINT TRANSCRIPT
Well, I've always been very keen on scanning, because the first pregnancy I had, I went for a scan at 14 weeks, and they discovered it was a blighted ovum, which means basically there's a womb that is the size of 14 weeks but the fetus has died almost at the chromosome level, so there's sort of nothing in it.

But your whole body is in the process of pregnancy, so I'd had, you know, the morning sickness, the tiredness, every symptom of pregnancy, but yet there was no baby there. So basically after that sort of major shock, complete disappointment and sort of heartbreak, for all my other pregnancies I've been scanned between sort of 7 and 8 weeks, just to make sure, you know, that something has happened.

And also because I feel so sick when I'm pregnant, to go through 14 weeks and there's kind of absolutely nothing is quite hard work. So I've always been quite pro going for scans and having a certain, you know, the information that they've got to give you.

Her experience of finding her first pregnancy had not survived made her nervous about screening...

Her experience of finding her first pregnancy had not survived made her nervous about screening...

View topic summary
SHOW TEXT VERSION
PRINT TRANSCRIPT
And how do you think that first experience has affected the way you think about antenatal screening?

I think it's always made me incredibly nervous before every scan. I mean I've never seen it as a sort of joyful thing. I've always been having my fingers crossed, thinking, you know, 'Please, it's all alright, or there's something there, you know. There's not something wrong'. I mean, I've never sort of taken the family along. It's always been a very sort of medical thing that, you know, I find very stressful, because of that sort of, definitely because of that first experience.

I think sometimes with babies, when you really really want a baby, you  know, you're so nervous that it's not going to work out, that you're sort of always praying and hoping, that each scan is fine. You just don't want that bad news. And I think it's sometimes hard to let go. If you've had a bad experience like that, it's hard to let go of it, and see each pregnancy as an isolated situation and that, you know, it probably won't happen again. But you just sort of have that fear.

Finding at her first 12-week scan that the baby had died was a terrible shock. Her husband was...

Finding at her first 12-week scan that the baby had died was a terrible shock. Her husband was...

View topic summary
SHOW TEXT VERSION
PRINT TRANSCRIPT
And just thinking back to that first scan, what was that experience like, and how was the news communicated to you?

It was a terrible shock, I think, because it was my first pregnancy. I was then very inexperienced. I hadn't even heard of, I'd heard of miscarriage and the sort of regular things that go wrong with sort of early pregnancy. So when the lady who was scanning me asked me if I was sure I was pregnant, I mean I just did not understand what she was saying.

So I mean I thought I was 14 weeks pregnant. I probably could've understood if she'd said the baby's died or there's something wrong with it. But when she asked me if I was sure I was pregnant I just, you know, I just couldn't comprehend what she was saying. And then she showed me a picture of the womb and there was nothing there. It was, I think I was in shock for about a week, I just sort of couldn't understand sort of what had happened.

Did your husband come with you to the scan?

No, he didn't actually. I mean, we've always been, you know, sort of quite independent, and I actually just went with my sister. I didn't, I suppose that's one of the sort of, it was the sort of first example, I didn't see it was like a sort of massive thing. Even though I was definitely nervous, because I thought, you know, it might have died or something, you know. It might have gone wrong.

But I definitely wasn't prepared for what had happened to have happened. And then I called him and, you know, he came along and was then with me until I went home. But I think it was just the emptiness of the whole experience afterwards. You feel sort of numb with kind of disappointment and upset.

And I think because I feel so dreadful in early pregnancy that it completely stops my life, so you feel like you've had - not that it's been wasted - but you know, I can't do anything, I'm just constantly sick, you know, just feel terrible, and you just feel so let down. You just think, 'I've gone through all that for nothing, and I've got to go through it all again if I want to get pregnant again'. So it feels like quite an upheaval to get over that sort of, those feelings.

She had to wait for a repeat 20-week scan in her current pregnancy when problems with the baby's...

She had to wait for a repeat 20-week scan in her current pregnancy when problems with the baby's...

View topic summary
SHOW TEXT VERSION
PRINT TRANSCRIPT
And then I went for my 20 week scan, which I always know is quite a big one, in that they look at every part of the baby's body, and the heart and the kidneys, and the liver and the stomach. And the scan was, seemed to be going fine and then they noticed that the stomach was collapsed. And well, that was quite traumatic, because I didn't understand what a collapsed stomach meant.

I thought maybe that meant it had sort of no stomach. And she scanned the whole baby and she said that everything else seemed absolutely fine, but I'd have to go and wait in the waiting room for 20 minutes, to see if the stomach filled during that 20 minutes. Because obviously they needed to know that the stomach was functioning properly.

And that was very traumatic because, you know, I was sort of given no extra information at that point, so you're sitting for 20 minutes thinking, 'What does this mean? Does it mean that the baby can't eat, has got no digestive system? Or that the stomach isn't going to work, you know? How's the baby going to work if this key element is completely collapsed?'

So then I went back to be rescanned and the stomach was still collapsed. And she said I would have to go and wait, and she'd come out and talk to me. I felt where I had to wait was really quite distressing. It was like a sort of a red room. I mean, she was lovely and dealt with it brilliantly, but waiting in a little sort of red room, which you really felt was like the bad news room, was horrible.

And she came in, and my husband's always incredibly to the point and blunt, and said immediately, 'Does this mean we have to terminate?' And she was very honest and said, 'Absolutely not, but it could be either a), it could either be [reading from notes], there's a possibility it was oesophageal stenosis or tracheo-oesophageal fistula', which are two conditions which mean that the baby can't swallow properly.

I think what was quite hard was I felt I was given a lot of information about those two conditions, on what could happen, without them definitely knowing that that was it.

She was impressed with the medical care in her current pregnancy, but felt overwhelmed with...

She was impressed with the medical care in her current pregnancy, but felt overwhelmed with...

View topic summary
SHOW TEXT VERSION
PRINT TRANSCRIPT
I think, maybe because I'm not that medically minded, I would have thought, 'Maybe it's a bit small, hopefully it will have grown in two months.' I'm not the sort of person who would be up on the computer sort of working out, 'What does a small stomach mean?' So I do think I was given quite a lot of information, when there was a 5, they said there was a 5% chance that it was this.

And in my rational moments I was very sort of controlled about it and didn't think about it, but in my irrational moments and emotional moments I sort of panicked. 'What if it is this, you know? A month in hospital with three small children and a tiny baby, and juggling three different schools and my work.' You know, I just, the pressure at times just felt quite a lot.

Did anybody sit down with you before they gave you all this stuff and say, 'How much information would you like?'

No, not for one minute. It was given to me in sort of just bits and pieces, you know. No-one actually said, 'This is the worst case scenario, you know. This is what - I mean, it's very, very unlikely'. They didn't even really say that until this one leading guy drew me a picture and he said, 'With fingers crossed, smile, 95% I think it's going to be fine'.

And at that moment I did feel a slight sense of relief, but until then, you know, I felt I was given a lot of information while you're lying on the bed being scanned. And you feel a bit like, I did feel a bit like, maybe for some people it was right, but for some people it's determining what situation they're in. Maybe with a first baby, even though it would have been completely traumatic you've got a bit more time to kind of digest it and kind of deal with it.

In the situation that I felt I was in, it was kind of, I was more panicking about how on earth would I cope with a small baby in hospital for a month, three other children. It was like the whole situation made my mind slightly run out of control, and just sort of - and the trauma of your baby having to be taken away immediately.

Looking back over it and your other experiences of screening as well, what would you feel is the best way for health professionals to handle giving people information? Have you come across really good examples where you feel, 'Yes, that was the way I wish it had always been'?

I felt after that day I wished in the end someone had had time - just one person - like 5 minutes to say, 'These are the, this is what might happen, this is what probably won't happen, and this is the probability of it all', but just in quite a sort of calm way.

Rather than sort of 10 different people all saying bits and pieces, and you're coming away and you can't really... But I did feel that they were incredibly thorough and given their schedules, you know, they fitted me in as an emergency and I saw everyone I needed to see in that one day.