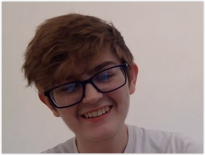 PJ remembers experiencing gender dysphoria as a child and feeling uncomfortable with changes in his body throughout puberty. Meeting a friend who was trans opened his eyes to trans identities and as he explored more, he realised he was male and wanted to transition.

Going to see the GP about being referred to the NHS gender identity clinic was scary because PJ was unsure how the GP would react, but his GP was supportive and understanding.

PJ has been on the waiting list for the gender identity clinic for a long time which has had a negative impact on his mental health as he is coping with gender dysphoria on a daily basis. Several things have helped. Being able to make some changes towards being masculine and the times when he passes as male has lifted up PJ’s feelings of negativity. Surrounding himself with a good support network who use his correct name and pronouns has felt very validating.

PJ had mixed reactions from his family about wanting to transition to male but as time has gone by, they have become more supportive.

He would like to see more psychological support available within the community for trans young people to help them through their transition and more available and affordable treatment to help people who cannot pay for private trans healthcare. PJ would like health professionals to have better knowledge of trans healthcare so they can support their trans patient at that first appointment.

PJ believes everyone’s journey is their own and he disagrees with the inference that you’re not trans enough if you don’t have surgeries. He advises young trans people to do their research before they make any decisions and to know they don’t have to rush into medical treatment until they are ready.

A year on from his interview, PJ has finally been seen by the gender identity clinic and prescribed testosterone. This has improved his gender dysphoria and overall mental health.

PJ talks about his experience of coming out at university and the support provided by changing details and the wellbeing service.

PJ talks about his experience of coming out at university and the support provided by changing details and the wellbeing service.

I changed my name with them literally a few days before I came to Uni, because that’s when I got my deed poll, and they were on it like that, they were really quick with it. I haven’t, other than in a messed up email address that I got, I haven’t had a problem with seeing my dead name anywhere, so they were really good in terms of changing details and that. The wellbeing service have been also really helpful with LGBT issues, cos they’re very inclusive and very knowledgeable about that stuff, and they hand out really good like helplines, like trans helplines and that. Other senses, I got misgendered by a lecturer once, but I mean I’m pretty, I mean like well you can’t really do anything about that, but overall it’s been good.

When I get misgendered, it’s more embarrassing than anything, so to save the embarrassment I just kind of shrug it off and give them a weird look, like ‘Are you crazy?’ or something like that. But the thing is she was talking to another one of my lecturers at the time, when she said it, and that’s, it kind of gave more embarrassment because then he was like, he looked at me and he was like this [lowers head and sighs] like, so it was, it was just really embarrassing more than anything, so I didn’t want to get more embarrassed so I just left it.

PJ says he’s known since he was very young that he doesn’t want kids in the future.

PJ says he’s known since he was very young that he doesn’t want kids in the future.

I’ve known since I was very young, before I was trans, that I never wanted to carry my own children. I did not want; I did not want to carry my own children. So that’s always been there, but then as I’ve grown up, I realise I just, I, I don’t want kids. It’s just a general thing, I don’t think it’s really trans related but yeah so, I don’t want kids in the future.