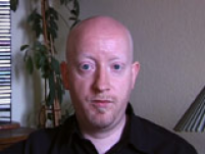 Recalls that the ultrasound raised suspicion of cancer and was used to check his testes and abdomen.

Recalls that the ultrasound raised suspicion of cancer and was used to check his testes and abdomen.

View topic summary
SHOW TEXT VERSION
PRINT TRANSCRIPT
There was a fairly matter of fact approach that the hospital took. The, the ultrasound operator was a male doctor, I don't know whether that was really, his manner was very you know confident and he was very comfortable in what he was doing. I felt at ease with him, so I don't know whether necessarily his gender was you know relevant but his manner was very good at putting me at ease. He applied the jell to my genital area and started the scan, that was quite anx., that made me quite anxious you know, the various pauses and that, where he would appear to stop the scan and sort of almost take freeze-frames. So every time you did that your heart would sink thinking 'What's he detected there?'

On concluding the scan of that area he said that there was definitely something there on the testicle, his suspicion was very strongly that it would be testicular cancer and that the likelihood of surgery was very, very high. So on that basis he was, his suspicions were strong enough to suggest to me that he would then want to go on and check my abdomen, and arrange for a series of chest x-rays that day. At that point I was really quite concerned. I wasn't really prepared for the likelihood of a spread of cancers from, from that area to be so, you know, I thought we would probably go through various other stages of investigation before you know the likelihood of secondary tumours would have been raised with me.

Says that he almost felt he was to blame for upsetting the family by giving them bad news.

Says that he almost felt he was to blame for upsetting the family by giving them bad news.

View topic summary
SHOW TEXT VERSION
PRINT TRANSCRIPT
The most difficult part emotionally I found actually was telling family and friends. It was quite peculiar and I mean, very sort of enlightening in many ways in that I was more upset by the response of other people to telling them that I was sick, than actually you know for myself. It was almost that you know, because people were upset by telling them, that you were in some way to blame and, you know. And that made it difficult telling people and that made it difficult going through it time and time again with different people as you wanted to tell.

So it had come pretty much like a bolt from the blue, for most of my family and friends. And you know they were very concerned and people wanted to come up and stay with me and visit, and wanted to check I was OK. And you know although I was genuinely very deeply touched by their concern, in many ways I still felt that for me it was easier for me to try and keep the routine of my normal life going. And, and deal with the disease on my own terms which was you know to, to, I don't know, I don't feel I was running away from it, I don't feel I was repressing anything.

Recalls what it is like to have a general anaesthetic.

Recalls what it is like to have a general anaesthetic.

View topic summary
SHOW TEXT VERSION
PRINT TRANSCRIPT
So after a, sort of a few hours of sitting about in the waiting area I was taken through for my surgery. It was quite bizarre because I'd never had a general anaesthetic before; I was quite fascinated to see what it would feel like. And it was quite peculiar, I was taken to the sort of preoperative area, spoke to the anaesthetist, we discussed you know allergies, that sort of thing.

They, they put a drip in my hand and then took me through to the operating theatre. He was then discussing with me what he was gonna do. He, he injected the anaesthetic into my, into the drip and said 'Just you know, breathe normally,' and I could feel, I could actually feel the anaesthetic actually, it was almost like I was inhaling it, I could feel it in my lungs almost. And then there was just ' You know, lights out.

So I came to some time later, to be honest I'm not entirely sure; I was still quite groggy from the anaesthetic, to be offered tea and toast from the, from one of the nurses. I thought that's a great swap one testicle for some tea and toast! The urologist you know came to see me in the post operative area and said the operation had gone very well, you know she was very pleased with it, with how it had gone and that was quite nice because you know it was nice to see that person so soon after the operation and you know and get that, even just that small nugget of reassurance, just to sort of see you through that initial period after the operation.

View topic summary
HIDE TEXT
PRINT TRANSCRIPT
Yes, its January 2002, so its, let me think nearly four months or more, just over four months since I discovered the lump or what turned out to be the tumour and what's it, three, three months after surgery I'm back to my full fitness and full mobility. And I'm started the course of radiotherapy as I said, and I've had four sessions this weeks, its gonna take ten sessions, every day for two weeks with the weekends off. The radiotherapy is actually fairly straightforward you know, I go in just after nine in the morning, I've been seen fairly promptly so far. Go in, bare my sort of lower abdomen so that they can see the targets that, where, I had applied at the planning session. And then it's a matter of lying on the bench as they line up the targets, then all the radiologists, sorry radiographers scurry away, sirens go off, they obviously hid in some bunker as, as the machine cranks up and there's a sort of buzzing noise for about ninety seconds and then they turn the machine round and they do you both sides, and that takes about twenty minutes, sort of in and out, so, so far so good.

Explains why he wasn't able to have surveillance even though that's what he wanted.

Explains why he wasn't able to have surveillance even though that's what he wanted.

View topic summary
SHOW TEXT VERSION
PRINT TRANSCRIPT
We discussed what the next steps were in my treatment after the surgery with the knowledge that they'd been able to gather from the histology. At that point the urologist said she could offer me two alternatives for treatment. One would be a short course of prophylactic radiotherapy which would be over a short number of weeks of daily treatments, and that would be a sort of preventative course of radiotherapy to try and eradicate any likelihood of further disease developing. Or at that point she said she could offer, I could just go on a very intensive surveillance regime, where they would just keep a very close eye on me and there would be, you know very regular testing of you know x-rays and blood tests and I would imagine CT scans, she didn't really go into that much detail of, of that option. And she said you know that was something for me to think about and, and take a decision on. It further developed that the protocols of the Health Authority where I was receiving my treatment were such that they wouldn't offer a pure surveillance approach to, to you know further treatment and that my only options were to have radiotherapy. The urologist when she was making me aware of that in the phone call, I'm not sure whether she regretted saying it, but suggested that the reasons for that were economic, and that it was easier just to send you in for a short course of radiotherapy and then have a reduced surveillance regime instead of just this very intensive sort of you know, what would appear to be monthly tests.

So at the point, at that point I was actually considering that my preference probably would be for surveillance, I was rather irritated to discover that that wouldn't be an option for me so, and I would actually have to go for the radiotherapy.

Explains that it was important for him to take control and change his life-style.

Explains that it was important for him to take control and change his life-style.

View topic summary
SHOW TEXT VERSION
PRINT TRANSCRIPT
It was also very important I think psychologically for me to look you know at my life style, look at my diet, I'm a single man with a good social life you know, I probably drink more than I possibly should for pure health reasons. So I mean I cut back on that, I cut back on my alcohol consumption. I, I started eating organic food, not with any great, the vague sort of you know idea that it was probably better for you, and there are all sorts of studies that I don't know anything about the validity of in terms of eating an organic diet, or at least eating as healthily as possible you know can be good for you and specifically if you're dealing with a disease like cancer. So it was important for me to take control as much as I could of those elements of my life, the ones I could control, you know my fitness, my diet, I even started taking some vitamin supplements and some sort of zinc supplements. And you know I'm not saying that that's something that's medically proven in any way, but its important for me psychologically to feel that I was actively doing something myself to make myself you know if not better, then at least as best prepared as I possibly could be for, for the treatment that was coming.