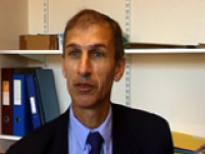 Age at interview: 51
Age at diagnosis: 23
Brief Outline: Testicular cancer diagnosed in 1973; orchidectomy and radiotherapy; developed a bowel obstruction in 1986 (as the result of the radiotherapy), and had to have a temporary ileostomy.
Background: Warehouse Manager; married, 2 adult children.

Suggests that his cancer may have been caused by an accident he had while playing football.

Suggests that his cancer may have been caused by an accident he had while playing football.

View topic summary
SHOW TEXT VERSION
PRINT TRANSCRIPT
Why, why did it happen? There was a feeling that, I'd had an accident about three or four weeks before, playing football, and I actually straddled the goal post. It was painful but I never had any problems. Then I think it was probably six to eight weeks later this lump appeared. It could've been that but nobody ever said it was the cause, that's what caused it.

Describes a long term side effect of radiotherapy and his experience of an ileostomy.

Describes a long term side effect of radiotherapy and his experience of an ileostomy.

View topic summary
SHOW TEXT VERSION
PRINT TRANSCRIPT
And then did you say you had to have more, another operation or

Yes I had another operation. What happened my stomach started to swell up and I couldn't go to the toilet and I kept being sick, this was in 1986. And they couldn't find anything wrong, they couldn't find anything wrong with me. I was in hospital for quite a while having tests, trying to find out what was wrong with me. They couldn't find, I had barium meals and all sorts of things to find out what was blocking my stomach up. And then I had an operation and they found that my bowel was glued together from the radiotherapy treatment and I had quite a bit of that removed.

That was the long-term affect of having had that radiotherapy in 1973?

Yeah, yeah, so in 1986, that's when I went into hospital to have that. I did have a colostomy bag for, from October to the Easter, the following Easter and then they reversed the operation.

Can you tell us a little bit about having the colostomy bag?

Horrible, nasty things. I didn't have a complete colostomy, I had an ileostomy which unfortunately I had all sorts of problems with the bag kept falling off and everything else. I found it unhygienic, er it was probably, and my wife said it was probably one of the worst parts of out marriage. I'd sit there and all I could do was keep touching the bag to see if it was falling off or anything like that.

For those that don't understand what an ileostomy is would you mind explaining?

Well it's, rather than the whole stomach coming out, the bowel coming out of your body it's only part of it, and it's only very small. The problem with mine was that it was so badly bruised that it kept shrinking and going back inside so occasionally the bag did fall off when I was out or something like that. I didn't work obviously for, I went into hospital in October to have the operation and I came out on Christmas Eve, I was in hospital for all that time. I lost a lot of weight, I went down to about 8 stone.

Recalls that he had regular check-up appointments for ten years.

Recalls that he had regular check-up appointments for ten years.

View topic summary
SHOW TEXT VERSION
PRINT TRANSCRIPT
And how many, how often did you have to go for check-ups?

And what did they do when you went to the check-ups?

Nothing very much. An x-ray perhaps and just felt my glands. Blood tests occasionally but that wasn't very long. It was probably two or three minutes, you probably waited two hours to go in and it was probably three or four minutes seeing the doctor and that was it.
Previous Page
Next Page