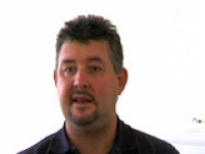 Age at interview: 40
Age at diagnosis: 34
Brief Outline: Testicular cancer (teratoma) diagnosed in 1995; orchidectomy. Secondary tumours in liver, lungs and abdomen; 10 weeks chemotherapy; then a higher dose of chemotherapy and a stem cell transplant; in 1997 recurrence of a secondary tumour in the neck, which was surgically removed.
Background: Retired heating engineer; married, 2 children.

Recalls that some people avoided him because they felt embarrassed.

Recalls that some people avoided him because they felt embarrassed.

View topic summary
SHOW TEXT VERSION
PRINT TRANSCRIPT
So how did other people react to you, not just close friends, did you get any sort of reaction from others?

Yeah it's a strange thing walking down the street sometimes you know you'd see someone coming towards you that you knew and sometimes they'd walk across the other side of the road because they were embarrassed, they didn't know what to say. You know they just, I don't know, they didn't want to talk to you and they didn't want to find out what you were doing you know. Which I found sometimes was a bit strange because I've always talked openly about it you know. I think the more people hear about it and find out about the treatments and that the less people become worried.

Explains that he had further surgery to remove a tumour in his neck, found when he went for a...

Explains that he had further surgery to remove a tumour in his neck, found when he went for a...

View topic summary
SHOW TEXT VERSION
PRINT TRANSCRIPT
And I started your normal five years remission and then unfortunately about the second year into my remission I had a reoccurrence in my neck.

So they, which is you know they're very good, so thorough in the examinations, blood tests and x-rays and scans, they picked it up straight away. I went in for a biopsy at a local hospital and the surgeon removed it all, took it away. I didn't know that at the time, I just thought I was going in for a...

Yeah but he took it all away. I went back for the results, expected to hear that you know may be it had come back, may be it hadn't and he said no, the surgeons had taken it all away anyway, so nothing to worry about there. And now I think I'm in my fourth year, I've still got one in my stomach but it's not doing anything, it's just there so they just like to keep an eye on it.

Explains what it was like to have high doses of chemotherapy, administered via a Hickman line.

Explains what it was like to have high doses of chemotherapy, administered via a Hickman line.

View topic summary
SHOW TEXT VERSION
PRINT TRANSCRIPT
How many weeks of chemotherapy did you have?

Oh I had about, crikey, it must've been about eight, eight weeks, probably a bit longer than that. But the chemo, your body becomes immune to it and it stops working, or it doesn't work as good. So they suggested that I go back to another hospital and have a stem cell transplant. So again you know I just, if that's what's got to be done that has to be done. So I went back to another hospital.

Was that to help your immune system?

Yeah it, they take your own stem cells from you and they store them in like a freeze, freezing place and they take more than they need. And then they really give you a really high dose of chemotherapy and it's bordering on, they virtually kill you I should think because your immune system is nil. And you have to be put in isolation, you're not allowed to be anywhere near any germs. If anyone comes in and out of the room they have to dress up in masks and gowns and hats and everything. And this goes on for about a week and then they reintroduce your stem cells back into you and there's more good, because it's all to do with the blood, more good cells than there are bad cells. And obviously they can overtake the bad cells. And then they count you down from I think it's 15 days, minus 15, 14 and then when you get to zero your immune system is apparently back up and working fine. So we went through that.

Did they give a very high dose of chemotherapy?

Oh I mean normal chemotherapy is quite bad but (laughs) this was, I mean I had all sorts of different problems with mouth ulcers, terrible, I couldn't eat and drink, I had to be you know, have a straw to have these build up drinks, different things. I caught a bug and crikey I can't remember how many tablets I was taking, it must've been about 30 tablets a day at one time. And I had a Hickman line fitted,  different things.

I think you mentioned you had a Hickman line, can you explain for other people what that is?

A Hickman line, it's a small tube that they put in through your chest, they feed it down towards your heart. And it has about five different tubes off the end of it so they can connect different medication and drips to it at the same time.

Did you find that uncomfortable?

No it's fine. Actually you're awake when they put it in you know, they make a small incision in your chest and they just feed it down. You can watch it on the screen actually.

So that's to make the chemotherapy easier to administer?

Asserts that cancer puts the trivial things into perspective.

Asserts that cancer puts the trivial things into perspective.

View topic summary
SHOW TEXT VERSION
PRINT TRANSCRIPT
So what's been the impact of all this on your and your family?

On me, I think it puts the trivial things in perspective. You know I mean before you still you know get up in a morning and I used to go to work and I used to think well I must do an X amount before I come home or I must do this, I must pay the telephone, electric or whatever. But I think at the end of the day if you haven't got your health you haven't got nothing. So worrying about phone bills is not really important, at the end of the day they can cut the phone line off, that's about it really you know. I've done, I do a lot more you know things that I used to do when I was a boy like fishing you know and things like that, activities. I can't play rugby any more. I did try but I've got no stamina.
Previous Page
Next Page