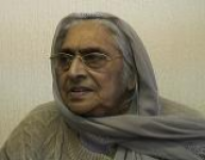 Age at interview: 76
Brief Outline: She had a stroke due to a clot aged 72 which caused left weakness of her leg and arm. Medication' amplodopine, doxazosin, enalapril (blood pressure) furosemide (water), simvastatin, aspirin (cholesterol), fluoxetine (depression).
Background: Is a widow with 4 adult children. She is a housewife. Ethnic background/nationality' Pakistani/English.

A woman who only spoke Punjabi knew her symptoms suggested a stroke but could not tell the doctor...

A woman who only spoke Punjabi knew her symptoms suggested a stroke but could not tell the doctor...

When you didn't understand its stroke what did you think was happening?

I did realise it was stroke, doctors wouldn't believe it they said it's nothing.

Did you tell them its stroke?

I don't know English how could I tell them.

Family, if someone came with me they could have said.

No one went with you?

My little grandson went with me. The doctor told him her blood pressure is high and we'll get her checked at the hospital. At the hospital they took blood twice and said it's nothing then sent me home.

She has been waiting a long time for a bathroom to be put in downstairs. In the mean time she has...

She has been waiting a long time for a bathroom to be put in downstairs. In the mean time she has...

You just want a toilet downstairs is that it?

I'd like a toilet and shower for bathing downstairs I don't need anything else, I just need this and nothing else.

They should have given me toilet bath, so I could shower. Now I've stayed home 6/7 months. They gave me bath towel, with bath towel you can't get rid of the smell not until you use water properly. They used to wash my hair-using bucket, they can't bath me in a bucket. I used to smell that's why I started coming here.

Here they bath you?

Yes they bath me here.