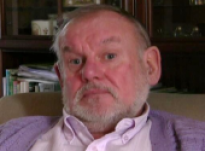 Age at interview: 62
Age at diagnosis: 54
Brief Outline: David experienced two strokes in 2003 in addition to two episodes of pneumonia. The stroke, which affected his mobility, balance, and ability to drive, led to an early retirement from his job as a monitoring officer for the local council.
Background: David is a 62 year old retired monitoring officer. He experienced two strokes in 2003. His ethnic background is White British.

David experienced two strokes two weeks apart in 2003 in addition to two episodes of pneumonia. When he experienced his first stroke he felt lightheaded at work and returned home. He told his wife that he was not feeling well so she called for an ambulance. Hospital tests later confirmed that he had had a stroke. Two weeks later he suffered a second stroke which he described as a near death experience that changed his life completely. The strokes affected his speech, vision, ability to walk, the use of his right arm and caused deafness in one ear. He also suffers from diabetes.
He was in hospital for approximately 4 months (in general hospital and then a specialised stroke unit). His care in a specialised stoke unit was quite favourable in comparison to care in a regular hospital ward (fewer beds in each room, bright modern decor, and extra lighter supports including volunteer visitors). His transition home came as a bit of a shock (very different from the structure of hospital care) as he quickly realised that things that were once simple were now very difficult (e.g., tying shoe laces and making tea). After returning home he received 6-8 weeks of physiotherapy and home support. He does not have any formal services in place now, but does attend a local swim program. He used to attend a Stroke Survivors Unit but ceased participation due to costs and lengthy travel time. He has regular contact with his GP for stroke follow-up and diabetes care.
His stroke led to early retirement from his job as a monitoring officer for the local council, a difficult change because he loved to work. At the same time, he is grateful to have survived the stroke and acknowledged that things could have been worse. David has made considerable progress in his recovery due in large part to his supportive wife and daughter as well as his will and motivation to get better. He has regained his speech, some mobility (i.e., no longer confined to a wheelchair), and continues to make progress. He enjoys cooking, travelling, reading, and spending time outside in his garden. These hobbies help him cope with the changes that were brought on by his stroke.

David describes a near death experience where his family is behind him and a white figure in...

David describes a near death experience where his family is behind him and a white figure in...

If you can go back to the period that you know I was, out with the birds somewhere for about nine days.

During that period I remember very, very distinctly a period of time where I experienced whether you would call it an out of body experience or what. But my experience is that I was in a tunnel and at the far end of tunnel was a figure that was in a white robe and I couldn’t describe the figure because the figure was so far away from me. And I was in this tunnel, my family were behind me, and the figure was actually waving me on and saying, “Come this way, come this way.” And I can remember taking a few strides... to this figure and a few more strides. And I looked behind me and my family were still behind me and this figure looked to be just as far away. And this went on for, I don’t know how long it was. But as I moved forward, the figure, now I never got any closer.
And my family never got any farther, further away from me. And eventually I just said, “Nah I’ve had enough of this.” And I turned around and went back. And...
Back to your family?
Yeah. Yeah.
So I must’ve been very comfortable with them. But yeah. My family have been like a rock to me.

David was told by his doctor that he would never walk again, but in time he has regained some...

David was told by his doctor that he would never walk again, but in time he has regained some...

View topic summary
SHOW TEXT VERSION
PRINT TRANSCRIPT
I can remember when my specialist you know said to me, “It’s getting towards the time where you were leaving us.” And he called me into his office and he said, “How do you tell someone that they’re going to spend the rest of their life in a wheelchair?” And I said, “Well if you’ve any sense you don’t tell them.” And he said, “Well I won’t tell you then.” Because when I was released from the hospital I was in a, in a wheel chair. And I thought, “No, too young to be in a wheelchair for the rest of my life.” And I’ve made an effort to... you know I’ve got lots of aids. But I’ve made an effort to walk and walk as much as I can. But you know I still can’t walk very far. But I certainly you know come out of the wheelchair. So you know just keep trying, keep trying. You know. Just remember that when we were born we none us of could walk. You know we had that to learn didn’t we?
So... You know just learn it again.

David referred to others who have overcome great odds to make important contributions to the...

David referred to others who have overcome great odds to make important contributions to the...

View topic summary
SHOW TEXT VERSION
PRINT TRANSCRIPT
I suppose really if I was being honest with myself, and I wouldn’t I wouldn’t say he’s a hero of mine or he gives me great inspiration but you know when I look at Professor Hawking. And I think of the things that you know, the problems that that guy has.
And I just think to myself, well I don’t know anything about physics or anything like that... or quantum physics or I don’t, all I know is that it deals with microscopic granules and particles and things like that. But I just think to myself now if that guy can do that... then you know I can go into the kitchen and make a cup of tea.
So that’s the way I look at it.
Douglas Bader. He had he was a spitfire pilot and had both his legs through, through his war service, had both of his legs amputated. And told he would never fly again. And he had artificial legs put on and of course he flew again. And I remember meeting him at a function and one of the officers there turned around to me and said, “This is Douglas Bader here.” And I looked up and that guy was walking as well as anybody could. And I thought, you know, well I didn’t think there and then like he’s an inspiration. But looking back then these people probably have subconsciously inspired me.

David talks about the importance on focusing on one thing at a time during the recovery process.

David talks about the importance on focusing on one thing at a time during the recovery process.

View topic summary
SHOW TEXT VERSION
PRINT TRANSCRIPT
So during that learning curve, feeling you mentioned things like frustrated and then wanting to persevere.....after, how did you get from frustrated to being persistent and wanting to persevere, how did that process happen? Or does it constantly go back and forth?
Acceptance I suppose. I think that’s the big word acceptance. And you know one thing that’s that that my specialist said to me, “Don’t expect to do too much at once,” he said, “Just concentrate on one thing at a time.” He said, “And if you’re breathing that’s all the concentration you need and when you feel comfortable about that, concentrate on something else.”And so it’s gone along the line and you just think, “Right well there’s no need to get confused or frustrated about this because after awhile you’ll be able to cope with it and then you move onto something else.”And all this breathing and things like that become second nature. I mean, I do have a lot of problems with breathing. And in fact I’m surprised I haven’t coughed and spluttered even now. But you know, if I try and touch my toes and stuff like that, I tend to choke. So, you know, I do have a lot of medical problems that prevent me from doing a lot of things. But yeah, generally it’s .... pretty good. Now I really do enjoy life.
Previous Page
Next Page