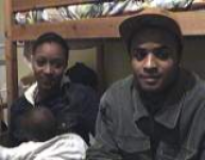 Brief Outline: The parents discovered their baby was a sickle cell carrier as a result of newborn screening. They have since learnt the father is a carrier. Video and audio clips in Portuguese.
Background: Partnered couple with one child aged 9 months. Mother aged 18, student. Father aged 22, security officer. Ethnic background/nationality' both Black Portuguese.

HIDE TEXT
PRINT TRANSCRIPT
This couple arrived in the UK from Portugal when she was already 7 months pregnant. They did not have carrier screening in pregnancy. The baby had newborn screening and was found to be a sickle cell carrier. It was a shock getting the results, and at first they had difficulty understanding what it meant in English. It would have helped to have an interpreter, but eventually they understood the baby was only a carrier and were reassured that he was not ill. The parents were also screened and discovered that the father is a carrier.

They felt very isolated and unsupported when they first arrived in the country and had problems finding accommodation. Thinking there was something wrong with their baby just added to their worries until the results were explained to them. Now they are glad they found out, and they believe parents have a responsibility to be as well informed as possible about the health of their child.

The baby's health is the most important thing. Parents have to act responsibly and inform themselves. [A saude du bebé o mais importante. Os pais tem que actuar com responsabilidade.]

The baby's health is the most important thing. Parents have to act responsibly and inform themselves. [A saude du bebé o mais importante. Os pais tem que actuar com responsabilidade.]

So the last question is' Would you like to share with us something that I haven't asked about yet and do you have any suggestions to other people that might be in the same situation? For example would you suggest to people to do the test during pregnancy?

Mother' Especially during pregnancy it's necessary to have a lot of care and having a lot of information about what you wish to know. Pregnancy is very important and you should do things strictly, eat properly, avoid excess, avoid exercising too hard, and do a lot of exercise, it depends. One should have a lot of care and pay attention to the results of the tests. Yes, that would be good.

So would you would suggest to people to do the tests and to pay more attention to pregnancy?

Father' I think that there are a lot of parents that want to be parents because of the baby. They forget that they are going to have a human being, that is a child, that is a baby.

Mother' You have to take care.

Mother' Of course; and after the baby is born, never let, for example, any news about the baby, he can have this or the other, never let it go, always try to find out more'

Father' In my case I never knew I had this disease, I was never one to go to the hospital and find out.

So you had never heard about this condition?

Mother' Yes I knew about it

Father' We knew about it through other people...

Mother' He did not use to go to the doctor frequently, so he did not get to know about anything.

Yes, but anyway you don't have any symptoms of the disease. You are just a carrier...?

As a carrier you don't feel anything and you don't suffer any symptoms so the majority of people when they have something else to worry about won't go to the doctor. So it's normal. So you had heard about this before...?

Father' Yes, I had heard about it. My brother has that problem. I knew, I knew about how to react to this condition and I knew my brother had that problem, and so I never went to hospital to find out and have tests done.

So you only found out that the baby was a carrier after the heel test, wasn't it? I can well imagine how you must have felt, but can you explain a little bit what your reactions were at the time when you were already having a lot of problems - how was it? Did it make things worse?

Mother' When I heard about it for the first time they used to call it 'sickle cell disorders' and I had no Portuguese interpreter, and it was very difficult to find an interpreter, so it was them speaking in English and me trying to understand. When they said that he had a condition I got very startled, I wanted to know more but it was very difficult to understand everything. And they could not manage to explain properly. I don't know, I got sad and it was difficult for them to explain it to me. They tried to explain and I did not understand, and I was thinking it was something very serious, I did not know what was going to happen to the baby - and every day doing different tests and I got nervous - and I used to cry. 'What is going on?' But no, they said, 'It's going to be all right.' What is strange is that he went to see the result and then they left us alone, didn't they? It wasn't, 'Ah [own name] you have to go to the doctor frequently, you have to do this or that' - no, nothing.

So in the end you understood that he was a carrier, that he did not have the condition?

Mother' Yes, but in the beginning it was difficult. I did not know what it was and I took some time to understand what it was, but I have been doing everything as I should.

Footnote' often people do not realise that being a carrier does not affect your general health and you may have no idea you are a carrier unless you are tested.

She was 7 months pregnant when they arrived in the UK. A stranger helped them find accommodation....

She was 7 months pregnant when they arrived in the UK. A stranger helped them find accommodation....

View topic summary
SHOW TEXT VERSION
EMBED CODE
PRINT TRANSCRIPT
But did you do a test when you got pregnant?

Mother' No. I was 7 months' pregnant when I came to England. No, we only did the test when the baby was born. We stayed in the hospital almost a month, and he (the baby) had blood tests every day, we did not know why. They were always seeing what the problem was. They were constantly doing tests, tests, tests and then, ah, after two months they said they were undecided whether it was a blood disorder, or if it was a kind of anaemia, but they explained more or less what it was.

Did you do the other tests, the tests that one does normally to see if the child has another disease?

Mother' Yes, I have done the tests in Portugal, and I went regularly for doctor's appointments and they did not discover anything. I mean, my food intake was very weak in vitamins and they discovered that I had a bit of anaemia, but it was enough to eat etc. to do the necessary things, and nothing would happen, but I had anaemia during pregnancy. Then, when I came to England 7 months' pregnant, in the beginning , when I wasn't used to the food and the country, my nourishment got worse and worse, and I think my anaemia got worse too. It was very bad when I came here when I was pregnant and I wasn't used to things here, it was very difficult.

It was difficult to get used to the house, to the work...

Mother' I did not like the food, I had a lot of stress.

Life here is not easy.

Mother' Especially in the beginning.

But you were not working at the time, were you?

Mother' No, I was just pregnant.

There are a lot of people that neglect themselves when in situations of stress, don't they?

Mother' Sometimes it was just simply not having enough conditions, wanting to eat this and that and not having any money. I had to eat a lot of vegetables and fruit, this and that, and as I was alone I neglected myself more. I should have been able to cook or to have better conditions, but the fact is that when I came to England I had nowhere to stay. I could not do everything that I wanted.

So when you came to England you did not have a home?

Mother' No. A friend of mine was coming to pick me up at the airport and he did not come. I was left with nothing. We were left with nothing. The first night we spent at a hotel and the rest, in the next three months we stayed at the house of a stranger.

Father' That supported us

Mother' See, it was her brother coming down the road, and he said " Look some Portuguese people traveling" and we - he speaks Portuguese, we then told him what had happened and he let us stay in his house, and then we went to his sister's house, and then when we had better conditions we came here.

Father' We were very lucky. Because we could not even pay the hotel. We even thought that we had paid the hotel another 4 days. We left the hotel and went to buy something to eat and when we arrived we could not see our suitcases.