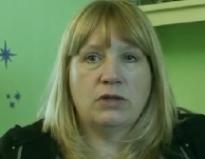 Age at interview: 45
Age at diagnosis: 33
Brief Outline: Tina is a development funding assistant who lives with her long-term partner and has 4 adult children. Ethnic background/Nationality' White British.
Background: Tina was diagnosed 12 years ago. Initially she tried to control diabetes with diet alone, then transferred to metformin. In 2004 she changed to insulin and now takes Levimir at night.

Tina feels she is well understood by her GP and diabetes nurse and that they listen to her ideas.

Tina feels she is well understood by her GP and diabetes nurse and that they listen to her ideas.

View topic summary
SHOW TEXT VERSION
EMBED CODE
PRINT TRANSCRIPT
I was given a whole load of information which was too much to take in, definitely. And also, because I was quite angry about being now 'a diabetic', I felt, when I went to hospital I felt like a bit of a victim. So I actually stopped going for quite a long time. I had a bit of well' Some of the nurses, at one point, said, 'Oh, you know, this is Tina and she thinks she knows it all'. And that was on one visit, and I didn't think I knew it all at all, but I just, I was a bit probably a bit I my, you know my defences were up probably so I didn't, I stopped going.

But then I went to my doctors and my they have, you know, they hold diabetic like surgeries, I suppose, or clinics. And I that was I, that was much better, having more of a one-to-one relationship with a diabetic nurse who I got, you know, got to know so it's a bit better that way. Yeah. And that was so I personally, bought a few books on diabetes and you know, and now of course, you know, I look on the internet and on various sort of you know, because it's much more up-dated isn't it - everything's, you know, the latest whatever they have you know [laughs].

I think that my doctor is very understanding but without being sort of patronising. So I mean she also sometimes she actually asks me what I think should happen - how I think things should go, or you know, not what treatment I should be having, but how, you know, I feel about things - [which] is quite important, because you know you are the person with the problem.

And also my diabetic nurse you know, she very aware that, you know, obviously you know I am a diabetic, but she's very aware that I still work, that I have to fit in my family life, that I have to fit in things that crop up unexpectedly. And so she's very good sort of talking to me about that and giving me advice on how I could deal with different situations, but without again without being patronising you know which is quite nice.
Previous Page
Next Page