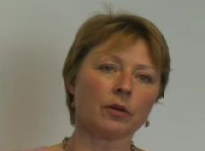 Age at interview: 50
Brief Outline: Rose's menopausal symptoms included hot flushes, headaches, and tiredness. Tried a number of types of HRT but problems with breakthrough bleeding, headaches and heart palpitations led her to manage her symptoms naturally with the help of herbal remedies.
Background: Rose is a personnel manager. She is married with two adult children. She started the menopause at age 43 and had her last period at 45. Ethnic background/nationality' White British.

Rose was brought up to accept her doctors advice without question. She is more confident now and...

Rose was brought up to accept her doctors advice without question. She is more confident now and...

And I know when I started to have the symptoms of the menopause I went to see my GP, when I could no longer manage it myself, and I took their advice and I think that goes back to my working class background in that I’ve been brought up to accept what other people tell me and to deal with it. But actually in hindsight, I shouldn’t have done that, I should have taken more responsibility for my own wellbeing and done that research earlier and asked for that second opinion earlier, asked for that expert advice earlier. But I think going back to my working class roots GPs were Gods and you didn’t think to ever challenge or question their advice to you. And we need to be doing that more because as I get older and I get more educated and I learn more, I realise they’re not Gods, they’re like everybody else they’re doing the best job that they can with the limited amount of information and limited amount of time that they’ve got.

Roses GP encouraged her to use HRT (hormone replacement therapy) even though she had concerns...

Roses GP encouraged her to use HRT (hormone replacement therapy) even though she had concerns...

View topic summary
SHOW TEXT VERSION
EMBED CODE
PRINT TRANSCRIPT
The first time I went I saw a female GP and I think that was quite useful, she put it into perspective for me. I was very afraid that if I went onto HRT I’d be on it for the rest of my life or I’d be on it for 15, 20 years and it’s still to a certain extent an unknown quality and quantity. She said, “You have to deal with the here and now, you have to deal with the 50 mile journey, the busy job, the two children going through their own problems, the husband with M.E.” she said, “Look upon it as a safety plaster to get you through the next two to three years”. She said, “Don’t think upon it that you’ve got to be on it the rest of your life, think upon it as a short term solution to get you through this period in your life”. And I think putting it into perspective like that I was more able then to consider it and give it a go and that’s what I did. And again, after five years, I just thought “Right let’s come off it, let’s see if I can manage” and I have and I am.
Did you have any concerns about the HRT, about going on it in terms of risk?
Yes I did because obviously it was big in the press at the time, the long term effects of it. I was quite concerned particularly six years ago, the year before I started going through the menopause, I had a lump on my breast removed which turned out to be benign. But having had that removed I was very conscious going onto HRT was I encouraging more lumps to come, would the next one be malignant. It was a big big decision for me to make and I was very anti the HRT for that reason. I think I was really concerned that I might get breast cancer from it. I think that was my biggest concern having had this lump removed. But I just got to the point well it was, I couldn’t have functioned without it and it was, well do I risk breast cancer or do I risk losing my job, my home, my family and everything else. So I felt at the end of the day I didn’t really have a choice to be perfectly honest.
Previous Page
Next Page