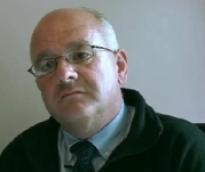 Age at interview: 54
Age at diagnosis: 39
Brief Outline: Malcolm is a sales manager and is married with two adult children aged 26 and 19. Ethnic background/Nationality' White British.
Background: Malcolm's diabetes was diagnosed 15 years ago after a routine eyesight test. Initially his diabetes was controlled by diet but now he takes metformin, gliclazide and pioglitazone.

Malcolm recommends support groups because they can help people feel they are not alone.

Malcolm recommends support groups because they can help people feel they are not alone.

View topic summary
SHOW TEXT VERSION
EMBED CODE
PRINT TRANSCRIPT
And you're obviously very active in the diabetes support. Can you talk in some detail about your experience of being part of a support group?

Yes, well, it started off, there again it was the practice nurse that said, “Oh, what you ought to do, there's Diabetes UK, and you can subscribe to the Balance magazine and join Diabetes UK.” Which I did. I got the magazines and found it quite interesting. And in the magazine it said about local support groups. And I thought, “Well, interesting, I'll go along and see what it's all about.” Went for a couple of years and very interesting. They asked me if I'd like to be on the committee. So I thought, “Yes, that can't do any harm.” So ended up on the committee. Then the chairman retired and they said, “Would you like to become vice-chairman?” And I said, “Well, yes, that'll be all right.” And looked at the chairman, who was then, who, the vice-chairman then became chairman. And unfortunately about six months later he died. So I ended up chairman. Which is not what I wanted at all, but I suppose I do enjoy it.

We organise six events a year, three south of Bristol, three north of Bristol, to try and encourage people to come along. It's not like Alcoholics Anonymous, not that I've ever been to Alcoholics Anonymous, where you've got to stand up and say, “I'm a diabetic.” But most people there are diabetics or carers of dia-, people with diabetes or people who work in care homes and doctors and nurses. They all come along because we get quite prominent people to do talks. And then it's question and answer. So it's very low key, very friendly. It's free. And we just encourage people to come along.

But what, if, if you imagine somebody asking you the question, “What, what would somebody get from a support group?”

Sharing experiences, realising that you're not on your own. Either the chance to talk to a consultant, a professor of diabetes, which you wouldn't normally do, but more importantly, to talk with other people on, either on just a one-to-one basis or in a little group. And I'm sure the problems that those, you know, one person has got, everybody's got, you know. So it's just a feeling that you're not on your own. You don't have to go. You can go to some meetings, you can go to other meetings. It's just to, to help with support and awareness, and to meet other people with diabetes that have got all the problems you've got. So you, you think, you know, “I'm not alone here.”
Previous Page
Next Page