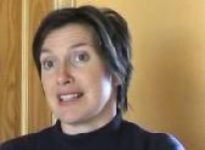 Shirley felt she was an expert in her own long-term neurological condition, but when it came to...

Shirley felt she was an expert in her own long-term neurological condition, but when it came to...

It was really, you know, knowing how I am and how I like to know about things, and how I like to be involved, and in control, and it's my life and I'll look after it myself, then I completely surrendered in pregnancy. And, you know, going into another pregnancy, then it will be different. I won't just surrender, because I know more about it and I know more about what happened to me after the first pregnancy so I will, I will be more thoughtful and more proactive.

Just say a bit about you, your, what you were saying earlier about sort of being an expert in one set of conditions and then this sort of feeling of novice stuff.?
Yeah, I don't know whether it was like symptom overload but I was quite au fait with what was wrong with me, and how that affected me and how I handled it, but then having other symptoms put on top which actually belonged to another condition called pregnancy, then that did seem like an overload, and I thought, “No, no, these people know much more about it than me and I'm, I'll just let them get on with it.” But which is quite bizarre because it was actually happening to me whereas I let them handle it...
But I feel very strongly that it won't be like that again.
See, I don't know really how my situation could be sort of replicated because I am in shock still at how much I gave over to health professionals. And actually they're professionals but they're not experts in me, only I'm an expert in me. And I can't believe that I surrendered so much [laughs]. It really is a big source of surprise to me.
Especially when you are so used to being the expert in your?
Oh yeah, but then ironically I gave over to the professionals and then it all went really badly wrong.
Yes, because you said you were questioning that the Heparin incident?
I actually said, “Are you sure I should have this?” And the nurse said, “Yes, it says so in your notes.” But actually the notes hadn't been checked so I shouldn't have had...
And you knew that?
I did, but because I was still in my sponge state of just accepting things being done to me then I said, “Okay.”
Previous Page
Next Page