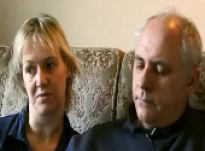 This couple had no doubts about ending their pregnancy because they felt their baby would have no...

This couple had no doubts about ending their pregnancy because they felt their baby would have no...

Mother' We went back Monday morning to see the specialist, and she said, yes, there was something wrong with the heart, and the head was not the right shape - strawberry-shaped - and she couldn't actually find a stomach on the baby. She couldn't say, she thought probably 80 per cent chance of Edwards'. She couldn't say without a, and our choices were then to have an amniocentesis, or she could arrange for a specialist to see us in [city] for the heart, which we opted for.

And just because there was an appointment free, we got one the next day, went up to the specialist in [city]. And, yes, the heart, there was at least 3 major heart defects, which would have meant an operation at about a few days old, an operation at a few months old, an operation at a few years old, and our baby would never have a healthy normal heart. She would always have problems. And I, there and then we didn't... well... we had the decision then to terminate.
Father' Yes.
Mother' We didn't actually discuss it I have to say. We didn't, we didn't discuss it, did we? I don't know how we...
Father' Well, we, they told us everything, showed us, he drew diagrams of what he thought was going on, and this... and he explained what would happen, you know. And so really the, it was so, he was very good, wasn't he?
Mother' Mmm.
Father' He explained it so well, that it was pretty obvious that the child wouldn't have a very good life.
Mother' Quality of life.
Father' Quality of life.
Mother' We didn't sit and discuss it. We were, we were sort of shown into a room with a midwife, and it was then said, sort of said, you know, “You should decide the future from now on, you could have an amniocentesis”. He again strongly suspected Edwards' syndrome. In which case Edwards' syndrome babies don't survive anyway.
Father' No.
Mother' They're non-compatible with life. Or we could, you know, carry on with the pregnancy, even if it did have Edwards' syndrome. Or if it was just the heart defects, carry on and have operations. But we didn't, I mean we just sort of, to us it was obvious to terminate I think. You know, we didn't need to discuss it with each other. We both felt...
Father' Yes.
Mother' The baby wouldn't have had a quality of life. At best it wouldn't have...
Father' My feeling was that it was cruel. It would have been more cruel to, for the baby to go full term and then die naturally, or suffer and die than it was to terminate. And that's how I looked at it, and still do.
Previous Page
Next Page