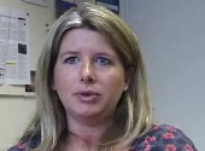 She talked to three or four different doctors, including one she saw a privately, before deciding...

She talked to three or four different doctors, including one she saw a privately, before deciding...

And then I think when I came to the booster one at 8 months that was fine, I just went ahead and did it. But I did start to worry after that when the 13 months sort of started to come up that the MMR thing, you know, this whole big debate. So I think basically I did a lot of reading, I spoke to a lot of people, spoke to about three or four different doctors, and I was very, very tempted to go for the single jabs, and I was prepared to pay the money because I was just too, you know, too concerned about the, the link with autism. But then, I don't know what it was, it was almost as if there was something inside me that suddenly just decided to get, to get her done.

And I'd spoken to a very good private doctor who'd convinced me that actually there was nothing wrong and he would go ahead and do the triple jab. So I went ahead and I booked her in and I got the, the injection done. And then literally the next afternoon at nursery there was a mumps, or was it, no, there was a measles case. And, and I don't know why I, but I just, you know, there was obviously something inside me that I had to do it that particular day, and then the next day this measles case came up. And, and she was, you know, she was fine, she hasn't, she hasn't got it. And so far she hasn't shown any strange behaviour, things towards the, the MMR. So I think in the end I was quite happy that I made the decision because, you know, having measles obviously is ten times worse.
Previous Page
Next Page