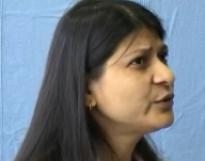 Age at interview: 20
Brief Outline: Discovered she was a beta thalassaemia carrier during her first pregnancy. Her husband was tested and is not a carrier. Their first daughter is a carrier. Video and audio clips read by an actor recorded in Urdu.
Background: Housewife, married with two children aged 3 and 5 months. Ethnic background/nationality' Pakistani.

As a Muslim, she feels screening can be useful, but termination is absolutely forbidden. You should accept your fate and pray. (Read by an actor.)

As a Muslim, she feels screening can be useful, but termination is absolutely forbidden. You should accept your fate and pray. (Read by an actor.)

I think if you could miscarry, if there is a danger to the child, then I should not have the test. I should have the testing done after birth. If there is a concern about the child dying or a miscarriage, then this is the greatest sin, is the formed child is miscarried. We consider it a great sin.

Right, I mean if you find out that this child would have this condition, in which he would have to have blood and could die in childhood, do you think that such a child should be terminated or not.

If you find out, we cannot terminate. It's the greatest sin, and God forbid, if it is born dead, then there is nothing that you can do. If it is born well, then you could have his blood tested and tell the doctor that he has this problem, and they themselves can think and say what should or shouldn't be done.

I wanted to know that why you had your husband tested. Why did you want to have it done?

This was for my own reassurance. God forbid if he had thalassaemia as well, and if I had it, then there would have been a problem for the child because of us both. There would have been a problem, like as the child gets older and older, and in the end he dies, then that's because of us. We should both have our blood and urine tested, and then we should think whether we want children or not.

Right. But I don't quite understand here, that you said that you had him tested, right, for your reassurance, but at some stage, you must have thought about what you would do if he also had thalassaemia?

What would I do? I would just pray to Allah. What else could we do? And whatever is written in our fate will happen.

Footnote' Screening for sickle cell and beta thalassaemia is performed using blood samples. Urine samples taken during pregnancy are to check other aspects of the health of the mother and baby.
Previous Page
Next Page